CORONA is not a laughing matter – The lighter side – 18

CORONA is not a laughing matter – The lighter side – 18

It is more than a month of the lockdown. There are a few more days, till May 3, to go in the second phase. The authorities would decide the future course of action. It is a matter of satisfaction that with concerted efforts by the governments and also cooperation by the public, we could prevent stage 3 that is the community spread of the virus. It has been officially confirmed by the Minister of Health Harshvardhan. The figure of positive cases hovers around 24,000 as of today. It is also good to know that the recovery rate is also good at more 20 percent as indicated by the experts. We need to be alert and ready for any further eventuality to ward off the danger of the corona virus and many more viruses inflicting the 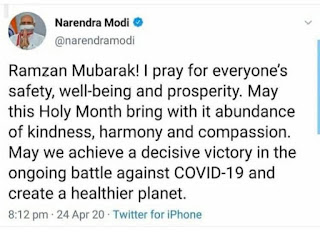 country. There is no point in elaborating this. The letter of 101 well placed citizens, who’s who, of the top echelons of the country and society have said it in their letter to the CMs of the states of India. I am confident that both the ruling outfits and the opposition parties and the intelligentsia would sit and consider the letter of 101 well meaning citizens of our country. All of them cannot be wrong particularly with regard to their concern on the communal scenario when they said, “The action of the Jamaat in organizing such an event, ignoring the Delhi Government’s advisories was, without question, misguided and condemnable. However, the action of the media in communalizing it and extending it to the Muslim community as a whole is utterly irresponsible and reprehensible.”

Coming to the lighter side, let us see what our friends shared in the social media to keep us going. We are a democratic country and an open society. There is a telling commentary on the functioning of our judiciary in the present context. I share it here as “Food for thought”:

One of my poet friends,  Paramjit -  shared a set of 30  proverbs which would make entry into our daily conversations in the post Corona scenario. A few of them -

1) Divided we live, United we die.
4) Home stay is the best policy.
10) Better to be poor and healthy than rich and sick
12) Distancing is the best part of Valor.
13) Don't count your chickens before next March
20) Rome wasn't infected in a day

One of my regular sources of matter for the blog is the Senior Citizens Group at the Silver Residency Apartments, my humble abode in Jalandhar. Judge for yourself:

As usual, let me close with a CORONA Expression of my colleague Ambassador Zile Singh

Corona has put a pause on activity.
All are inactive, a newfound equality.
I miss all those to whom I was unkind.
Now I realize, that I was colour blind.
Hell with Corona, eyes on rising Sun.
The bane of Corona is a thinking citizen.

"Let us be thinking Citizens and avoid communalism."

Posted by ramesh chander at 6:39 AM