The Dussehra or Vijay Dashmi celebrations on October 19 turned out to be an avoidable tragedy in Amritsar in which more than 60 people were killed and more than 100 seriously injured on the rail tracks by a speeding train. The unfortunate, mostly poor migrant workers, crowd watching the burning of the effigies of Ravana and his associates or the Ravan Dahan near the rail tracks got involved in the tragic accident. Such incidents are repeated reminders and wake-up calls to both the administrators and the society that we are 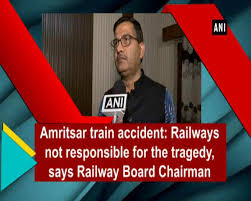 still to go a long way to become a sensitive and a civilized society. There is no point in bragging about our claims of a glorious past unless we transform our present to at least a dignified and sustainable standard. We are yet to pay due attention to these realities of life.

An immediate provocation to write on the subject is the demonstrated and visible hypocrisy by the elite in the administration, concerned outfits, politicians and the media. The law and order authorities and the civil administration have no time and mind to think and plan the public events to ensure public safety and security. They remain busy in catering to the VIP led requirements. The agencies which provide public utilities and services, railways, electricity, public transport, fire control, first aid among others, are awfully negligent and dismissive of public concern. It seems we have mastered the art of blame-game to wash our hands. Politicians are self centered to the extent that they are alive only to their limited agenda of vote banks. The media, both ‘the Sarkari and the Durbari’ i.e. the government controlled and the pliant ones, is totally lacking commitment to public concerns and interests. Unfortunately, with every passing day, things are getting worse. It is a matter of deep concern and worry. We cannot afford to be oblivious to these ground realities, if we want to see our polity and society to stand up and face the challenges of development and progress.

I don’t feel like closing this without mentioning a very disturbing element which has surfaced, of late, in the functioning of our media, particularly the mushrooming TV channels. It was dismaying to watch the Amritsar incidents of yesterday on some of the TV channels, the Bhagat or the Durbari channels. The worthy anchors, while pronouncing that these incidents should be above political considerations, they themselves were busy in politicizing the matter by naming and blaming Navjot Kaur Sidhu wife of a Punjab Minister Navjot Singh Sidhu of the Congress party for the incident. The surprising element was that the script of their presentation was identical as if it was handed over to them by some other vested agency. Who that agency could be, it is anybody’s guess. It is a matter of shame and is the bane of our democratic system. The so called fourth pillar of our polity has failed us.

There is no point in blaming the innocent crowd who went to see and join the festivities of Dussehra. They need to be educated and informed by the concerned authorities of the “Does and Don’ts” of such gatherings. The administrators and politicians should be caring and sensitive. The media should be vigilant and not pliant to the power centers. But unfortunately they crawl where they are asked to bend and still they pat themselves to be called free and fair. We are to go a long way.

Today is October 2, birth anniversary of Mahatma Gandhi. With a view to pay befitting tributes to the Mahatma, PM Narendra Modi started a well-meaning programme on the day in 2014 – Swachh Bharat Abhiyan i.e. Clean India Campaign.  There should be no hesitation in admitting that India is one of the dirtiest countries in the world. It is a matter of shame for all of us. It is well documented that Mahatma Gandhi realised the importance and need of cleanliness and he even said, “Sanitation is more important than independence.” He also said, “Everybody must be his own scavenger.” We Indians also boast of a people of culture and lofty traditions. How come then India remained one of the dirtiest countries? These issues need to be addressed. PM Modi’s government tried to flag the issue through the Swachh Bharat Abhiyan and rightly so. The government has also claimed that good work has been done in this regard. The target was to make 90 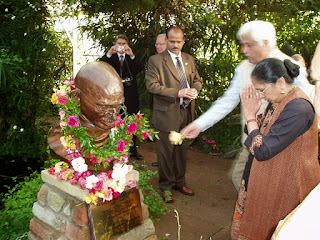 million toilets by October 2019, the 150th birth anniversary of Mahtma Gandhi to end the dirty and uncivilised practice of open defecation. Yes, some progress has been registered and is visible on ground. But most of the activities and programmes, unfortunately, remained cosmetic and photo opportunities. It is a matter of regret. PM Narendra Modi’s expectations made at the launch of Swachh Bharat Abhiyan in 2014 mostly remained on paper. He said,”I am sure you have heard time and again that cleanliness is next to godliness. Alas, things are often different when it comes to putting this into practice.” It is a national shame that still every year more than 300 safai karamcharis die cleaning gutters and sewers. It is pertinent to add that much more needs to be done not only by the governments but also by ‘We the people’ - the civic society at large.

Why the cleanliness campaign of Mahatma Gandhi in good old days and now of PM Narendra Modi could not take off as it should have? The reasons are obvious. The visible and immediately noticeable reasons are, of course, poverty, illiteracy and under development, India being a poor and developing country. We need to set our priorities and watch the pace of economic development and overall wellness of the society. The real reasons, to my mind, are deep rooted in our history and tradition and even religion which justify and glorify the dirty work of manual scavenging under the garb and pretext of Manuwadi dictum of caste system. On one hand Mahatma Gandhi said that one shall be one’s own scavenger and on the other glorified the caste sanctioned manual scavenging as “sacred”. I don’t understand ‘How sacred is this work of scavenging?’ PM Narendra Modi also termed it as “experience in spirituality”. Yes, it may be true for those who are not condemned to do and undertake this most inhuman and degrading activity but 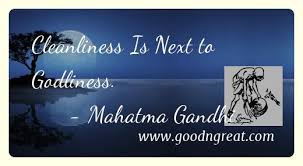 not for those who are made to do it to earn their livelihood and live a wretched life. We often succumb to the ritual of discussing Swachh Bharat in the august houses of parliament and legislatures and talk of Millennium Goals from the high tables of the UN. The real problems are often side-tracked under the pretext of tradition and social cohesion as ordained in the texts justifying the caste system. Swachh Bharat Abhiyan is much needed and must be supported whole heatedly. Let us start it with sincerity and will both on the part of the governments and the society:-

-         Hit the caste system. Swachh Bharat is not the responsibility of the Safai Karamcharis (sanitation workers) only mostly belonging to the Scheduled Castes of Valmiki extraction.

-         Stop justifying or glorifying this dirty work of manual scavenging as ‘sacred’ or ‘experience in spirituality’. It is the most degrading and inhuman work. Let us start this sacred work and get the experience in spirituality right from our own homes without waiting for the Safaiwalas who otherwise are not even allowed to drink and eat in the house. As PM Narendra Modi himself said, “The dream of swacchata cannot be achieved even if 100 Mahatma Gandhis or 1,000 Narendra Modis or even all the CMs and governments come together, but if 125 crore Indians come together that dream can be easily fulfilled.” The organizations like RSS and SGPC, among other, need to involve themselves in this huge task to change the societal ‘mind set’ that safai is required to be done by so called Bhangis and Valmikis alone.

-         Take remedial measures to end and stop almost 100 percent reservation in posts of Safai Karamcharis. The votaries of ‘No Reservation on the basis of caste”, the so called General Samaj or Upper Castes, shall get their due and rightful share in these posts. Otherwise they should stop crying from the house-tops against the caste based reservations.

-         We have made many successful strides in technology and science. Why aren’t our technicians and scientists encouraged to develop cost effective mechanical or electronic equipment to clean the gutters and sewerage? Why don’t our local bodies tend use the already existing technology to carry out the dirty work, thus relieving the safai karamcharis from such degrading and inhuman jobs? Provide safety gears and sensors for toxic fumes to safai karamcharis to make their job somewhat less hazardous. Invest and make appropriate budgetary allocations to address these issues. Mere lip service will not do.

With this I pay my tributes to Mahatma Gandhi on his birth anniversary and wish Swachh Bharat Abhiyan further success.

Posted by ramesh chander at 5:27 AM 8 comments: