By the Way - Without Comments

" We were t0 participate in the non-aligned meeting to held in Lusaka (Zambia) in 1970. Sardar Swaran Singh, then Foreign Minister, used to chair briefing sessions of the Indian delegation gor the summit. At one 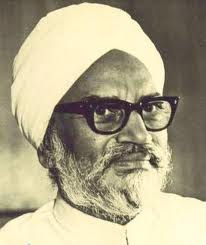 such meeting, Sardarsaab turned to the then Foreign Secretary, T.N. Kaul, and asked whether we had a region-wise break-up members of the non-aligned countries - from asia, africa and elsewhere. Mr. Kaul obviously did not have this kind of nitty-gritty information at his fingertips and looked at us to provide the information. As I raised my pencil to catch the attention of Sardarsaab, he said in Punjabi-Hindi: " Dikshat, tu Joint Secretary Narendra Singh nu dus; Narender foreign secretary nu batayenga; and foreign secretary muijhe batayenga. " Deputy Secretaries were not supposed to break the chain of command even in discussions. They had to be put in place. "

Shri Bhagwan Das (April 1927 ) passed away ( attained Parinirvana ) in New Delhi on November 18, 2010. He was a renowned scholar, intellectual, researcher of the philosophy and mission of Lord Buddha and Dr. B.R. Ambedkar. His contribution to the dalit literature is considerable. The dalit community has lost one of his worthy sons in the death of Shri Bhagwan Das.

I had two op 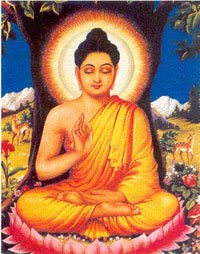 portunities to see him in action long time before. I heard him speaking at a function at the Ambedkar Bhawan at Nakodar Road in Jalandhar in late sixties when I was a young student. I read him many times in the columns of the Bheem Patrika which is edited and published by Shri Lahori Ram Balley, an associate of Shri Bhagwan Das in his research and immense contribution to the Buddhist and Ambedkar thought. The second time I met him at the House Warming ( Greh Pravesh) function of one of my colleagues who was also a Buddhist in Munirka DDA flats in New Delhi amidst the peace giving chants of ' Buddham Sarnam Gashameen'. I was impressed by his personality and knowledge.

Bhagwan Das was a self made man. He educated himself with great effort and dedication from a mere Matriculate when 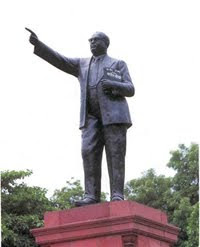 he started working in the Royal Air Force and a Clerk in the Department of Labour and the Controller of Accounts to an MA and then a law Graduate in Delhi. Apart from his intellectual pursuits, he was a successful practising lawyer at the Supreme Court of India. He worked with Dr. Ambedkar as his Research Assistant. Bhagwan Das compiled 4 volumes of the speeches of Dr. Ambedkar and published them as 'Thus Spoke Ambedkar'. As a true disciple of Ambedkar, he was a crusader against social inequality and discrimination. In 1983, Bhagwan Das gave a testimony against the caste system and untouchability in India before the UN Sub-Commission on Human Rights in Geneva. I recently saw a documentary ' Navayana ' - Bhagwan Das - In pursuit of Ambedkar which is good and informative. The passing away of Bhagwan Das is an irreparable loss to the community and the society at large.

The Countdown - The End of a Facinating Journey 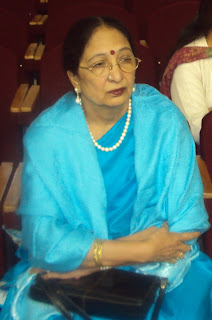 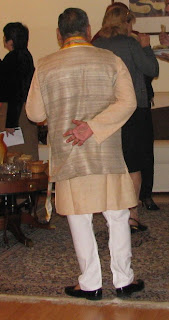 The ' Hi ' and ' Bye ' is an important aspect of the game called diplomacy. We have experienced the both, the happiness and the pain, of the process in the four decade long but fascinating diplomatic journey beginning in March 1970 and coming to an end on December 31, 2010, the day I retire from the Indian Foreign Service. It was a most satisfying and rewarding experience. I say this with a great sense of contentment and humility that from a humble beginning as a Clerk in the Ministry of External Affairs, I could become an Ambassador. I have no regrets and complete my first inning successfully and get ready for the second of which I will workout the details in due course.

The countdown for the first leg of the journey has started. My wife Vidya, who remained a constant companion throughout, has started the process of binding up in Minsk. She hosted a 'Good bye Reception' at India House for the members of the Minsk Diplomatic Ladies Club on November 18. She told me that it turned out to be an emotional event. Along with traditional parting gift of a set of Belarusian table linen, there is an entry in the coffee table b 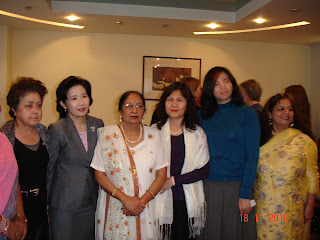 ook 'Minsk and Surroundings' by the ladies from the Turkish Embassy and I quote " ....we love you and respect you and will remember you all the time. We love India and the Indian movies." A diplomat's success gets manifestation when the country he or she represents gets recognition and comes in the reckoning. I feel good in writing that though Vidya has a limited ability to communicate in English yet she has a god given attribute to make friends with her earthy and simple style and manners. It is satisfying to note that we could make it together. The nature of a diplomat's work and job is such that the lady at home has to be fully supportive and engaged. Vidya fitted the bill. Jawaharlal Nehru, speaking in the Parliament in the early years of the founding of the Indian Foreign Service and referring to the wives said that we pay salary for one and employ one and a half. Of course, Vidya is my better half.

I will write again on the process of The Countdown -The End of a Fascinating Journey.
Posted by ramesh chander at 7:15 PM 6 comments:

OUR DIWALI AT STOCKHOLM

I, alongwith my wife Vidya, came to Stockholm to be with our son Naresh and his lovely family - Anju, Pallavi and Arvind on the Diwali festival. I found Palloo and Abi totally excited. They took extra pains in seeing that we were comfortable in whatever small way they could think and belong to their grand parents. We felt very good. God bless them. They are lovely children.
Now a days, generally, I tend to keep such visits as a private affair but Naresh's circle of friends is good and hospitable and it is just not possible to sit at home. The week of Diwali, obviously, remained fully busy parting and enjoying in and around
Stockholm. We started with a small friendly but impromptu dinner at home on November 3 over a session of cards which is by now is traditional must on the Diwali. Inder & Poonam treated us over a heavy dinner on November 4 at a wonderfully done new villa in the outskirts of Stockholm and we again ended up with a session of cards. The Diwali day, November 5, strated with exchange of greeting on the FaceBook which is increasingly becoming an essential routine. Naresh planned to
take us out for lunch for a change at a Pakistani Dhawa owned by the brother of one of our old friends, Salim and Salma. But it was not to be. Ajay & Anmol, friends of Naresh & Anju insisted to lunch with them to which we could not say no. Ajay thoughtfully ordered some of the dishes from the same Dhawa where we inteded to eat. It was good and we enjoyed the lunch. The after dinner party was hosted by Seema and Stephen, a mixed Indian and Swedish couple with a twin purpose to celebrate Diwali and do the House Warming of their redone villa in Upsala. It was a fair mix of Indians and Swedes. We were happy to see the culutual
mix with Swedes dressed in traditional Indian Kurta Piyjama and Saree. Some of the Swedes both gents and ladies were even playing cards (Indian poker- Teenpati). The Diwali weekend i.e. Novermber 6 and November 7 was fully loaded with further fun. A 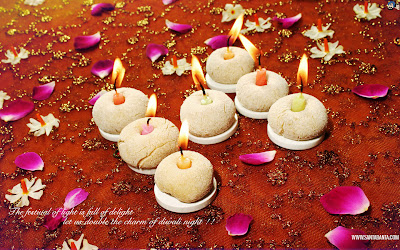 nil and Lena, again a mixed couple and long time friends of Naresh and Anju organised a big Diwali dinner. It was good. We could meet many of the friends circles in Stockholm at one go over a good meal. Anil, I know personally, is a good cook himself. Children enjoyed the fire works and we, as usual, ended up with session of Teenpati. It was a good fun. It was a different flavour the next d
ay, a musical evening of traditional songs with Pakistani friends at the residence of Kuldip and Indu. We could meet again a very cultured couple Mushtak and Farida and listen to Khawaza Sisters from Pakistan singing good old Punjabi songs on the beats of Dholak. Anju who herself sings and enjoys joined them and added to the sitting.. The hosts Kulip and Indu, to my surprise, sang almost professionally both as karoke and otherwise. The Diwali week and our short leave turned out to be fully rewarding with a fun filled festive activity. We are grateful to all our hosts and friends of Anju and Naresh for a wonderful time we spent in Stockholm. God bless them all. Ofcourse, Naresh Anju, inspite of their busy schedule, planned our holidays very well.
We will go back to Minsk tomorrow the November 9 with the hope that we will come back again to continue our connection and friendship in the eautiful city of Stockholm.
Posted by ramesh chander at 1:25 PM 2 comments:

THE FESTIVAL OF LIGHTS - DIWALI

Tomorrow, November 5, is Diwali - the Festival of Lights. It is one of the most important festivals of India which is celebrated through out the country and abroad with great ferver and festivity. Without going into the religious or denominational aspects of it, I personally feel one shall tend to jointhe mainstream of the society in celebrating and enjoy the movements of joy and festivity and bring cheer to ones ownself and the society at larde in these days of strife and tension. I think it is good enough a reason to celebrate Diwali. Diwali is also celebrated in many more countries like Nepal, Sri Lanka, Myanmar, Mauritius, Guyana, Trinidad & Tobago, Suriname, Malaysia, Singapore, and Fiji.
The Diwali is an important occasion in the lives of the Hindus - Lord Rama returned back after excile and defeating Ravana, the Jains - Lord Mahabira attained nirvana and the Sikhs - Guru Hargobindji alongwith many more were released from the Mughal prisons and Sikhs observed the day as the Bandi chod Diwas.