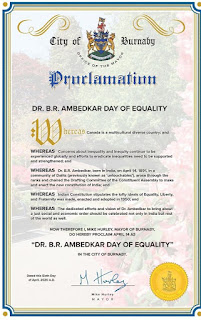 Day of Equality. This thoughtful gesture, it seems, will set the ball rolling to get the Day declared as “International Day of Equality” by the international community in the days to come to realize the lofty goals of bringing about equality to strengthen the resolve of living in peace and harmony.  The City of Burnaby deserves all praise and appreciation in this regard. The Proclamation reads:

“Whereas Canada is a multicultural diverse country; and
Whereas concerns about inequality and inequity continue to be experienced globally and efforts to eradicate inequalities need to be supported and strengthened; and,
Whereas Dr. BR Ambedkar, born in India, on April 14, 1891, in a community of Dalits (previously known as ‘untouchables’), arose through the ranks and chaired the drafting committee of the Constituent Assembly to make and enact the new constitution of India; and
Whereas Indian Constitution stipulates the lofty ideals of Equality, Liberty, and Fraternity was made, enacted and adopted in 1950; and
Whereas the dedicated efforts and vision of Dr. Ambedkar to bring about a just social and economic order should be celebrated not only in India but rest of the world as well.

NOW THEREFORE I, MIKE HURLEY, MAYOR OF BURNABY, DO HEREBY PROCLAIM APRIL 14 AS

Councillor Sav Dhaliwal of the Council of City of Burnaby in association and cooperation with Chetna Association of Canada under the leadership of Jai Birdi and his colleagues played a good role in decision of the Burnaby City. They deserve to be congratulated for this great job to honour the greatest son of India, Babasaheb Ambedkar. While reading the Proclamation, Councillor Sav Dhaliwal rightly said, “While Dr. Ambedkar was born in India, his mission for equality is relevant across the globe”. He added, “We are also proud to have Dr. Ambedkar’s portrait enshrined in the deliberation room at the city as a reminder to uphold values of equality when the council is making significant decisions”.

It will not be out of place to give a brief background to the proposal of “International Day of Equality” with a view to solicit wider support to issue. The proposal was made by Ambassador Ramesh Chander to the Government of India through the then Minister of External Affairs, Sushma Swaraj in May, 2015 when Government of PM Narendra Modi decided to officially celebrate the 125th birth anniversary of Dr. B.R. Ambedkar. It was duly acknowledged by the UNES Division of the Ministry of External Affairs. Ambassador Ramesh Chander approached the stake holders and solicited their support in the matter. Many outfits and individuals like the Chetna Association of Canada, Federation of Ambedkar and Buddhist Associations of UK, Ambedkar Mission Society and Ambedkar Bhawan Trust of Jalandhar and also Forum of Schedule Caste MPs and MLAs of India under the patronage of the then Speaker of Punjab Assembly Sardar Charanjit  Singh Atwal. They all, it was a matter of satisfaction, extended due help and supported the proposal.  The Forum made a demarche to PM Narendra Modi in November; 2015 and requested him to make a demarche to the UN, in turn, to declare April 14 as “International Day of Equality.
In pursuance of these efforts, the 125th birth anniversary of the great leader, Babasaheb Ambedkar, was celebrated on April 14, 2016 at the UN in New York where the proposal of “International Day of Equality was duly registered with the UN and the international community. Ambassador Ramesh Chander and the other stake holder in the matter, ever since, have been reminding the Government of India and other authorities off and on to get April 14 declared as ‘International Day of Equality. Some of the media organs like the Ambedkar Times, Desh Doaba and The Bheem Patrika extended their whole hearted support to the proposal of “International Day of Equality”

“The City of Burnaby has shown us the way. I am confident that the Government of India, the UN and the international community will consider and work together to celebrate Equality to bring about peace and harmony in the strife torn world”, said Ambassador Ramesh Chander in a message to the Mayor of the City of Burnaby through Jai Birdi, Secretary General of Chetna Association of Canada.