“No fundamental social change occurs merely because government acts. It's because civil society, the conscience of a country, begins to rise up and demand - demand - demand change.” It is a quote from the President Elect Joe Biden of the USA, the oldest and vibrant democracy of the world. Taking a cue from this, we, some of the residents of Jalandhar and its periphery, decided last week, on December 18 to float an outfit, Punjab Civil Society, to discuss and brain storm matters of interest and concern to Punjab and the society at 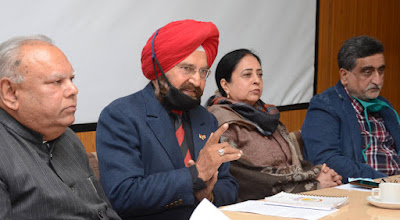 large as stake holders in the development and progress of the society. It seems, some of us namely; Community Activists Sanjay Kumar, Rakesh Shantidoot, Raman Kumar among others did the necessary ground work in this regard. My association with this endeavor started recently with my meeting with Sanjay Kumar of Delhi followed by an informal meeting of likeminded fellow citizens on a chili afternoon on December 17 at the spacious home of Raman Kumar which was attended by MLA Pargat Singh, Principal Navjot Kaur, Col. Balbir Singh, Dr. Nachattar Singh, Ravinder Dhir among others, besides initiators of the idea Sanjay Kumar and Rakesh Shantidoot. It was agreed to float Punjab Civil Society as a safety valve in the process of political and socio-economic development of our country. The current issue of the farmer’s agitation – Kisan Andolan was discussed and it was decided to support the just cause of farmers and ward of the possibilities of the situation going out of hand. It was also decided to announce the formation of Punjab Civil Society and give our views and extend support to the ongoing farmer’s agitation over an interaction with media. With this introduction, it will not be fair on my part if I don’t add a line, with a sense of gratitude, to thank our hosts for hot Amla-Honey concoction and Masala tea with assorted dry nuts and other savories to beat the seasonal chill at the cozy home of Raman Kumar.

Accordingly, we met at the Training Institute of Co-operative Bank in the heart of Jalandhar, the venue kindly offered gratis by the Director of the Institute, Dr. Nachattar Singh. It was gratifying to note that it was a well attended meeting represented by cross sections of the civil society and media. Rakesh Shantidoot set the ball rolling by his opening statement giving the purpose and agenda of  Punjab Civil Society and also his views on the Kisan Andolan followed by 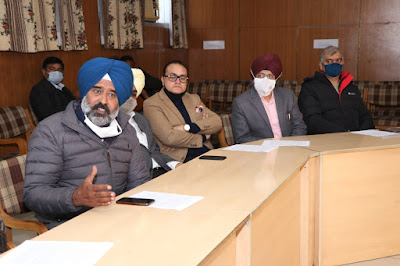 brief interventions, inter alia, by Ambassador Ramesh Chander, Col. Balbir Singh, Principal Navjot Singh, Ravinder Dhir, MLA Pargat Singh, Raman Kumar. The meeting turned out to be, as expected, a productive and informative interaction with media. Prominent media personalities like Major Singh, I.P. Singh, Surinder Paul among others welcomed and appreciated the newly floated outfit Punjab Civil Society and gave an overview of the prevailing political and socio-economic situation in the country with particular reference to the ongoing Kisan Andolan. In a handout issued at the meeting, Punjab Civil Society appealed to all Punjabis to come forward to serve and save Punjab and give it a right direction, with their active participation, to come out of the existing difficult situation.

I conclude here with the hope that Punjab Civil Society would succeed in doing its intended work to bring about peace and harmony in the society. My initial interaction with some of the highly placed members of the Society has generated very positive vibrations, I must add. I was reminded of Martin Luther King Junior who said and I quote, "Our lives begin to end the day we become silent about things that matter”

Posted by ramesh chander at 8:13 AM No comments:

December 6 was the death anniversary (1956) which is also known as Parinirvan Diwas in Buddhist parlance. It is a matter of increasing satisfaction, in successive years, Parinirvan Diwas of the greatest son of India, Babasaheb Ambedkar is also observed befittingly as his birth anniversary on April 14. It is enough to guess that how potent and relevant his legacy is not only for India but for the world at large. Both the Indian society and polity consciously ignored Ambedkar primarily due to the fact of “manuwadi mindset”. But it could not be sustained for long – Satya Mev Jayate – Truth Always Trumps. I am reminded of an Urdu couplet:

Rightly so, I remained busy in various functions to pay homage to the great icon of humanity, Babasaheb Ambedkar. The main function to observe the Day in Jalandhar was held at Ambedkar Bhawan, the nerve centre of community activities in the area undertaken by the Ambedkarites, as usual organized by Ambedkar Bhawan Trust in coordination with Ambedkar Mission Society and Punjab Chapter of Samta Sainik Dal. It was a well coordinated and well organized 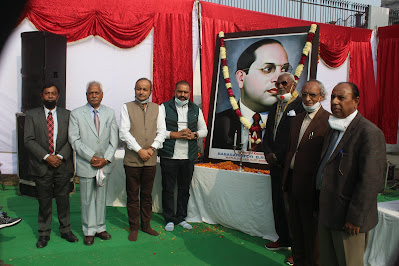 function held in lawns of the Bhawan on a bright sunny day. The Chief Guest at the function was young and dynamic politician of the community MLA Sushil Rinku who was accompanied by yet another MLA, Rajinder Berry. Dr. Gian Kaul and Dr. Ram Lal Jassi, senior Trustees of Ambedkar Bhawan Trust paid rich and wholesome tributes to Babasaheb and set the ball in motion. Chief Guest Sushil Rinku paying befitting tributes to Dr. Ambedkar made an emotional speech and said if he could not something for the community, there was no point in his joining public life as a true Ambedkarite. He promised to stand with the Trust to do their very best in the further development and progress of the hub of the community affairs – Ambedkar Bhawan. Noticing my presence in the audience as an initiator, he consciously and rightly made a reference to the proposal on April 14, birth anniversary of Babasaheb Ambedkar as International Day of Equality and said that he was confident that these efforts will succeed, sooner than later, in according due space to the greatest son of India. Editor Bheem Patrika, Lahori Ram Balley, a legendary Ambedkarite spoke with conviction, as always, and urged the community and the country to get awakened to meet the challenges 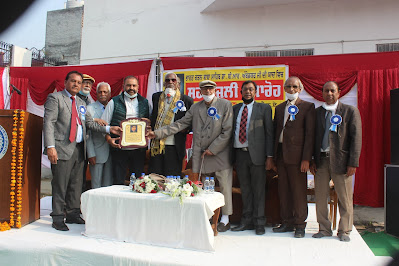 of the near future in terms the lofty ideals and directions stipulated by Babasaheb Ambedkar in the constitution of India and otherwise. Three resolutions were passed by voice vote at the function as a commentary on the prevailing situation in the country – i) Condemning Central Government’s decision to discontinue post matric scholarships to dalit students ii) Supporting ongoing Kisan Andolan and iii) Condemning the so called ‘Love Jihad’ laws.  It was rewarding to be there and listen as a humble tribute to Babasaheb on his Parinivan Diwas. 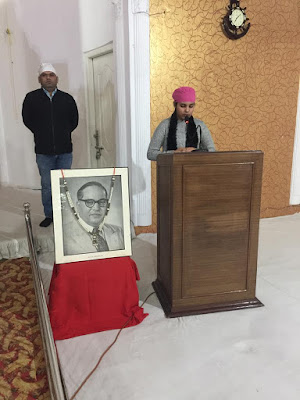 Babasaheb Ambedkar has been traditionally celebrated and remembered with great sense of gratitude in and around Bootan Mandi in Jalandhar, the epic centre of dalit consciousness for long, even during the life time of the great leader. In the evening, a solemn congregation was held at Satguru Ravidass Dham at Bootan Mandi which was led by Swami Balram Rai Virdi and Presidsent of Shri Guru Ravidass Educational and Charitable Trust, Om Parkash Mahey. After the traditional kirtan, missionary poet Param Dass Heer paid poetic tributes to Babasaheb. It was a matter of great satisfaction that, of late, more and more young girls were
participating in such programmes – Himani and Jyoti and Social Activist Rani Puri made brief speeches followed by a budding missionary song writer and singer Babli Virdi. It was just a coincident that all of them spoke with one voice on the importance and need of  education  in the community as underlined by 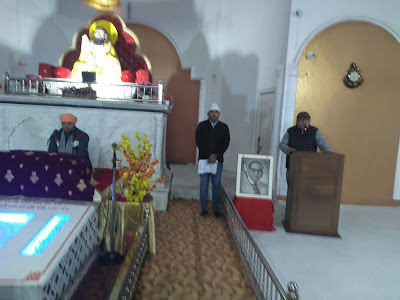 Babasaheb and the theme of their presentations was that the dictum ‘Pen is mightier than sword’ as demonstrated by the great icon Ambedkar himself. Social Activist and Trustee Paramjit Mahey spoke with aplomb on the role and contribution of Babasaheb in reforming society and setting the direction of the polity of the country. Finance Secretary of the Trust Amar Nath Ram spoke at length and highlighted the struggle of Babasaheb for the betterment of the society and progress of the country. Prof. Mahesh Chander, as usual, conducted the congregation aptly which was concluded by a Vote of Thanks by President Om Parkash and Adras by Swami Balram Rai Virdi.

I pay my own homage to Babasaheb for his sterling contribution in instilling confidence in the minds and psyche of downtrodden people as aptly wrote by Charan Dass Nidhadak: