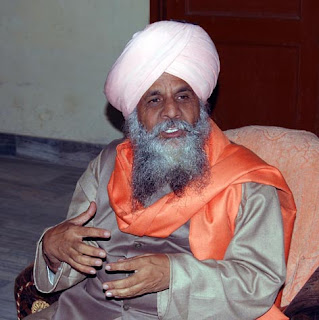 I wanted to write about Swami Gurdip Giri, Head of the Swami Jagat Giri Maharaj of Pathankot (Punjab) just to pay my respect to him and in recognition of the good work the Dera is doing, under the stewardship of Swami Gurdip Giri., in and around Pathankot and Jammu ( J & K ) some districts of Himachal Pradesh. I also personally know that Swami Gurdip Giri is not only popular and revered in Jalandhar and many areas of Punjab but also abroad particularly among the dalits and followers of the great Guru Ravidass. The immediate motivation or provocation to do so now is the news item in the daily Tribune “Good Samaritan providing free education to kids of ‘poor’ bootleggers” appeared on May 31. Anyway, it is better late than never. Swami Gurdip Giri certainly deserves full appreciation and support in this noble task.


I met Swami Gurdip Giri in the summer of 1999 at our small flat in Kalkaji, New Delhi. At that time, I was the Director of Central Asia Division in the Ministry of External Affairs. Swamiji was to visit the UK and required visa. Community activist Ram Dhan of Jalandhar who was known to me accompanied Swamiji. My brother Kishan also spoke and advised me to help swamiji in whatever way I could as he enjoyed a large following and goodwill in the Sialkot community in the Bastis of Jalandhar. They stayed with us. I dropped them at the UK High Commission with my visiting card meant for the visa officer. Fortunately, Swamji got the visa the same day. I was happy and Swamiji was happy. These are some of the small details of our first meeting. I was fully impressed by Swami Gurdip Giri particularly by his unarming simplicity. He earned reverence rather than commanding it. Unlike many spiritual personalities, who except respect, I found Swamiji just natural and simple. But he commanded an aura inviting respect and regard. He beared with me, particularly my not so religious or spiritual orientation and some of the rituals and mannerism attached to such occasions. I think he felt my genuine respect and regard for him. I also fully recognized his high acceptance and position in the society. Swamiji came back from his maiden visit to the UK and again blessed us and stayed with us along with some his close followers who came to receive him. We were happy to further cement our connection and association with Swamiji. Swami Gurdip Giri’s life and mission exactly conforms to the mission and philosophy of the Dera Jagat Giri based on the teachings of Guru Ravidass, as stipulated in the website of the Dera:

Dera Swami Jagat Giri ji Maharaj was founded to spread the mission and follow the teachings of Guru Ravidas ji Maharaj to :-

The write up ‘Good Samaritan- Providing free education to kids of ‘poor’ bootleggers’ fully endorse the good work of the Dera and his current mentor Swami Gurdip. I join the applaud.


In spite of my diplomatic assignments abroad, I could maintain my connection with Swami Gurdip Giri through my brother Kishan and our other relations in the community who were close to Swamiji. It is a matter of satisfaction for me. I am told that Samiji is a well respected personality not only in the dalit and other poor sections of the society but also the society at large. His satsang sittings are hugely liked and popular by the common man and rightly so.
My next meeting with Swami Gurdip Giri was at the marriage of my daughter Vaishali in December, 2001. I was not physically fit to be active due some serious sickness. Al the arrangements were done by my brothers Kishan and Pammi. Swamiji was also invited to the marriage. I am happy to note with gratitude that he blessed my daughter with his visit to our home at Bootan Mandi, Jalandhar on the eve of the marriage. I and my wife Vidya and obviously my brothers were humbled by the gracious gesture. I distinctly remember that Swami is spoke to my daughter and invoking the sabad of the guruvani of Guru Ravidass “sh kI swr suhwgin jwnY ] qij AiBmwnu suK rlIAw mwnY ]” to bless and advise her. I was further impressed by his sermon and grace. I had an opportunity to visit Swamiji at his Dera in Pathankot along with my wife who was very keen to pay our respects to Swamiji. My brothers who arranged the meeting and the visit also accompanied us. Swamiji was very kind to us. He very kindly and graciously blessed us and honored me with a ‘Saropa’in the congregation. We were further humbled. My mother died in 2006. I came for the final Ardas/Bhog ceremony from Prague where I was posted. On arrival, my brothers told me that Sami Gurdip Giri has been requested to bless us on the occasion and address the solemn congregation. I was happy. Swamiji honored and blessed us. In the process, he remained a source of inspiration and Gods grace on us.
Swami Gurdip Giri is doing tremendous work for the spiritual, educational and social upliftment of the poor masses and weaker sections of the society as rightly brought out in the said item in the Tribune without any fanfare. We all shall support him in his endeavors and wish him God speed.
Posted by ramesh chander at 10:07 AM 12 comments: