India´s decisive victory in the Kargil War of 1999 with Pakistan is observed as Vijay Diwas on July 26. The day is observed as a solemn occasion to pay tributes and salute the martyrs of the war. We are in Stockholm on vacation but our hearts go back to India to be with our countrymen in remembering the brave jawans and young officers of our armed forces who sacrificed their lives in the defense of our motherland. 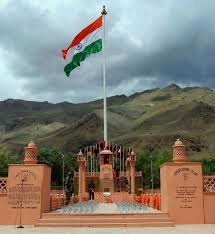 The Kargil war of 1999 was the mis-adventure of Pakistan imposed on India. While was India was in the process of consolidating the gains of PM Atal Bihari Vajpayee´s Bus Yatra to Lahore, the Pakistani leadership under PM Nawaz  Sharif and spear headed by all powerful army commanded by General Parvez Musharraf had other plans to trouble India. India was taken by surprise. Frankly, It was a big failure of our intelligence agencies and also of the military brass. Indian leadership under PM Vajpayee immediately realized the mistake and took action. It was a fiercely conducted war on the inhospitable heights of Kargil. Our valiant armed forces rose to the occasion and defeated the enemy and drove them back. The stories of velour and bravery by the young officers and brave jawans of the Indian armed forces are legendary.

India is a responsible country. Pakistan´s ill founded ambitions needed to be nailed. Our forces did it on ground in Kargil. India´s political and diplomatic machinery convinced the international community of the Pakistani designs which were aimed to threaten not only the security of India but also the international peace. I was the Director of Central Asia Division of the Ministry of External Affairs in 1999. In our diplomatic offensive, we took appropriate action and kept the diplomatic missions in Delhi fully informed and briefed of the developments.

Fifteen years have passed since the Kargil war. India learnt a few lessons from the war. Our intelligence agencies and also armed forces are better equipped to deal with such exigencies in the future. The Subrahmanyam Committee  set up in the after-math of the Kargil war, made useful suggestions which helped not only stream lining the policy making process but also operational aspects of such incidents. Proxy war by our enemies remain and continues. India needs to be awake and ready to meet the challenges.

Posted by ramesh chander at 1:42 PM