All political parties are gearing up for the forthcoming assembly polls due in the first quarter of next year, 2022. Akali Dal and BSP have taken the lead and announced their joining hands on June 12 to challenge the Congress hold on power with much hope and promise. 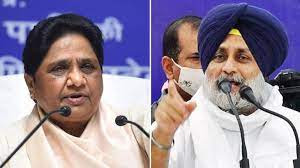 Congress Party and BJP are still in the process of finalizing their plans and strategies. Akalis severed its long standing partnership with BJP recently in the wake of Farm Laws and farmers’ agitation and was obviously needed additional support to unseat the Congress Party.  BSP was the only option with a view to attract dalit support in this regard. On the other hand BSP also required boosting their aspirations to grab power as their cadres were getting restless and disgruntled. Out of 117 seats of the assembly, BSP will contest 20 – 8 in Doaba, 5 in Majha and 7 in Malwa ( 12 reserved and 8 general seats) against their expectation of about 25 seats and Akali Dal will have the major share of 97 seats. This share of 20 and 97 seems fine as BSP has lost its share of votes over the years from more than 15% in 1996 to less than 2% in 2017. There are many ‘ifs and buts’ on the likely outcome of the alliance between Akali Dal and BSP, given the history of their political conduct in the past. In 1996, both the parties contested the Lok Sabha elections together and registered a huge victory by grabbing 11 seats (3 BSP and 8 Akalis) out of 13 seats. Manyawar Kanshi Ram himself was steering the wheels of BSP. Later, Akalis ditched the alliance with BSP and joined hands with BJP in the next assembly polls in 1997. It generated confidence deficit on both the sides. Now after 25 years, they have come around to join hands to capture power. But the distance between the proverbial ‘the cup and the lip’ is to be gulfed.

The leadership of both BSP and Akali Dal demonstrated to be ‘upbeat’ and expressed satisfaction on the alliance. BSP Supremo Mayawati termed the alliance as “a new political and social initiative’ while BSP’s senior leader, MP Satish Mishra who negotiated the alliance said, “Today is the new day in Punjab’s 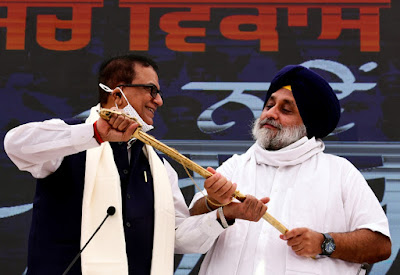 politics; a historic day” President of Akali Dal, Sukhbir Badal said, The relationship which was formed by SAD Patron Parkash Singh Badal and BSP Founder Kanshi Ram 25 years ago has been revived”. Former CM Parkash Singh Badal blessing the alliance said, ‘It was the beginning of a secular, federal and democratic revolution in the state and the country for a total socio-economic and political revamp of polity”. Congress MP, Chaudhary Santokh Singh dubbed the alliance as “opportunistic” Another Congress MP, Ravneet Bittu created a ‘political storm’ by making a controversial and, prima facie, said to be ‘castiest’ remarks on leaving the said to be ‘pious or holy’ seats by the Akalis to the said to be a party of dalits, BSP. BJP appears to be watching the emerging scene carefully before jumping into the fray. Some political pandits feel that BJP might resort to arm twisting of Mayawati, if required, to torpedo the alliance to ‘teach a lesson’ to Akalis for divorcing BJP.

The political analysts and the media have shown considerable interest in the development. The main stream media gave  mixed reactions. The Times of India story done by a knowledgeable hack I.P. Singh titled it as “BSP cadres happy with SAD tie-up, peeved at leaving ‘good’ seats”. The Tribune in an editorial observed the alliance as ‘is an attempt by Akali Dal and Mayawato led BSP to revive their political fortune jointly in the state”. One of the senior most retired IAS officers of dalit community who also remained privy to important decisions of Manyawar Kanshi Ram and his politics, Tilak Sarangal candidly wrote in his timeline of Facebook and said, “The present alliance will also meet the same fate (referring to 1996). It may break even before 2022 election. Even if it continues, BSP is going to be big loser. Of these 20 seats which they have got, only 3-4 seats are winnable. They may lose heavily. SAD will be at advantage. They may regain the lost ground because of after effects of Bargari incident. BSP cadre may vote for SAD, but vice versa may not be true. SAD, may go with BJP after elections, if they will be anywhere near majority.”  The sister of Manyawar Kanshi Ram, has criticized the SAD-BSP alliance and blamed Mayawati for the downfall of the party founder so laboriously by his brother. I spoke to some of the Punjab leaders of the BSP. They were hesitant of coming out openly. One of them, anonymously, said that BSP might win 7-8 seats – three on Doaba (Kartarpur, Phagwara and Nawansehar) and 4-5) elsewhere in Majha and Malwa from General seats where the party will ask its senior ally Akali Dal to select and name candidates who will contest on BSP symbol as BSP may not find winnable candidates in these General seats from its own cadres.

Now it will depend on the performance of both the alliance partners and their ability to successfully transfer their vote shares to the respective candidates. If they succeed in doing so, it will be further confirmed that both parties really believe in an egalitarian society as visualized by the Sikh Gurus and Manyawar Kanshi Ram who once 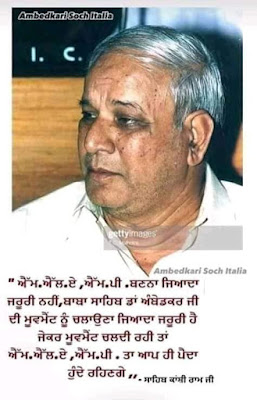 said that Guru Granth Sahib was his election manifesto. And if the SAD-BSP Alliance did not show good results, then dalits will need to sit and contemplate whether they should chalk their own way, independent of all others streams with about 40% dalit population of Punjab. The new entrants and smaller players like Azad Samaj Party o Chandrashekhar Azad (Ravan) and Jeevan Malla’s Bahujan Dravid Party among others would be there upset the applecart. BSP should not be oblivious of this. All said, obviously, it cannot be allowed any further that dalits sit outside the power structures and do the bidding of others whosoever they might be. I conclude:

Posted by ramesh chander at 4:49 AM