A Memorandum Not Delivered

A Memorandum Not Delivered

It is common knowledge that Babasaheb Ambedkar’s famous treatise on the caste system in India, a book named “Annihilation of Caste” was a lecture which he was to deliver in Lahore in 1935 on the invitation of Jaat Paat Torak Mandal. But due to some reservations on the side of the Mandal, the lecture could not be delivered. Babasaheb published it later in form of a book which proved to be a par-excellence analysis of the issue and remained so till date. I have no illusion of my intellect and capacity. But I take the liberty of publishing a Memorandum which was drafted by me on the request and approach by one of my close friends on behalf of my own fraternity in Bootan Mandi, my native place in Jalandhar.  The Memorandum which was intended to be delivered to Mahamahim Rashtrapatiji, President of India through the Deputy Commissioner of Jalandhar District with regard to the Bharat Bandh on April 2 called by the dalit organizations and outfits to protest against the recent rulings of the Hon’ble Supreme Court of India diluting the provisions of the SC & ST (Prevention of Atrocities) Act, 1989 but could not be delivered due to reasons best known to the elite at Guru Ravidass Educational and Charitable Trust and Satguru Ravidass Dham of Bootan Mandi.  My off the cuff and informal interaction with some of the leading lights of both the Trust and the Dham put forward bizarre reasons and arguments with which I was surprised and got somewhat anguished too. The basic argument was that since no one else was submitting such a Memorandum, there was no need for us to do so. The second argument further astonished me. Where was need to give anything in writing to Rashtrapati? Did he not see what was happening with regard to the Bharat Bandh? One of them even remarked, “Rashtrapati is not blind and moreover he is an RSS Chamcha”. I decided to share the draft Memorandum through my blog, as usual with a simple question. Where was the need for the senior leaders of RSS and the Government of the day to issue statements and explanations on the issue of SC & ST Act and the Bandh? Rashtrapatiji, being one of them very well knew their views and intentions and still they chose to make statements. Our self proclaimed and learned elite think that there was no point in issuing any written submission. Why did the dalit outfits raise ruckus on the roads and streets, if they don’t have anything concrete to say and submit in writing?

I leave it at that with one pertinent observation that the Bharat Bandh of April 2 was successful with an overwhelming support. Some points, prima facie, become evident. The day long events and incidents gave way to the pent up feelings and emotions of the 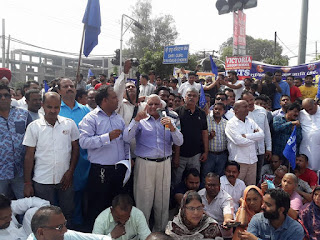 suffering masses i.e. dalits. It was a spontaneous rising with scattered leadership or no leadership at all like the mutiny or rising or the first war of independence in 1857 in the struggle for freedom of our country. Dalits are no more interested in sitting tight and undergoing the sufferings being inflicted on them by the unjust social and economic order. The so called ‘Muhafizs’, in an expression of Sahir Ludhianvi, of Bhartiya polity and society  need to understand this, the sooner the better.

Text of the draft Memorandum which was not delivered

Respected Mahamahim Rashtrapatiji,
We at the Guru Ravidass Educational and Charitable Trust, Bootan Mandi, Jalandhar, in solidarity with the other concerned organizations and outfits, fully and whole heartedly support the Bharat Bandh call to protest against the recent untimely and uncalled judicial out-reach by the Hon’ble Supreme Court to dilute the efficacy of the provisions of the SC & ST (Prevention of Atrocities) Act, 1989. We strongly feel that any dilution of the provisions of the Act will be detrimental to the interests of SCs and STs who have been made to suffer an organized and willful suppression and oppression by the society and the polity for centuries together. Under the provisions of the constitution of India, the Parliament of the country, in its own wisdom and consideration, made appropriate laws to address the sufferings of the under privileged by due process. We don’t understand the need and desirability to change the law of the land by judicial activism as long as the law is not an ultra vires to the constitution. Nevertheless, if Hon’ble Courts are still convinced that some laws are bad in the justice system of the country, the courts may suggest and advise the Executive or the Parliament or both to consider and change the laws with due process under the provisions of the constitution. There is no justification, as far as common people understand, to change the law and dilute its efficacy by judicial dictates. The dalit masses of the country are perturbed and alarmed at these developments which are aimed at putting the cloak back by the vested interests. We should not allow it to happen. The spirit of the constitution of India stands by the suffering humanity. The laws of the land should conform to that spirit to bring about affirmative actions to undo the systematic suppression of the weaker sections of the society. The popular will of the people fully endorse that dalits, the suffering masses, should be made to join the main stream of the society as equal partners and stakeholders in the development of the country.

All said and done, we humbly submit to Mahamahim Rashtrapatiji, the protector and custodian of the constitution of India, the following:
·       All the organs of the government that is the Executive, the Legislature and the Judiciary should endeavor to establish a just social and economic order as stipulated in the constitution.

·       The Executive should immediately move a Writ Petition in the Hon’ble Supreme Court against the recent rulings by the Court to water-down and dilute the provisions of the SC & ST (Prevention of Atrocities) Act. The much talked about Review Petition is not the answer. We feel that the present government has not taken the matter seriously and has not presented the matter in its right perspective. Mahamahim Rashtrapatiji may consider sending a suitable message to the Executive in this regard.

·       In case the Hon’ble Court still feels that its decision and judgment conform to the law and norms of justice, the Parliament may consider strengthening the law by due process to safeguard the interest of the suffering masses. We are of the view that the suffering humanity is no more willing to sit tight and listen to the dictates of their tormentors.

·       We look towards Mahamahim Rashtrapatiji for support in defending our constitutional and human right by all constitutional means as taught and propagated by the father of the Indian constitution and the greatest son of India, Babasaheb B.R. Ambedkar.

Done and submitted at Jalandhar on April 2, 2018 through the Deputy Commissioner of Jalandhar

Posted by ramesh chander at 5:53 PM