Choice between two truths: - The Presidential election is scheduled to be held on July 17, 2017. The two main candidates in the election are – Ram Nath Kovind of the ruling NDA and Meira Kumar of the opposition UPA. Both the candidates, to my mind, fully fit the bill and if elected will do justice to the coveted position of the President of India.  It is unfortunate that the main stream of the society and the media are, consciously or otherwise, giving a 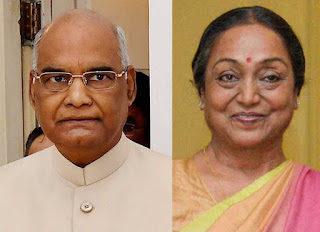 caste colour to the election as both the candidates are dalits. It is obvious that the political outfits on both the sides have named these two dalit worthies for the top constitutional job on considerations of vote bank. But let it be. We are a democratic country and vote banks have a definite role in the system. It is interesting to note that the choice is between the two truths – Ram Nath Kovind and Meira Kumar, both highly qualified and capable to adorn the high office of the President of India.  K.R. Narayanan was said to be the first dalit President of India. Of course he was a dalit but he was one of the best Presidents of India. Gopalkrishna Gandhi who is the UPA candidate for the post of Vice President of India worked as Secretary to President K.R. Narayanan and has recently written, “We need a President like Narayanan” He has narrated a dialogue between Mahatma Gandhi and K.R. Narayanan when Narayanan was just 25 and I quote “He (Narayanan) had just been awarded a Tata scholarship and was going to London. ‘You have simplified for us the choice between truth and untruth’, he asked, ‘but what would you advise when the choice is not between truth and untruth?  And, when in England I am asked about the untouchability issue in India, should I reply as an Indian or a Harijan?’  The election of Ram Nath Kovind and Meira Kumar is a choice between two truths. Whosoever makes it to the high 0ffice of the President of India will have to prove him or herself. Given the electoral realities, it seems that Ram Nath Kovind will occupy the Rashtrapati Bhawan by the last week of July, 2017. I believe, he will fully justify the choice and hold the trust as visualized by Gopalkrishna Gandhi, “A president who can speak bitter truths like that (referring to Narayanan) is the President India needs, be he or she Hindu, Muslim, Christian, Dalit, OBC, Brahmin, political or non-political.” The truth has been sealed in the ballot boxes today.

The Argumentative Indian – Documentary on Amartya Sen:- The news about the Censor Board’s objections to a few words in the documentary film, The Augumentative Indian,  on the Nobel laureate, Amartya Sen, is disturbing in the prevailing general impression that the government and the society at large was getting intolerant to dissent and other points of view. The CBFC required the filmmaker, Suman Ghosh, to beep out or mute words such as Gujarat, Cow, Hindutava view of India and Hindu India used by Amartya Sen in the narration of the documentary.  Suman Ghosh is not ready to agree to the dictates of the CBFC and rightly so. How will it help? In any case, the matter is already in the media. Moreover, Amartya Sen is “one of the greatest minds of our times”, as stated by Suman Ghosh. No one should doubt and challenge this standing of Amartya Sen. It has been reported that Chairman of CBFC, Pahlaj Nihalani has defended their action by saying, “here is the reason why – because we felt that a documentary on an Indian Nobel Laureate referring insensitively to our politics and religion could result in serious breach of peace.” It seems a gross case of stupidity to undermine both Amartya Sen and the Indian people. Are we living in a civilized society under democratic dispensation or some sort of dictatorship?
I wrote this piece yesterday. Meanwhile, Natwar Singh, my inspiration to write ‘Bits and Pieces’ has pleased himself and his readers on the subject in Sundays Tribune. I please myself by quoting Natwar Singh:-
“Several newspapers have made fun of the CBFC. One editorial says, “Exactly what does the ‘Hindutva view of India’ have in common with, ‘bastard, saale and haramzade’”. The headline in another editorial is “Censor Board on Rampage”. A third one says, “By a thousand cuts”. Another editorial’s heading is “Censoring Sen outrageous.”Amartya Sen has taken a philosophical view, “even those who do not have an iota of interest in him will now see the documentary”. Amartya Sen is a man of undisputed learning, character, courage and lively charm.”

Meanwhile before this is posted in my blog, yet another controversy in the name of freedom of expression and danger to peace and harmony has come up – the Congress party objecting to Madhur Bhandarkar’s film ‘Indu Sarkar’ – a film said to be on the emergency imposed by PM Indira Gandhi in 1975. What is the problem? Many films have already been made and many books have been written on the subject. Let it be one more. People of India and the world at large know the role and contribution of Indira Gandhi to the Indian politics and society.

Grin and beer it with cheers:- The July 17, 2017 issue of the Outlook magazine has carried a brief story on Andhra Pradesh government’s decision to promote low alcohol and locally produced beer as it is a healthier option than other forms of liquor. I think this decision makes a lot of sense and other states should understand and follow suit. Good drinking water is not available in most parts of the country and also to the poor masses. It is advisable to urge people to drink low alcohol beer or wine instead of hard drinks. It is difficult to change drinking habits of people. This decision to promote low alcohol drinks will not only save people from undrinkable water but also satisfy their psychological urge to drink. Popularity and availability of non-alcoholic beer and wine in some of the Arab and Islamic countries also ready availability of low alcoholic content beers and wines in Scandinavian countries is a good example in this regard.

Prohibition as a policy has failed not only in India but also in other countries. Prohibition, to my mind, is hypocrisy of human mind. In the 20th century, it failed in Europe, Americas and many countries in the developed world. Spiritual or moralistic convictions of various religions are the root cause of prohibition. But the consumption of alcohol has not come down and it cannot be stopped altogether, it appears. 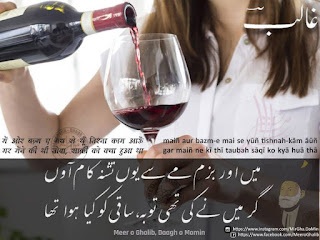 In India, ancient scriptures like the Ramayana, Mahabharata, Puranas and Vedas find mention of alcoholic beverages like Sura. The Ayurvedic texts recognize potency of alcohol for medical purposes. The constitution of India stipulates in its Article 47 under the chapter Directive Principles of State Policy – Duty of the State to raise the level of nutrition and standard of living and to improve public health. It says, inter alia, “The state shall endeavor to bring about prohibition of the consumption except for medical purposes of intoxicating drinks and of drugs which are injurious to health.”  I think consumption of alcohol particularly low degree beers and wines consumed in temperance are not injurious to health. This is what the ancient Ayurvedic and modern medical science say. The
State has to play a role in leaving this unrealistic approach of general prohibition and end this hypocrisy. People shall be advised and educated about the good points of temperance and drinking culture. In India, people tend to drink to satisfy their inner and natural urges but not socially and in the family. They drink stealthily and that too hurriedly. It is not good. The nutritional and medicinal value of alcoholic drinks is lost in the process which leads to many social and health problems. The state governments in India are interested in easy revenue from excise duty and other taxes on alcoholic drinks. They are not interested in social and health considerations. They are also not interested in what the poor masses drink. One can see the hypocrisy and willful exploitation in Punjab. The listed and written retail price of a bottle of beer is something like Rs. 85/- but the retailers are selling it for not less than Rs.150-180/-. The rich who can afford may drink but what about the poor? They are condemned to drink spurious and harmful spirits. I read some years before that Punjab had started producing good quantity of grapes which were more suitable for making wines which would cost less than the cost of a bottle of Coca-cola. What is the problem? Let people drink beer or wine with low degree of alcoholic content and save them from undrinkable water. With this the intention of the Directive Principle of State Policy mentioned above will be taken care of in a more meaningful way.