The Question of Reservation

The question of reservation for SC, ST and OBCs in India is an important issue which tends to remain in the news in one way or the other. The recent Patidar Anamat Andolan of Hardik Patel in Gujarat has brought the issue in focus once again. Many opponents of reservation are likely to come around and argue against reservation. The Jats of Haryana and UP, the Gujjars of Rajasthan, the Marathas of Maharashtra, Brahman World Federation and many more like the VHP, and may be RSS, also will jump onto the anti reservation bandwagon. If I may say so, as an early warning to dalits who are supposed to be the beneficiaries of reservations, that it is the beginning of an end of reservations but with definite repercussions both for the polity and also for the society. The polity, as envisaged and visualized by our founding fathers particularly Dr. B.R. Ambedkar, could not be transformed from political democracy to social and economic democracy. The society could not be reformed by abolishing the brahmanical social order and establishing a casteless society. The two basic conditions of fair social and economic order and availability of equal opportunities in education and business including land holdings could not be met even after 68 years of independence. These conditions were the major considerations for providing reservations to begin with.  The anti reservations lobby demands to abolish caste based reservations and the demand is likely to get shrill in the days to come. The likely scenario, in the wake of these developments, will be worrisome and may be termed as “Grammar of Anarchy” as warned by Dr. Ambedkar. I can see a political turmoil on the one side and endless social strife on the other. God forbid, it may not turn out to be bloody. I personally stand for reservation for SC and STs as originally provided in the constitution. Obviously, these temporary provisions are required to be phased out in due course. We should think and work towards that goal. One basic point which I may make in this regard is that these reservations and concessions to the depressed classes were not given voluntarily by the so called upper castes but were obtained by sheer struggle, led by Babasaheb Ambedkar and many others, in the face of endless and mindless opposition by the vested interests. Mahatma Gandhi’s life was at stake. In the wider national interest, Dr. Ambedkar signed Poona Pact in 1932 providing for reservations to dalits. Later, these provisions were formalized in the constitution of free India. These facts of history cannot be ignored.

It will be in order, therefore, all political parties, all social

organizations, all economic and financial bigwigs should sit and think as to how we can bring about social and economic democracy in the country and also establish a casteless society. It is a must before we address the issue and think of doing away reservation for SC & STs as provided in the constitution.. We may ignore this ground reality at our own peril.

PS: I append here a photo from Facebook postings for information and consideration of my friends who oppose reservations. I will also be grateful if friends who stand for reservation for Sc & STs kindly send me a few points in support of their case for my own education. 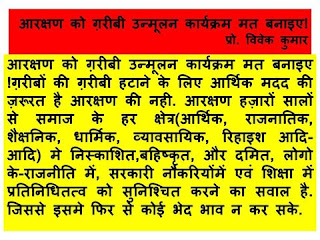 Posted by ramesh chander at 9:23 AM