Buddhism and the World Today

In these days of strife and conflict, relevance of Buddha and Buddhism immediately, and rightly so, comes to mind. The Buddhist thought is as relevant and potent today as it was in the past and will remain so in the future. The world at large has to follow Buddhism, if it is to survive. It is a matter of great satisfaction that the Buddha and Buddhism was re-launched and revived in the recent years in India by Dr. B.R. Ambedkar by himself embracing Buddhism in October, 1956.

The immediate provocation to write this is that one of my 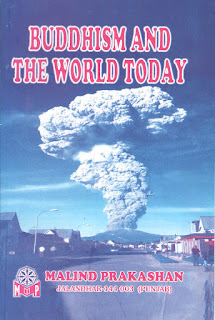 friends and fellow BootaMandian, Harmesh Jassal, gave me a small booklet “Buddhism and the World Today” – a lecture by one of the devout Buddhist scholars , Dr. R.L. Soni,  who chose to migrate to Mandalay, Myanmar in the late 1920s. The lecture was delivered to an audience of army personnel at Maymyo in Myanmar in 1946 on the Veshakha Day, the day of Birth, Enlightenment and Pari-Nirvana of Lord Buddha.  A quote from the biographical sketch of Dr. R.L. Soni written by his worthy daughter in Mandalay, Sujata Soni is enough to say something about Dr. Soni. She further quotes from a weekly which described Dr. Soni in 1956 “Dr. R.L. Soni is a remarkable personality: physician by profession, philosopher by inclination, scientist by training, scholar by interest, writer by hobby, humanitarian by nature, internationalist by contact, leader by aptitude and profound Buddhist teacher through understanding.” One can understand why Dr. R.L. Soni was a friend of Dr. Babasaheb Ambedkar. After their meeting in Mandalay in 1954, Dr. Ambedkar, in his thank you letter to Dr. Soni which has been appended to the booklet, said inter alia, “India needs you and particularly your own Province, the Punjab.” As regards the booklet “Buddhism and the World Today”, it is a philosophical warning to the world at large that only the teachings of Buddhism as enshrined in the Eight Noble Paths, Four Noble Truths and Panchsheel (Five percepts) can save humanity from the holocaust of war and violence. Dr. Soni called Lord Buddha a “Great Spiritual Physician” and said, Lobha, Dosa and Moha (Greed, Hatred and Delusion) are the “three infections of the human mind” and added, “These are the ultimate germs that eat into the vitals of human happiness and create causes which bring about conflicts in personal, social and national relations.”  Dr. Soni raised a question, “Is it possible to disinfect life of these noxious bacteria?”  He answered himself and said ‘Buddhism was simply unique in that direction and will make a substantial contribution towards the cure of the world ills of today by the Love it teaches and the Truth it holds.  In the Introduction, Dr. Soni said that the importance of an individual is supreme in Buddhism. Buddhism is essentially devoted to personal culture through which it endeavors to improve the personal relationship between man and man. The crux of the matter is, to my mind, Buddhism remains a potent force to bring about the atmosphere of general well-being of mankind.

Now let me write a few lines about Harmesh Jassal, the publisher of the booklet “Buddhism and the World Today”. Harmesh is an educated and dedicated Ambedkarite and also a staunch Buddhist. After his retirement from Indian Airlines/Air India a couple of years ago, he engaged himself with his first love ‘Publishing’ under his own banner “Malind Prakashan”.  Harmesh’s experience of working with the Bheem Patrika, one of the oldest weeklies dedicated to Dr. B.R. Ambedkar and Lord Buddha under the able Editorship of the veteran Lahori Ram Balley and the Kirti, a Punjabi weekly devoted to the common causes of the socially and economically weaker sections of the society, came handy to launch Malind Prakashan. Malind Prakashan, over the years has done a good job in bringing out more than ten publications and almost the same number of publications are, as informed by Harmesh Jassal, being processed to present in the months to come. I take this opportunity to wish Harmesh Jassal and Malind Prakshan all success.
Posted by ramesh chander at 2:39 PM