CONGRATULATIONS INDIA - ENJOY THE DANCE OF DEMOCRACY
I have been writing about Anna Hazare's movement against corruption in this blog. In my earlier blogs I also quoted extensively from the father of the Indian constitution Dr. B.R. Ambedkar and also mentioned about the dalits and the Move 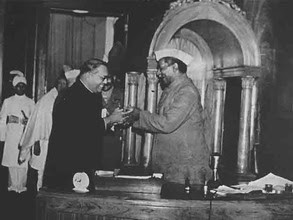 ment. Let me continue on the same note as I feel that the entire media and the intelligentsia have been discussing Anna Hazare's crusade against corruption extensively for the benefit of the public. But, unfortunately, the debate is not necessarily unbiased or objective
First of all, Anna Hazare and his team deserve congratulations for winning a decisive battle in the war against corruption. I had already termed the Movement as a ' Refreshing in put ' in my earlier blog. We are to move ahead as Anna Hazare himself has said that it was a half victory.
It is also a day of victory for the dalits of this country, to my mind. It is a hidden victory. It has become clear again that dalits and Babasaheb Ambedkar will remain a factor in the future of India. Anna Hazare and his team of the civil society did not consider the dalits as part of the public opinion against corruption. They also did not consider the wisdom and contribution of Dr. Ambedkar in establishing the constitutional democracy in India a relevant input in Movement. Arvind Kejriwal did mention once that the Lokpal Bill introduced by the Government in the Parliament was ' anti poor and anti dalit ' but no other member of the Anna Team or Anna Hazare himself mentioned about the dalits and Dr. Ambedkar during 12-13 days of agitation from the Ramlila Maidan. Some media channels invited some of the experts on dalit matters like Chandra Bhan Prasad, Udit Raj, Vivek Kumar, Kanchan Eliah and others to the various talks. They did their best to flag the role and relevence of dalits in the movement against corruption and also that of Dr. Ambedkar in the constitutional set up of the country. The slogans like ' Reservation is corruption ' at the public rallies contributed to the misgivings in the minds of the vast majority of dalits. As the movement climaxed on August 26-27 in the Parliament and other fora, the relevance of dalits and Dr. Ambedkar dawned on the players and stake holders in this important national event. That is the victory I am talking about.
It all began firmly with the statement of Chief Minister of UP Mayawati on August 25-26. She asserted that their party BSP would support the Lokpal Bill or any other legislation under the constitutional provisions of the established procedure and the constitution. The tone and message were clear that she felt that dalits were being sidelined and there was a subtle move to bypass the spirit of the constitution. I followed the debate on the demands of Anna Hazare in the Lok Sabha on August 27 with interest. It was an interesting debate. The statements of the Leader of the House Pranab Mukerjee and that of the Leader of the Opposition were focused on the crux of the matter that is the demands of Anna Hazare and his fast unto death. But the others speeches of the speakers of various political parties pointed to the ground realities. Revti Raman Singh of SP said that the dalits and OBCs and also minorities shall get due representation in the bodies and fora of the Lokpal establishment. Dara Singh Chouhan of BSP reiterated the stand of Maywati on the constitutional norms so laboriously stipulaed by Dr. Ambedkar and made it clear that the dalits were definitely interested stake holders in these matters. Sharad Yadav was forthright in pointing out that Anna Hazare remembered Shivaji but forgot Joytiba Phule and Ambedkar in the run upto the movement against corruption. The RJD leader Lalu Prasad Yadav also referred to Dr. Ambedkar and pleaded for association of dalits and minorities with the process. The young congress leader Scindia also referred to Ambedkar in his spirited speech. The other day Congress General Secretary Rahul Gandhi referring to Anna's movement obliquely mentioned about the dangers ( I think he referred to the issue of Reservation and dalit empowerment) said " Today the proposed law is against corruption. Tomorrow the target may be something less universally heralded. It may attack the plurality of our society and democracy. India's biggest achievement is our democratic system. It is the life force of our nation. " All this clearly brought out the relevance of dalits and Dr. Ambedkar in the years to come.
The poetic assertion ' कुफ्फर टुटा खु 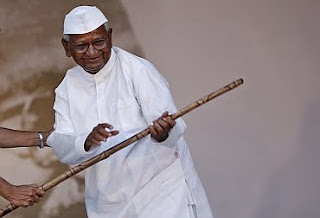 दा खुदा करके ' came alive in the excitement of the morning of August 28 before Anna Hazare called off his fast. Arvind Kejriwal recognised that the dalits were not happy with Anna's movement against corruption. He refuted such impressions and mentioned Dr. Ambedkar and the constitution several times in his speech and said that they were not against the Constitution and added that they respected the Constitution and its architect B R Ambedkar. "We salute B R Ambedkar," Kejriwal said. Anna Hazare's fast was broken in a dramatic way. Two small girls Simran, a dalit and Ikrah, muslim did the honours by offering a glass of juice and honey to the beaming Anna Hazare. The gesture of the Anna Team reached home the obvious message - ' देर आए दरुस्त आए '. How would Anna Hazare mend the tone and tenor of the movement so far. Breaking his inhibitions, Anna said "This movement has created a faith that the country can be rid of corruption and we can go ahead with implementing laws and the Constitution made by Dr B R Ambedkar." The circle was complete. We salute Anna Hazare and support his Movement against corruption with the hope that he would lead a similar public uprising against the ' social corruption of caste and inequality ' from which the dalits of this great country are suffering. I conclude this with a couplet of Dr. Iqbal:

Posted by ramesh chander at 4:43 PM