It is Time to Remind – International Day of Equality

It is Time to Remind – International Day of Equality

Over the years, since June, 2015 when the proposal to declare April 14, birth anniversary of Babasaheb B.R. Ambedkar as International Day of Equality was made to the Government of India, much water has flown in the Yamuna in Delhi and Hudson in New York. It is surprising and not understandable why the Government of India

(MEA and PMO) is sitting tight and not responding to our several submissions in this regard. We have been writing to EAM, PM and other Ministers and stakeholders and reminding them rather religiously but to no avail. We have no other option but to remind the Government with the hope someday that they would wake up and listen to the voice of the masses, we the people of India.

Babasaheb Ambedkar’s name and legacy is a potent force which may not be ignored for long. It has been repeatedly proved not only in India but abroad too. All the political outfits are only too eager to own Ambedkar and cannot afford to do without him. Over the recent 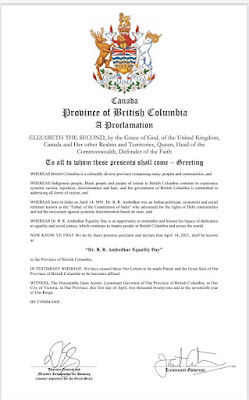 decades, it has been noticed that Ambedkar, one of the greatest sons of India in the contemporary times, is much recognized and felicitated personality with his statues, memorials and other insignia not only in India but throughout the globe. Not that successive Governments of India particularly the current government of PM Narendra Modi have not done their bit in this regard but still Ambedkar deserved much more. And moreover, it will not go in vain but will help in strengthening the democratic edifice, secular credentials and democratic socialism based on the lofty ideals of Equality, Liberty, Justice and Fraternity as enshrined in the letter and spirit of our Constitution by no other but Babasaheb Ambedkar himself as the Chief Architect of the Constitution of India. It is a matter of gratification to note that taking cue from the proposal on International Day of Equality our interlocutors abroad pursued with their local counterparts the idea of honouring Dr. B.R. Ambedkar in one way or the other. Chetna Association of Canada succeeded in convincing the State of British Columbia of Canada and they proclaimed April 14 as ‘Dr. B.R. Ambedkar Day of Equality’ in April, 2021. Earlier the City of Burnaby of Canada had done so in April, 2020. Now in July, 2021 itself, the Gray’s Inn in
London named and opened Ambedkar Room and unveiled his portrait to recognize Babasaheb. You may know that ‘Dr BR Ambedkar is the first person of the Indian origin and the very second jurist in the world to have a room dedicated to him at the Gray’s Inn. The Inn, previously had a room dedicated to Rose Heilbronn, England’s first woman queen counsel and judge’ as reported by the Tribune – Jalandhar Edition of July 22, 2021.

With this background, I thought of reminding our own Indian Government of the subject and again wrote a letter to EAM Dr. S. Jaishankar on July 25, 2021 under intimation to PM Narendra Modi and his concerned Ministers and other important functionaries belonging to the ruling BJP which is appended to this piece. It is the time to act and take a decision to make a demarche by the Government of India to the UN well before the UNGA – 76 scheduled in September, 2021. With an explicit support of India, Foreign Minister of our close friend Maldives Abdullah Shahid will preside over the UNGA – 76 in New York on one hand and on the other India herself will sit at the main Chair at the Horse Shoe Table of the UNSC beginning August, 2021. We are confident that GOI would not let the opportunity pass and take the proposal to the UN immediately to add to its international standing under the soft diplomacy endeavors. It goes without saying that Ambedkar’s name and his legacy would dictate the political course of India in the days and years to come. The proposed International Day of Equality would tend to send a positive message to the Indian masses particularly the followers of Babasaheb and the weaker sections of the society. The ruling outfits, having the mandate to take a decision, would stand to gain by honouring one f the greatest sons of India and an international icon, Dr. B.R. Ambedkar.

Ever since you have taken over as the EAM in May/June, 2019, I have been writing to you about the International Day of Equality, my last letter dated April 1, 2021 (copy enclosed for ready reference) refers. The proposal to declare April 14, birth anniversary of Dr. B.R. Ambedkar, as International Day of Equality was first made in June, 2015 to your predecessor EAM Sushma Swaraj ever since the proposal is resting with the esteemed MEA.

I thought of reminding you on the subject in the run up to the forthcoming UNGA in September, 2021. You would appreciate, Sir, Babasaheb Ambedkar is increasingly getting international recognition. It is surprising that our own government, which has taken many initiatives to honour one ofthe greatest sons of India otherwise, is taking time to consider the proposal and take a decision to make an appropriate demarche to the UN in this regard. I may inform, which you may already be aware, that the State of British Columbia in Canada proclaimed to declare April 14 as Dr. B.R. Ambedkar Day of Equality in April, 2021. Some days ago in July, 2021 itself the Gray’s Inn in London has named and opened Ambedkar Room and unveiled his portrait to recognize Babasaheb. You may know that ‘Dr BR Ambedkar is the first person of the Indian origin and the very second jurist in the world to have a room dedicated to him at the Gray’s Inn. The Inn, previously had a room dedicated to Rose Heilbronn, England’s first woman queen counsel and judge’ as reported by the Tribune of July 22, 2021

I don’t feel any need to say much, Sir, as you very well know and understand how to go about and what to do to get declared April 14 as International day of Equality. There may not be more opportune time when India will occupy the Head Chair at the UNSC and UNGA -76 in September, 2021 will be presided over by Foreign Minister of our friend Maldives, Abdullah Shahid

I am confident that my submissions would find an urgent consideration and a favourable decision is taken to see that the proposal is sent and taken up at the UN appropriately. It would send a very positive political signal within the country and to the international community in under-pinning the ‘Soft Diplomacy of India’ to move towards establishing a just and equitable world order.

Posted by ramesh chander at 8:03 AM