Last week we celebrated or observed the 72nd Republic Day on January 26 both with traditional gaiety on the Rajpath and unfortunate violent happenings at and around our symbol of freedom The Lal Kila (Red Fort) in the wake of the ongoing farmer’s protest against the agricultural laws. The day of self introspection has come if we want to save and preserve our Republic and Independence. Let us do that; the sooner the better.

Frankly, I don’t find anybody at hand to guide us in this regard except the visionary Babasaheb Ambedkar whom I repeatedly quote in such assertions. I don’t have any option. The Lal Kila incidents and the increasing unrest all around is a matter of worry and concern. The emerging situation before it becomes the ‘Bane of Democracy’ should be arrested and I quote Ambedkar in this regard who showed us the way to ward off the lingering danger to our democratic edifice. He said in his last speech in the Constituent Assembly on November 25, 1949 at the time of final enactment and adoption of the constitution, "If we wish to maintain democracy not merely in form, but also in fact, what must we do? 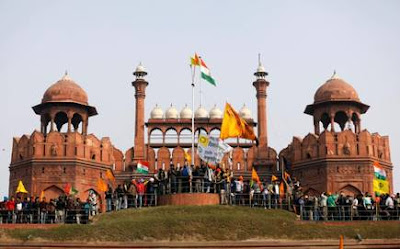 The second thing we must do is to observe the caution which John Stuart Mill has given to all who are interested in the maintenance of democracy, namely, not “to lay their liberties at the feet of even a great man, or to trust him with power which enable him to subvert their institutions”. There is nothing wrong in being grateful to great men who have rendered life-long services to the country. But there are limits to gratefulness. As has been well said by the Irish Patriot Daniel O’Connel, no man can be grateful at the cost of his honour, no woman can be grateful at the cost of her chastity and no nation can be grateful at the cost of its liberty. This caution is far more necessary in the case of India than in the case of any other country. For in India, Bhakti or what may be called the path of devotion or hero-worship, plays a part in its politics unequalled in magnitude by the part it plays in the politics of any other country in the world. Bhakti in religion may be a road to the salvation of the soul. But in politics, Bhakti or hero-worship is a sure road to degradation and to eventual dictatorship.

If we fail to heed to these warnings, we will do so at our own peril 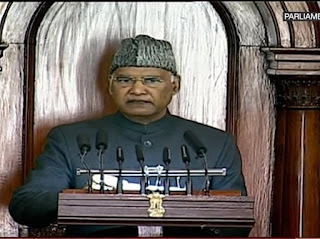 executive powers rest with the Cabinet headed by the Prime Minister popularly elected by the people of India. The third organ of the state, Judiciary is supposed to be free and fair and independent. The necessary ‘checks and balances’ have been created in accordance with the ‘Division of Powers’ clearly stipulated in the constitution. In more than 7 decades, the process of our constitutional and democratic setup has seen many ups and downs. By and large, we remained on track in spite of the fact that in all these years we could not evolve political culture based on ‘ideology and agenda’, unfortunately. Of late, it seems, we are losing the ground and direction in this regard which may prove to be costly and detrimental to our parliamentary democracy. Let me remind you of the assertions made by Ambedkar on our parliamentary democracy to set the thinking in right perspective. He said, “On the 26th of January 1950, India would be a democratic country in the sense that India from that day would have a government of the people, by the people and for the people. The same thought comes to my mind. What would happen to her democratic Constitution? Will she be able to maintain it or will she lose it again? This is the second thought that comes to my mind and makes me as anxious as the first.

This democratic system India lost. Will she lose it a second time? I do not know. But it is quite possible in a country like India – where democracy from its long disuse must be regarded as something quite new – there is danger of democracy giving place to dictatorship. It is quite possible for this new born democracy to retain its form but give place to dictatorship in fact. If there is a landslide, the danger of the second possibility becoming actuality is much greater.”

These assertions of Ambedkar are ‘food for thought’ to save our democracy. An immediate provocation to write about the dwindling spirit of parliamentary democracy came from the oppositions ‘collective boycott of the President’s customary Address to the joint session of the Parliament on January 29, 2021. We all know that President’s Address pertains to the agenda and policies of the government of the day then what is the need to undermine the tradition, convention and spirit of the constitution while professing norms of a parliamentary democracy. It is a willful and avoidable negation of the constitution which is harmful to our basic edifice. Yes, opposition may raise questions and say their part of the story in the pursuing debate on motion of thanks. Nobody can or should stop them. PM Narendra Modi rightly urged the opposition and all MPs to debate issues of national importance in Parliament and said “The first session of this decade is commencing today. This decade is very important for the bright future of India. A golden opportunity…to fulfill the dreams of freedom fighters. There should be discussions and presentation of different views for meaningful results.”

Let us listen from the horse’s mouth. Ambedkar spoke at DAV College Jalandhar on October 28, 1951 on the theme of parliamentary democracy and I quote him for the benefit of my readers. He said, inter alia,” Personally speaking, I am very attached to the Parliamentary system of Government. We must understand what it means and we must preserve it in constitution. What is meant by Parliamentary Government? There is a book on the English Constitution written by Walter Begot; it is indeed a classic treatise. It 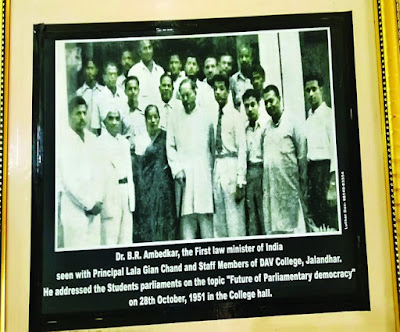 was later expanded by other authorities on constitutional government like Laski and others. He has put the conception of the Parliamentary Government in one sentence. He says Parliamentary Government means government by discussion and not by fisticuffs. You will always find in the British system of Government that they hardly ever resort to fisticuffs when taking any decision. The decision is always taken after discussion. Nobody introduces the element of disturbance in the British parliament. Look at French Politics. Decisions are arrived at more than often by knocking knockout blows. He lamented that we in India are yet to learn this and said, “You will find that this system is hardly adequate to those not born in that system. It is an alien institution to them. We must learn, understand and make it a success.” In the same speech Babasaheb Ambedkar further said there were two important pillars of parliamentary democracy and asserted, “The Parliamentary system of Government is much more than government by discussion. There are two pillars on which the Parliamentary system of Government rests. These are the fulcrums on which the mechanism works. Those two pillars are an opposition and free and fair elections”

We are to think as to where we fit in? Of late, opposition is almost decimated. The ruling outfits are succumbing to ‘majoritarian ‘approach, it seems. The aspect of free and fair elections is completely over-powered by ‘money bags and muscle power’. The Election Commission, supposed to be free and fair and also independent, is increasingly seen as partisan by the political parties and practitioners of politics. We must address these issues; the sooner the better.

The more I read and understand Ambedkar; the more I am convinced of his intellect and vision in this regard. His interventions and speeches in the Constituent Assembly speak loudly and candidly on the parliamentary democracy and related subjects. Here I quote yet another aspect which clearly set the matter of discussion, opposition, differing approaches etc in their right perspective. Hope our MPs and MLAs read and benefit from these while sitting in the august Houses. Ambedkar said, “The task of the Drafting Committee would have been a very difficult one if this Constituent Assembly has been merely a motley crowd, a tessellated pavement without cement, a black stone here and a white stone there is which each member or each group was a law unto itself. There would have been nothing but chaos…

… The proceedings of this Constituent Assembly would have been very dull if all members had yielded to the rule of party discipline. Party discipline, in all its rigidity, would have converted this Assembly into a gathering of yes men.”

.We may see the grace in Ambedkar’s approach in dealings with the differing views of his colleagues in the Constituent Assembly. It requires to be emulated by our leaders in the Parliament and Legislative Assemblies -“That I was not prepared to accept their suggestions does not diminish the value of their suggestions nor lessen the service they have rendered to the Assembly in enlivening its proceedings. I am grateful to them. But for them, I would not have had the opportunity which I got for expounding the principles underlying the Constitution which was more important than the mere mechanical work of passing the Constitution.” He further said, “The Constitution can provide only the organs of State such as the Legislature, the Executive and the Judiciary. The factors on which the working of those organs of the State depends are the people and the political parties they will set up as their instruments to carry out their wishes and their politics.”

I think it is enough and I close here. It is time to think, consider and standup to save our democratic edifice, if wish to make and see India relevant in the years to come.

Posted by ramesh chander at 8:18 AM