Before I get tired – International Day of Equality

Before I get tired – International Day of Equality

I have been writing on the captioned subject – International Day of Equality quite often in my blogs and the last reference to it was made on April 13. I have no intension to burden my readers with this as there are, I agree, many other issues of concern and interest which could be or should be taken up. But still I feel strongly to at least expose the lip service of our politicians who fall on each other to own Ambedkar and his legacy for their selfish agenda of votes in the ongoing exercise of elections in India on one hand and the passive attitude of my well to do so-called well settled professionals and intellectuals professing allegiance to Babasaheb Ambedkar. I frankly but humbly feel that we have not done enough to promote and support the proposal of declaring April 14, birthday of Dr. B.R. Ambedkar, as the International Day of Equality. It is a matter of regret. Let us rectify our thinking and approach and support the idea to demonstrate and register our indebtedness to the great leader, an epitome and symbol of Equality, Liberty and Fraternity. The proposal is resting with the GOI in the Ministry of External Affairs and is getting dumped in the piles of files. Let me expose the disregard and willful silence on the part of the Government and the political class particularly who swear by the name of Ambedkar before I get tired.

I made the proposal to declare Babasaheb Ambedkar’s birthday, April 14, as the International Day of Equality to EAM Sushma Swaraj in June, 2015 in the run up to celebrate 125th birth anniversary of the great leader. It was duly acknowledged by the MEA. I followed it up and kept the PMO in the loop. Forum of SC 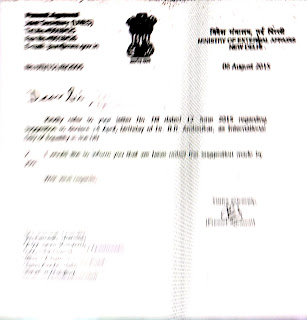 and ST Parliamentarians under the leadership of the then Speaker of Punjab Legislative Assembly Sardar Charanjit Singh Atwal took due note of the proposal and submitted a Memorandum to PM Narendra Modi in November, 2015 in which the proposal on the International Day of Equality, inter alia, was included. GOI decided to celebrate the 125th birth anniversary of Babasaheb at the UN in New York on 13/14 April, 2016. Speaker Charanjit Singh Atwal headed the Indian delegation to the celebrations at the UN. He included the proposal in his speech and urged the GOI to make an official demarche to the UN in this regard. On return from New York, he submitted a report to PM Narendra Modi and briefed him about the proposed International Day of Equality. The Forum of SC and ST Parliamentarians also submitted a Memorandum to Hon’ble Rashrapati Ram Nath Kovind subsequently.  I have been occasionally reminding and following up the issue with EAM Sushma Swaraj and PMO by letters and E-mail messages. With a view to solicit support to the proposal, I wrote to the bigwigs of RSS and BJP including Mohan Bhagwat and Amit Shah and also the Congress leaders Sonia Gandhi and Rahul Gandhi and Convener of AAP Arvind Kejriwal. I have had an opportunity to mention about the proposal to Mohan Bhagwat in my personal meeting with him in Jalandhar. Besides these high-ups and decision makers, I have been, both formally and informally, taking up the matter with the political leadership viz. Minister Thawar Chand Gehlot, MOS Vijay Sampla, MOS Ramdass Athawale, MOS Hardip Puri, MP Udit Raj, MP Chaudhary Santokh Singh, MP P.L. Punia, MP Kumari Selja among others. The response unfortunately was almost negligible. I have also been urging some members of the civil society, particularly of the dalit community, to consider and put their weight behind the proposal. I took the liberty of even informally consulting and taking advice of my diplomatic colleagues including our PR to UN in New York. They have been forthcoming and candid in approaching the subject.  Everybody tended to support the idea but nobody came forward to raise the flag. I write this with a sense of pain as we all owe too much to Babasaheb Ambedkar. A gesture of support to the idea is the very least we can do to repay the debt of gratitude.

I leave it here with the hope that the political leadership and also the intelligentsia will listen and act in these last months of the Government. Otherwise, we would consider and take up the mater appropriately with the incoming Government.  I am not tired as yet.
It is a strange fact of contemporary history which comes to mind that the more people tried to sideline or ignore Ambedkar; the more he found space for himself. The legacy of Ambedkar is so potent that it will remain relevant in the years to come not only in India but also in the world at large. The temples of learning throughout the world are inclined to study Ambedkar and recognize him. The young generations in resurgent Africa have, of late, started realizing that they needed Ambedkar more than Gandhi. Let us understand which way the wind is blowing, before it is too late.

Posted by ramesh chander at 5:38 PM