PMO, in a routine circular E-mail message, asked for ideas and suggestions for the PM’s Independence Day address to the nation on August 15 from the ramparts of Red Fort. I also got the message and just off hand it came to my mind to reiterate my suggestion made to EAM Sushma Swaraj in June, 2015 to make a demarche to the UN to declare April 14, birthday of Dr. B.R. Ambedkar, as the International Day of Equality in the run up to observe and celebrate the 125th Anniversary of the greatest son of India. The proposal was duly acknowledged by the UNES Division of the MEA in August, 2017. I followed up the matter with MEA and also wrote to PM Narendra Modi. PMO also sent an E-mail acknowledgement.  It encouraged me and I started to spread the message to garner support to my proposal. Many individuals and organizations came forward and supported the proposal in the regular media and also social media and some of them wrote to EAM and PMO in this regard. Forum of Scheduled Caste MPs and MLAs under the patronage of the then Speaker of the Punjab Legislature, Charanjit Singh Atwal, submitted a Memorandum to PM Narendra Modi in November, 2015 and supported the proposal. Atwal Sahib included 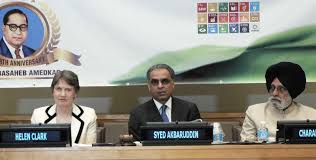 the proposal in his speech at the UN celebrations of 125th Anniversary of Babasaheb Ambedkar at New York in April, 2016. He took up the matter with PM Modi, on his return from New York, in his letter to PM and urged him to officially take up the proposal to declare International Day of Equality with the UN through official channels. Since then, much water has flown in the Hudson Waterfront (Gold Coast) in New York and the Jamuna in Delhi. I am not aware of any formal response from the MEA or PMO in this regard. Again on my own, I made a New Year Resolution to follow up the matter with the concerned leadership and wrote to EAM Sushma Swaraj again in February, 2017. I also urged various outfits to support the proposal wherever I happened to speak and interact. Many of these tended to support. But it is a matter of regret, that most of the followers of Dr. Ambedkar and their organizations are still living in the Jai Bhim and Jai Gurdev Syndrome and as such have no wherewithal to carry forward their agenda. The dalit politicians are either ignorant or have developed myopic vision on the basis of their party affiliations.

All said and done, on an invitation from the PMO, I reiterated my proposal in an E-mail message on August 12, 2017 and requested that it may be included in the PM’s address to the nation on the auspicious occasion of Independence Day on August 15.

Text of my message to PMO:

"Thanks Sir. It is a true democratic practice which PM Narendra Modi has introduced to as the citizens of the country for their inputs for the national agenda. I appreciate this.
Now coming to my humble input, I may add one point. After GOI decision to observe 125th anniversary of Dr. Ambedkar in 2015, I wrote EAM followed by my various demarches to PM and other high ups and suggested to approach the UN to declare April 14, birthday of Dr. Ambedkar, as the International Day of Equality. Subsequently, then Speaker of Punjab Assembly, Charan Singh Atwal also followed up the matter with PM in writing (my last letter to EAM and Atwal Sahib's letter to PM are enclosed for ready reference). The matter is resting at that in spite of my attempts to follow up the matter with MEA and PMO.

To cut the matter short and keep it focused, my humble suggestion is to consider and include this appropriately in the speech of the PM to be delivered from the Red Fort on August 15, our Independence Day. and declare the resolve of the GOI to approach the UN to declare April 14 as the International Day of Equality to honour the greatest son of India Dr. B.R. Ambedkar and to extend support to the millions not only in India but in the world at large to stand up as equals to bring about much needed harmony and sense of brotherhood.

I am confident, Sir, my humble suggestion will find favour. I am open to any consultation or explanation in this regard.

Let us hope somebody in the GOI, particularly EAM Sushma Swaraj and PM Narendra Modi, pay due attention to the proposal and decide to make a suitable approach to the UN to declare April 14 as the International Day of Equality to honour worthy son of India, Dr. B.R. Ambedkar on one hand and to raise the flag of equality in the world at large.

“When we speak of a New India, what do we mean? There are some obvious parameters – like a house for every family, power on demand, better roads and telecom, a modern railway network, rapid and sustained growth. And yet there is more. New India must include that integral humanist component that is in our DNA, and which has defined our country and our civilisation. New India must be a society rushing towards the future, but also a compassionate society,”