Out of the Box Diplomacy – India-Pakistan Relations

On becoming the Minister of External Affairs, Sushma Swaraj,  last year in May, 2014, used the term “Out of the Box” diplomacy which PM Narendra Modi’s government would like to pursue in the conduct of India’s international relations, particularly with its neighbors. Accordingly, both PM Narendra Modi and EAM Sushma Swaraj have been pursuing the foreign policy goals of India over the last one and a half years with a new approach and inputs wherever required and possible on one hand and carrying forward the traditional tenets of its international engagement. Obviously, foreign policy is an on-going process and will continue to meet the challenges, both old and new.

The immediate provocation to write on the “Out of the Box”

diplomacy with regard to Indo-Pak relations is PM Narendra Modi’s surprise visit to Lahore to meet PM Nawaz Sharif on December 25, 2015, ostensibly, to wish PM Nawaz Sharif a happy birthday and join the festivities of the marriage of PM Nawaz Sharif’s granddaughter. It is said that PM Narendra Modi has a penchant for high drama. Why not? He is a leader by his own right whose government enjoys clear majority in the Lok Sabha with overwhelming popular mandate. PM Narendra Modi can afford to undertake, as assessed by Vivek Katju an Indian diplomat and Pakistan expert, who termed it as “innovative diplomacy” with “a quest to make history”. Ever since, PM Modi took over in May, 2014, he has given much needed impetus and visibility to the Indian diplomacy by taking personal initiatives and establishing personal rapport with world leaders to protect and promote Indian interests. Obviously, it requires an “Out of the box” approach leaving aside some of the diplomatic nothings, the so called protocol niceties. PM Narendra Modi’s surprise visit to Lahore on December 25 was a diplomatic master-stroke, keeping in line with his work style and “a quest to make history”. It is simply an academic exercise to discuss as to how it happened? I think, it was thought and planned by PM Modi himself. It is possible he kept NSA Ajit Doval and FS Dr. S. Jaishankar on the loop. He knew in his mind how PM Nawaz sharif will respond to his birthday greetings from Kabul and he would immediately grab the opportunity. It exactly happened the way it was visualized by PM Modi. The special Indian Air force plane was deployed to take care of the security requirements. Befitting gifts were available in the gifts inventory for the granddaughter of Nawaz Sharif. The Indian side has explained how PM Modi telephoned PM Sharif to wish him happy birthday and how, in turn, he invited him to Lahore on his way back from Kabul to have tea with him and join the marriage festivities of his grand-daughter. The Pakistani side explained it with a little twist, perhaps to cater to the local needs that PM Modi telephoned to say happy birthday to PM Sharif and desired to make a brief halt at Lahore on his way back from Kabul to do so. Whatever the case, the purpose was served as mused by PM Narendra Modi to “completely transform India-Pak relations” in the words of an enlightened commentator.

It needs no elaboration that India-Pakistan relations are extremely complex and difficult from day one of their becoming independent nations in August, 1947. Most of the Hindus could not digest the two-nation theory on the basis of which Pakistan came into existence. Some of them are still talking of Akhand Bharat. Pakistan and also Bangladesh are independent and sovereign states and will remain so. My advice to the likes of Ram Madhav of RSS is to study the thought provoking book “Thoughts on Pakistan” written by the finest mind of India Dr. B.R. Ambedkar well before the partition of India. The rest is history. The Kashmir issue is the core issue, as stated by Pakistan, which is the left-over agenda of partition. We may or may not admit it but it is a reality. Despite the “Stand-still Agreement”, Pakistan invaded Kashmir and tried to annex it by force in 1948 itself. Understanding the situation, on Kashmir’s legal accession to India, leaders like Sardar Patel, Shyama Prasad Mukherjee, Govind Ballabh Pant and also Babasaheb Ambedkar advised PM Jawaharlal Nehru to throw out Pakistani invaders by force and kill the issue. But PM Nehru’s thinking was at variance.  He was seeing the issue through the prism of the eyes of Lord Mountbatten and Sheikh Abdullah which, it seems, was a big mistake. Dr. Ambedkar, though he was not involved in matters related to foreign policy when he was the Law Minister in the interim government of PM Nehru, suo-motto gave his views on the Kashmir issue. I quote from an article written by Dr. K. Jamnadas “Kashmir Problem from Ambedkarite Perspective,” Even about Kashmir, the issue on which we are fighting, who is in the right and who is in the wrong. The real issue to my mind, he said, is not who is in the right but what is right and he observed: "... my view has always been that the right solution is to partition Kashmir. Give the Hindu and Buddhist part to India and the Muslim part to Pakistan as we did in the case of India. We are really not concerned with the Muslim part of Kashmir. It is a matter between the Muslims of Kashmir and Pakistan. They may decide the issue, as they like. Or if you like, divide it into three parts; the Cease-fire zone, the Valley and the Jammu-Ladakh Region and have a plebiscite only in the Valley. What I am afraid of is that in the proposed plebiscite, which is to be an overall plebiscite, the Hindus and Buddhists of Kashmir are likely to be dragged into Pakistan against their wishes and we may have to face the same problems as we are facing today in East Bengal."
Dr. Ambedkar was a genius. The solution given by him was pragmatic and was not based on misplaced emotions. Had PM Jawaharlal Nehru listened to him, both the newly independent countries would not have suffered the economic burden of defense of the long border and also the subsequent full blown wars and often repeated border skirmishes resulting in constant hostility between the two neighbors. Even after 68 long years, the solution still lies somewhere close to Dr. Ambedkar’s thinking. PM Indira Gandhi and PM Zulfikar Ali Bhutto, it is said, agreed in 1972 at the time of Simla Agreement to convert the Line of Control (LOC) into international border and settle the core issue of Kashmir. It could not happen. The Nobel Peace Prize eluded them. PM Atal Bihari Vajpayee was interested in making history and he tried with PM Nawaz Sharif and President Pervez Musharraf but failed. PM Manmohan Singh and President Pervez Musharraf picked up the threads and thought of making the LOC and International border between India and Pakistan “irrelevant” and become the contenders for the coveted peace prize. But again it was not to be. Somebody else is destined to make history. Will they be PM Narendra Modi and PM Nawaz Sharif? Only time will tell. 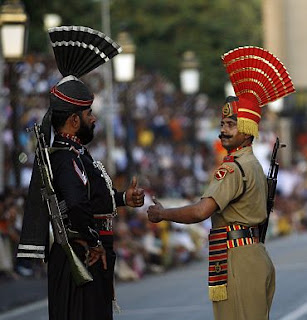 by force. Both India and Pakistan are nuclear powers. The stakes are too high. Nobody will be interested in making it a flash point for the unimaginable holocaust. The leaderships of both India and Pakistan and the people on both the sides and also the international community are not oblivious of these ground realities. The international scenario is changing fast in view of cross border terrorism and regional conflicts. The challenges of development and environment are needed to be addressed to save humanity. The “Out of the Box” solutions and approaches are needed. The festering problem of Kashmir and the emerging situation in Afghanistan needs immediate attention. Both India and Pakistan are required to rise to the occasion to ward of the imminent dangers of allowing the situation to worsen.

Given the background of PM Narendra Modi, he has an image of a 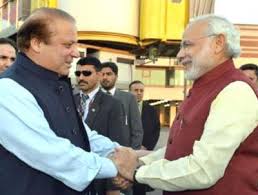 hawk in Pakistan. It becomes all the more difficult for him to do business with Pakistani leadership particularly that of the Pak army and Islamic fundamentalists. On the other hand, it appears that PM Narendra Modi intends to steal the show and make history by adopting an “Out of the Box” approach. He invited PM Nawaz Sharif to his swearing in ceremony in May, 2014 along with his other SAARC counterparts, registering diplomatic deftness on his part. In spite of usual ups and downs in relations with Pakistan, PM Narendra Modi kept the diplomatic routes open. From Ufa to Paris, he did not leave any opportunity to engage Pakistan in constructive dialogue. Addressing the army commanders recently, PM Modi said, setting the agenda, “We are engaging Pakistan to try and turn the corners of history, bringing an end to terrorism, build peaceful relations, advance cooperation and promote stability and prosperity in the region.”  The NSAs of India and Pakistan, Ajit Doval and Nasser Janjua respectively met in Bangkok followed by the visit of EAM Sushma Swaraj to Islamabad in December itself to pave the way for “Comprehensive Bilateral Dialogue” which was stalled due to the vicious bitterness and mistrust existing in the relationship with Pakistan. PM Narendra Modi’s unscheduled visit to Lahore on December 25 on the birthday of PM Nawaz Sharif, PM Atal Bihari Vajpayee, and Quaid-e-Azam Muhammad Ali Jinnah was a diplomatic masterstroke to engage Pakistan in the process of creating history. Let us hope, the process continues and the desired results obtained.

It is not an easy task. Pakistan has to tone-down the rhetoric of “Kashmir is the jugular vein of Pakistan” and shed and shun the policy of exporting terrorism. India being a big country in the region should be more accommodative and magnanimous in dealing with its estranged brother. The government of PM Narendra Modi, with a clear majority in the Lok Sabha, should create political and diplomatic consensus on the issues of conflict and contention within the country. The civil society should be prepared to engage with Pakistan by encouraging people to people contacts. Cultural bonds should be nurtured. The opportunities for the two way trade between the two countries should be explored, identified and exploited. The likes of Ram Madhav, the votary of ‘Akhand Bharat’, should be asked to shut up. The forces of understanding and friendship should be unleashed to create a conducive atmosphere for meaningful dialogue to solve the vexed problems to mutual benefit and advantage.

It is easier said than done. But there is, it seems, a growing feeling of tiredness on both sides. There is a growing realization that force and undiplomatic methods cannot solve the problems and challenges generated by the history. Let us consider and opt for the policy of ‘give and take’ as advised by Dr. B.R. Ambedkar, of course, with necessary adjustments which may be required to address the current situation. Let us wish the leaderships of both India and Pakistan under the stewardship of PM Narendra Modi and PM Nawaz Sharif all the very best in the New Year and help them in making history for the people of India and Pakistan and the world at large.

Happy New Year to the people of India and Pakistan.

Posted by ramesh chander at 3:51 PM