India’s China policy is currently in news owing to the standoff on the LAC between the two historically hostile neighbors. Political, diplomatic, strategic analysts are fully engaged in discussing Sino-India relations from their respective perceptions. The government of India and the opposition parties are up in arms on the reported incursions by the PLA of China at the LAC in Galwan Valley in Ladakh. The situation took a serious and bloody turn on the night of June 15 with heavy losses of life on the Indian side and reportedly on the Chinese side too. On both sides of the LAC, armies are heaving ball to ball confrontation presenting a dangerous scenario. In the given background, I thought of writing on India’s China Policy from an historical perspective which has a definite bearing on the contemporary scene as thought and visualized by one of the sharpest minds of India in the contemporary times, Dr. Bhimrao Ramji Ambedkar, first Law Minister of free India and also the chief architect of the constitution of India.

Though, it is well known, Babasaheb Ambedkar was one of the most educated intellectuals in the Cabinet of Jawaharlal Nehru and Nehru used to introduce Ambedkar as a ‘gem of his cabinet’ yet, it is also a strange fact, Ambedkar was not privy to foreign policy, security policy and even economic development policy of the country in spite of his personal inclination to do such work in the larger interest of the country. Good or bad, it is history. I leave it that.

Nevertheless, Babasaheb Ambedkar was a real public man of standing. How could he remain silent on matters of public and national interest? He had been candid and vocal on important issues including the foreign policy of Jawaharlal Nehru. Ambedkar’s views on India’s relations with Pakistan and China were clear and categorical as he thought in the early years of our freedom and formulation of foreign policy to deal with the outside world particularly our neighbours. Considering the current and emerging status of our relations with Pakistan and China, it may be said that Ambedkar was a visionary leader. His views on Pakistan and China and India’s foreign policy in general were pragmatic and candid.

Let us see what Babasaheb thought of India’s policy towards China in the background of the prevailing tense and hostile standoff with China at Galwan Valley in Ladakh. India was first the country, outside of the communist bloc, to recognize China in 1949. It is well documented what Ambedkar said on India’s recognition of China, “Instead of according recognition to China in 1949, had India accorded this recognition to Tibet, there would have been no Sino-Indian border conflict.” He was equally vocal and candid on the issue. While speaking on China at the Lucknow University as early as 1951, he expressed himself clearly as quoted by Prof. 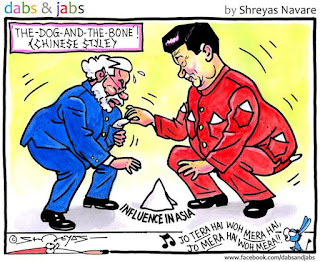 Satish Chandra, HOD of Department of Political Science of the Central University in Haryana in his article,  Ambedkar's Tibet concerns and Chinese threat  “India has failed to develop a strong foreign policy. Tibet has been garrisoned by China; it will have long-term threat to India.” Prof. Satish Chandra further wrote about Dr. Ambedkar’s views on Nehru’s China policy, “He was scornful of Nehruvian foreign policy, especially on China and the erstwhile Soviet Union. He wanted Tibet must remain an independent country. While delivering speech in Kathmandu in 1955, he cautioned the aggressive approach of China to Himalayan states. Almost six decades of Indian foreign policy synchronised itself under the duress of China from a major power to a trivial entity.” Babasaheb Ambedkar was a critique of India’s China policy. He spoke in the Rajya Sabha in 1954 and warned for failing to read the Chinese designs and said “By allowing the Chinese to take possession of Lhasa, the Prime Minister has practically helped them bring their border down to the Indian border… Aggression might well be committed by people who are always in the habit of committing aggression.”  The Panchsheel Agreement was signed with China in 1954. Ambedkar’s take on the subject makes an interesting reading. While speaking in the Rajya Sabha in 1954 on discussion on China, Dr. Ambedkar said, “India accorded recognition to China in 1949. Dr. Ambedkar wished that India should have accorded this recognition to Tibet instead of China and there would be no Sino-Indian border conflict. He further added,  “Our Prime Minister is depending on the Panchsheel which has been adopted by Comrade Mao in which one of the clauses is the No-Aggression Treaty on Tibet. I am indeed surprised that our Hon’ble Prime Minister is taking this `Panchsheel’ seriously. Hon’ble Members of the House, you must be knowing that Panchsheel is one of the significant parts of the Buddha Dharma. If Mao had even an iota of faith in Panchsheel he would have treated the Buddhists in his country in a different manner. Panchsheel has no place in politics. The truth inherent in Panchsheel is that
Morality is forever changing. There is nothing called Morality. You can abide by your promises in accordance with today’s Morality and by the same propriety you may violate your own promise simply because tomorrow’s Morality will have different demands ... in my opinion our Prime Minister will realize the truth in my words when the situation matures further ... I don’t really know what is going to happen. By letting China take control over Lhasa (Tibetan Capital) the Prime Minister has in a way helped the Chinese to bring their armies on the Indian borders. Any victor who annexes Kashmir can directly reach Pathankot, and I know it for sure that he can reach the Prime Minister’s House also.” Dr. B.R. Ambedkar briefly touched these issues of India’s foreign policy in his resignation letter from the cabinet of PM Jawaharlal Nehru in September, 1951 and said that the foreign policy of the country has given him "cause, not merely for dissatisfaction but for actual anxiety and even worry". He opined: "How dangerous it has been to us this policy of doing the impossible and of being too good".

All said and done, much water has flown in the Ganges and the Brahmaputra and the situation has changed drastically ever since in the last seven decades. We are to live with China, a hostile big neighbor and an emerging world power. India needs to have a fresh look on its China policy. I think simply by kneeling down and being goody-goody would not work. We are to stand up and consider our approach to the Tibet issue and the Dalai Lama and also our approach to the Taiwan issue. Our fresh thinking and approach on these issues, of course, entail our relations with the US, Russia and democratic countries in Europe and elsewhere on one side and our relations with the SAARC countries and also our extended neighborhood, Central Asia on the other hand to begin with. The nexus of China and Pakistan must be broken to bring about peace and stability in the region. It is a big challenge posed to the peace loving world by the expansionist China. It goes without saying that internal cohesiveness and political unity to meet the external challenges is the first requisite. I hope our political leadership, both of the ruling dispensation and that of the opposition would understand this – the sooner the better.

Posted by ramesh chander at 6:40 AM