It was June 11-12, 1926 when, under the stewardship of Babu Mangu Ram Mugowalia,  a two day meeting was held at the village Mugowal in Hoshiarpur district of Punjab to discuss the ‘Dasha- Condition’ and ‘Disha – direction’ of the downtrodden, suppressed, depressed and under-privileged of India, now in general parlance, called “Dalits” and chalk out the programme and agenda to 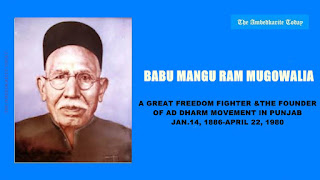 establish, protect and preserve their identity as the ‘Moolniwasi -  native inhabitants of India, separate and distinct from the Hindus. It was an historic meeting which established the Ad-dharam Mandal under the leadership of Babu Mangu Ram Mugowalia, a Ghadari Baba and a social and political activist who addressed and challenged the social and political structures which undermined the fundamental and human rights of Dalits of India. It took no time to turn the Ad-dharam Mandal into a full blown Ad-dharam Movement in north India and beyond. The Ad-dharam Mandal startd asserting it separate identity from the Hindus and others and professed that Dalits were the Moolniwasis i.e. the original inhabitants of India. The dalit masses were, obviously, fed up of the oppressing behavior of the high-caste Hindus and the caste system of Manuwadi social hierarchy. They jumped the bandwagon of the Mandal and started asserting for their rights. Babasaheb Ambedkar was already available on the scene who provided the intellectual muscle to the agenda of the Ad-dharam Mandal on the high-tables in Delhi and London while pursuing his own agenda for the rightful and due space for the depressed classes both in the polity and the society. Both Babasaheb Ambedkar and Babu Mangu Ram were contemporaries and complementary to each other. The Ad-dharam Mandal succeeded in persuading the British rulers to accept and recognize the separate identity of dalits in the census of 1931. As a result, a large number of dalits, in spite of vehement opposition from the caste-Hindus including the Congress Party and Mahatma Gandhi, registered themselves as “Ad-dharmis” in the census register. The Mandal whole-heartedly supported Dr. Ambedkar at the Round Table Conferences in London in 1930-32 which resulted in Communal Award of PM Ramsey MacDonald in 1932, granting separate electorates to dalits amond others. It was a big success for
strengthening of Dalit identity as visualized by Babu Mangu Ram and Babasaheb. But, unfortunately, it was not to be. The machinations of Mahatma Gandhi and other staunch caste-Hindus supported by the Congress Party with their narrow and nefarious agenda defeated and negated the big achievement of Separate  Electorates for Dalits provided in the Communal Award of Ramsey MacDonald by the Poona Pact of 1932 signed between Mahatma Gandhi and Dr. B.R. Ambedkar. Many of the analysts have termed the Poona Pact as a ‘sheer fraud and an act of blackmailing’ perpetrated by the caste Hindus to keep dalits in the Hindu fold to perpetuate their exploitation as per the Manuwadi mindset. The rest is history. I wrote about the Ad-dharm Movement and Babu Mangu Ram in my blog on June 11, 2014 in more detail which may be seen at the link:

The situation underwent a drastic change with the independence and partition of India in 1947 and with the adoption of the constitution in 1950. Babu Mangu Ram Mugowalia tried to revive the movement for the identity of dalits after 1947 as well but could not make much dent in the changed circumstances. I vividly remember that in my younger days in the 1960s, the Shobha Yatra, then called Jaloos, on the eve of Guru Ravidass Jayanti which – as of now also - used to start from Bootan Mandi in Jalandhar, will invariably stop and halt near the then Sant Cinema near Kishanpura Mohalla and a delegation of a few seniors would go and host the flag at the first office of Ad-dharam Mandal after its inception in 1925-26 to register their affiliation and appreciation of the Mandal and Babu Mangu Ram Mugowalia. Let us leave it to the historians to make a good study of the matter and give their appraisal and verdict on the role and contribution of  Ad-dharam Mandal and Babu Mangu Ram Mugowalia in establishing a separate identity of dalits as distinct from the Hindus. The concept of separate identity of dalits has not died down and, it is evident, it would not in the years to come as long as the oppressing regime of caste system and sense of racial superiority is not completely eradicated from the mindset of the society at large. The constitutional stipulations of Equality, Justice and Fraternity have not been completely realized. Babasaheb Ambedkar rightly said that the political democracy would be meaningless if it was not transformed into social and economic democracy. Manyawar Kanshi Ram further asserted dalit identity and made a mark both politically and socially. The followers of Ambedkar, Ramaswamy Periyar, Mangu Ram and Kanshi Ram are carrying the flag of dalit identity as Bahujans and Moolniwasis as their just and democratic right, and rightly so.

Let us remember and recognize, on these days of June 11-12, the sterling role of the Ad-dharam Movement and the dalit icons particularly Babu Mangu Ram Mugowalia in establishing dalit identity to rectify the wrongs done by the caste-ridden social order to their dalit brethren. I close this piece with a quote from an article written by Retired PCS Gian Singh Bal in a souvenir to remember Babu Mangu Ram Mugowalia published in 1985 by C.L. Chumber to set in perspective the role of the great icon of dalits, “Babu M.R. Mugowalia and the early leaders of the Ad-Dharma perceived their first task to be the creation of a new religion. In their initial meetings, even before they developed an organizational structure, they labored over a basic ideological theme upon which they could build a system of religious ideas & symbols. Its central motivation was novel: the idea that untouchables constitute a qaum, a distinct religions community similar to those of Muslims, Hindus, and Sikhs, and that the qaum had existed from time immoral. It was a myth of power addressed to the people without power. It was intended to communicate the sense of strength that Babu M.R. Mugowalia felt belonged to his Caste fellows by right. As he explained, partly stating a fact, partly expressing a hope, "The untouchables have their powers: communal pride (qaumiat), religion (Mazhab), and organization (mazlis), "The hope was that these powers could be fostered and splintered through force of ideology.” (sic)