Thanks for the Support – International Day of Equality


Thanks for the Support – International Day of Equality

As I said in my earlier blogs on the subject, we have entered the next phase of our struggle to get April 14, birth anniversary of Dr. B.R. Ambedkar, declared as the International Day of Equality. The road map, to pursue the proposal was shared on April 14, 2020 which may be accessed in the Link:

The job was undertaken right earnestly with the Minister of External Affairs of India, Dr. S. Jaishankar as per the details available in the Link:

It is a matter of satisfaction that our re-visiting of the issue has been welcomed enthusiastically by not only the followers of Babasaheb Ambedkar all over the world but also by the public at large. I take this opportunity to thank all the stakeholders, particularly Jai Birdi and his associates at Chetna Association of Canada, Santosh Dass and Arun Kumar of FABO of the UK, Chief Editor Prem Chumber of Ambedkar Times Group of California of the USA, inter alia, and many of the outfits in India namely Forum for the Weaker Sections of Punjab, Guru Ravidass Educational and Charitable Trust of Bootan Mandi in Jalandhar among others. I am also encouraged by the spontaneous and whole 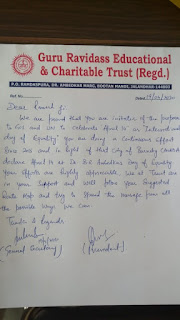 hearted support to these efforts extended by my friends and associates namely, to mention a few, Ambassador Bal Anand, Ambassador Azad Singh Toor, Ambassador Zile Singh, Ambassador Ashok Kumar, Retired IAS, Tilak Raj Sarangal, Retired IRS, Sat Paul Ahir, Retired IRS, Joginder Baghe, Jai Pal Singh of Chandigarh, Retired Director Information, Chaman Lal of Chandigarh, ITS Sushil Sheemar of Shimla, IRS B.K. Virdi of Jalandhar, JNU scholar Uke Kshipra, Retired Senior Banker Baldev Bhardwaj of Jalandhar and many more. Some of the responses are really heartwarming. I am proud of my fellow travelers in the journey. I value their support. I am humbled further in the process. Chetna Association of Canada has very kindly made me the Chairman of the Committee of the Chetna Association to pursue the proposal on International Day of Equality.

Ms. Santosh Dass of FABO of UK wrote in an e-mail:

“Dear Mr Chander ji
Thank you for including me in your recent exchanges with India's MEA and Jai ji on a very important initiative. You can count on our support!
I loved your very powerful words:
"Everybody is falling on each other to own Ambedkar and his legacy in pursuance of their vested agenda but has no mind and time to do something worthwhile to honour the legend of contemporary Times"

“Thank you Santosh ji. You have always been a great champion and supporter of key initiatives. With your support and the Chairmanship of Ambassador Chander ji, I am quite optimistic that we will achieve this goal TOGETHER!

BTW- we have started discussions to have Equality Day also proclaimed in British Columbia and sounds like there is a good chance of it happening in May/April 2021.”

Arun Kumar of FABO of UK wrote in an e-mail:

“Dear Rameshji,
Thanks for sharing this information. We need to make this campaign a movement so that everybody participate in it. We have already written to the Prime Minister of India and endorsed your proposal.  You have already seen my article on this subject published in the Ambedkar Times and The Asian independent. Our Vancouver friends have done this historic work by issuing a proclamation and declaring 14 April a day of Equality for which they deserve appreciation.  It will help in furthering this campaign.”
But this is not good enough. We are to go a long way to realize our goal against all odds. A thought came to my mind which I feel like sharing here. Babasaheb Ambedkar, as I see, did not get anything easily in life. He did not get his due even after he delivered as expected. But recognition did come in spite of the known, sometimes willfully or otherwise, neglect and side-tracking of the greatest son of India by the powers at the helm. The life and legacy of Babasaheb Ambedkar is so potent and relevant that it is increasingly getting recognition and acceptance all over the world with or without any special agenda. It is the beauty of Ambedkar. Though, it seems at this stage that the Government of India is not fully alive to the situation, has not responded to our proposal on International Day of Equality yet my gut feelings tell me that they cannot afford to ignore Ambedkar anymore. The wind of change has started blowing. Babasaheb won ultimately, though late, and he will win again. Let me share with you Allama Iqbal’s poetic expression as to how the fame and name of Dr. Ambedkar is scattered all around:

Let us do our bit and pursue the proposal with the Government of India by writing to EAM Dr. S. Jaishankar and PM Narendra Modi in a suggested timeframe – acceptance of the proposal by the GOI and completion of procedural requirement, make a diplomatic demarche to the UN, take up the matter at the UNGA session in September, 2020, get the proposal endorsed by the UN and ‘WE the people of India’ along with the international community celebrate April 14, birth anniversary of Babasaheb Ambedkar, as International Day of Equality. I am confident that the sagacious and pragmatic leadership of EAM Dr. S. Jaishankar and PM Narendra Modi will not let the opportunity go and encash it on the way of our march to make India a “World Leader”.

Posted by ramesh chander at 5:58 AM