CORONA is not a laughing matter – The lighter side – 7

CORONA is not a laughing matter – The lighter side – 7

One more day of the lockdown has gone. PM Narenda Modi has categorically stated that battle against the pandemic will be “long” and should be prepared for that. PM Modi’s initiatives to remain steadfast and united with high spirits to fight the virus are appreciable but some of us, knowing or otherwise, undermine the purpose by going about in extreme – fireworks, bhangra and dance, rushing to the streets, dhols and so on. We are to learn and back our leadership. There is no other way. The opposition should also stop opposing just for the sake of opposition. I am reminded of an Urdu couplet:-

The second point which I want to make today is – Stop the so called noisy and acrimonious Panel Discussions on the TV channels. Some of the TV channels are not concerned with the health of the nation and the fellow citizens. They are preoccupied with their selfish agenda on the dictates of their bosses within or string pullers outside. The on-going debate on the Tablighi 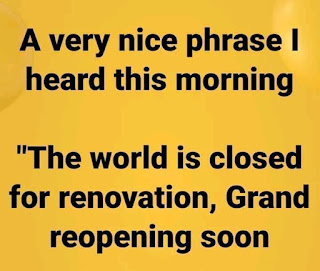 Markaz’s role and behavior in the spread of Corona Virus has generated avoidable heat and communal tensions in the society. The so called ‘free and fair’ journalists are competing with themselves for the loaves of nominations to Rajya Sabha or other coveted positions and in the process making fool of themselves. The outfits in power must stop this dirty game forthwith.

Let us sit at home and enjoy the lighter side of the situation being floated by the positive energy of some of us to lessen and mitigate the resultant boredom and tension of the lockdown. Somebody has admitted that with the home confinement, perhaps, God has granted his wish in all seriousness –
Dil dhundhta hai,fir wahi fursat ke raat din..
Prabhu maine to yuhi gungunaya tha...
Aapne to dil pe le liya..
My son Naresh in Sweden has also commented on the situation with somewhat remorse as he always remained a busy man at the cost of comforts of life:
जो कहते थे मरने तक की फुर्सत नहीं है
वो आज मरने के डर से फुर्सत में बैठे हैं!

The call of PM Narendra Modi to light lamps on April 5 was criticized in some quarters and some worthies even dug out that it was done commemorate BJP’s anniversary by other means. The lighter side cannot take a back seat and a gem came in circulation (courtesy Rajni Tickoo Chopra of Sweden) to celebrate the Lockdown:-

Postscript: - Without Comment - “Violence is not confined to the battlefield. For many women and girls, the threat looms largest where they should be safest. In their own homes. And so I make a new appeal for peace at home — and in homes — around the world,” said the UN Secretary-General as reported in the Tribune of April 7, 2020

Posted by ramesh chander at 9:59 AM