A shrewd and able politician who also remained an important Minister in the BJP/NDA governments passed away today, the August 24. Obviously it is a great loss not only to the BJP but also to the country. It is the second such sad happening in a span of just a few days at a comparatively early age counting the recent demise of SushmaSwaraj. I think politics and public life in India is one of the demanding careers. Our politicians, it seems, are not taking good care of their rest and recreation. Willingly or unwillingly, they 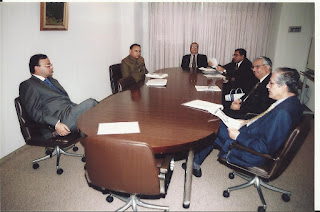 are leading a double life. They are expected not to take leave and go on holidays. They are expected not to drink and dance and unwind themselves. They are expected to be available to the public even at unearthly hours. They should not succumb to the common human weaknesses. These things tend to tell poorly on health and usual family life. We need to think and provide politicians and men in public life their due space in this regard and learn from the lives of their counterparts in the developed world.

I first saw Arun Jaitley, a young student leader or a young professional as a lawyer, campaigning in the elections held in the wake of emergency at a public meeting in R.K Puram in New Delhi. I was impressed by his erudition and enthusiasm with a pleasing personality. Ever since, he remained in the thickness of things in Delhi as a professional legal practitioner and subsequently graduated to hold his sway in India even in public life as a trained and groomed BJP politician. Arun Jaitley enjoyed and wielded a big clout in the corridors of power without claiming to have a mass base which is important in public life. He was an experienced parliamentarian as a member of the RajyaSabha (lost in the Lok Sabha elections from Amritsar in May, 2014, his only effort to enter Lok Sabha), an able administrator and a diligent politician and was rightly considered a trouble shooter in PM Narendra Modi’s government in its first term. Arun Jaitley will leave a big void in the corridors of power in Delhi.

It was my good fortune to meet and interact with him in Tokyo during my diplomatic assignment in Japan. He came to participate in a multilateral conference as the Minister of Commerce along with Minister of Agriculture Chaudhary Ajit Singh sometime in 2003. It was a rewarding experience. I accompanied him to all the bilateral meetings with Japanese leadership and also with his other counterparts from several countries and found him totally prepared and fully articulate with facts and figures to put across his views and inputs. At social occasions, lunches and dinners, Arun Jaitley was totally alive as a compulsive talker with pleasant demeanour and matching dash. I could feel as to how and rightly so he was a darling of the elite not only in India but beyond.

Posted by ramesh chander at 4:21 PM