Dear All,
I wrote an open letter on August 11 on the demolition of Guru Ravidass Mandir at Tughlakabad in Delhi as a curtain raiser of the protests against the said demolition by the followers of Guru Ravidass. First of all, as the situation unfolded itself, it is a matter of gratification to note that the demolition of the mandir of the great guru has been taken seriously by the community and by the wide political and social spectrum around except by some narrow-minded and politically motivated voices who were found lacking in understanding the issue or their political constraints. Even some highly placed people, including a junior Minister at the Center found faults with the management of the Tughlakabad Mandir and others who tended to raise the banner of protest. The leadership of BJP could not come around and stand by the community as the mandir belonged to Guru Ravidass, a nobody in the caste hierarchy and the fact that the decision makers in Delhi to demolish the mandir were no others but their political masters. The upper-caste Hindu community, in spite of the fact that the followers of Guru Ravidass are mostly Hindus, as usual, was found disinterested or even disdainful. The caste system which was an anathema to Guru Ravidass and is unlawful and undesirable under the constitution of India, it seems is still at work.  It is unfortunate. I think the community will certainly take note of this and respond in due course. CM of Punjab Captain Amrinder Singh took due note of the situation and tried to assuage the ruffled feelings of the community and promised to take up the matter with the concerned authorities in Delhi. President of Akali Dal Sukhbir Badal and the Sikh community at large not only condemned the demolition but also showed their willingness to take up the matter with the concerned Minister Hardip Puri and PM Narendra Modi. It has also been reported that SGPC has condemned the demolition of the temple.  Even the Punjab Chapter of the RSS came out with a statement and expressed its displeasure on the said demolition at Tughlakabad.  It would have been good if RSS should have taken a strong and clear stand on the issue and advised the government to desist from the uncalled for and undesirable demolition at Tughlakabad in persuasion of their professed agenda of “Samrasta”. I think, it is still a long way to go in shedding the inherit feeling of social discrimination.

It is a matter of further satisfaction that the successful bandh, as I write at about 2 in the afternoon of August 13, is by and large peaceful and conforms to the democratic norms of protest and disagreement except some violent happenings at Mukerian in Hoshiarpur. I take this opportunity to appreciate and congratulate the protesters - followers of Guru Ravidass and Babasaheb Ambedkar and their supporters from the society at large for their good conduct and praiseworthy demonstration as law-abiding citizens. I feel the Administration in Punjab was also fully geared and alert to ward off any untoward incident. I was told that the concerned law and order authorities took into confidence all the stake holders including the Guru Ravidass Deras to manage and control the situation. I must hasten to add that the government and the concerned authorities should not take these positive signs lightly in taking the decisions and undoing the damage of the said demolition. It may be a proverbial ‘lull before the storm’, if the authorities fail to understand the issue and redress the grievances of the community with regard to the Tughlakabad Mandir of Guru Ravidass. It is a matter of great worry and concern that the mainstream media has totally ignored the issue in spite of the fact that the mandir was located in the capital city of Delhi. Some days ago when a small and nondescript mandir  near Jama Masjid in old Delhi  was allegedly desecrated, all the national TV channels were making loud but uncalled for noises and were falling on each other to demonstrate their concern for the secular character of the country and their soft attitude towards the majority community. This lopsided and discriminatory approach by an important pillar of democracy tends to divide the society. The media must understand this. The earlier the better. The aggrieved sections of the society are in no mood any more to swallow this.

By the evening of today, it is a matter of satisfaction again, the fire fighting to rectify the mistake and damage control has started in Delhi. The Supreme Court has suo motto intervened and said that ‘it was a serious matter and nobody should try to take shelter under the Supreme Court Orders for political convenience’.  The Administration in Delhi – Lt. Governor, DDA, Police Commissioner were taking recourse to justify the ill-conceived and ill-motivated and faultily executed decision in the name of the courts. Only one question in this regard will make their action hollow. The efficiency shown by the Delhi Administration in implementing the so called order of the Supreme Court in destroying the mandir was unprecedented. The order comes in the evening of August 9 and the mandir is demolished in the morning of August 10.  The GOI through the Minister of Urban development passed the bulk to DDA and Lt. Governor. Home Minister is blissfully ignorant of the happenings and has no time to appreciate the sensitivities of the people who stood by them and contributed considerably to come back to power with an added 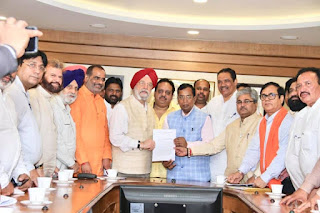 majority. No party – the Congress, the Akalis, the BJP, the BSP and others considered it necessary to consider the matter and listen to the management of the Tughlakabad mandir and stand by them while the parliament was in session. After the noises and the Punjab Bandh of today, some of them have woken from the slumber. A delegation of BJP, Akalis and their allies have met the Ministers of Social Justice and Ministers of Urban Development and urged them to reconsider the unjust action by the Delhi Administration. Let us see what happens. I may add here my immediate apprehension that someone might suggest to allot a piece of land for the purpose somewhere else and end the matter. It will be totally unfair and would amount to high-handedness. The traditional and historical character of the Guru Ravidass Mandir at Tughlakabad should be maintained. The followers of Guru Ravidass should not fall prey to these machinations. There should be no duplicity in dealing with such matters.

I conclude this open letter with the hope that the Delhi Administration under the GOI will take due note of these things and address the issue with all seriousness and sincerity. The followers of Guru Ravidass, on the other hand, should register their protest and demands with cool and pursue the matter with democratic norms as responsible citizens of the country. The incidents of Mukerian should be not repeated to tarnish the image of the great Guru as he said:

With regards and Greetings on the Independence Day and Raksha Bandhan.

Posted by ramesh chander at 5:09 PM