Guru RavidassMandir at Tughlaqabad in Delhi – An Open Letter

Guru RavidassMandir at Tughlaqabad in Delhi – An Open Letter

Guru RavidassMandir at Tughlaqabad in Delhi is in the news. It has been observed that the media, more so the electronic media and the main stream of the society, has tended to ignore or suppress, unfortunately, the news of the Mandir’s demolition by the GOI/DDA. The followers of Guru Ravidass, particularly in Punjab, are up-in-protest and rightly so. The news, actual as well as fake, is 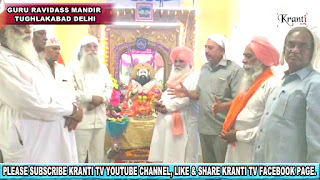 getting viral on social media. With a view to put the things in perspective, I decided to write this open letter to the concerned authorities in Delhi and my fellow followers of Guru Ravidass and the captains of the civil society as the incidents pertaining to the demolition of the Mandir are likely to have far reaching implications to the social and communal fabric of the country and the society at large.

I am a follower of Guru Ravidass currently living in Jalandhar after a long stint as a career diplomat of India. The demolition of Guru Ravidass Mandir at Tughlaqabad in Delhi was said to be carried out by the concerned authorities including the DDA on the advice and directions of the Supreme Court. I will not go into the details of the legal aspect of the case. It seems that the legal battles might have been won by the might of the State and the other vested interests involved in the matter. Obviously, the community stakeholders are not only an unorganised lot but also mostly an uneducated and source less belonging to the weaker sections of the society. The traditional marginalisation and inability of the community to defend themselves and save their dignity and respect and also spiritual identity should not go against them in a democratic and secular setup of the country. As far as the legal aspect, it should be suffice to say that it is an established fact that the land in question was granted by the then ruler Sikander Lodhi to Guru Ravidass as Gurudakshina to pay his respect and regards as a matter of gratitude to the great Guru some five hundred years ago. Guru Ravidass, as the common belief is, even stayed at the place and gave the message of equality, fraternity and casteless society, the very edifice of our current constitution. The DDA or any other authority should not go by the unfounded and lopsided fact and argument that the land is a prime location in the capital of India with considerable financial and economic value. It seems, the Manuwadi mindset, does not accept that the socially and financially weak followers of Guru Ravidass should possess such a prime location in the capital of the country. I will tend to agree with regret that the community could not develop the Mandir as it should be because of their inherit weaknesses. But it should not go against them as the constitutional and social responsibility of the government and the society is to bring about social, economic and all-round empowerment of the weaker sections of the society. In this regard, my humble suggestion to the GOI/DDA is to appoint a high-power committee which should include the spiritual, social and political stakeholders from the community to decide the matter keeping in mind the historical aspects as well as the current realities of ‘affirmative action” to empower and strengthen the community to further strengthen the social fabric of the society. It will supplement and compliment the lofty ideal of ‘Samrasta’ professed by the ruling party BJP and its mentors in the RSS. I hasten to add that mere legal or administrative conveniences are not all the time desirable to address emotional and matters of Astha. The mainstream of the society must keep in mind that the Nirmohi Akhada and other stakeholders, as per the media reports, also do not possess any legal/authenticated documents to claim the Ram Janambhoomi in Ajodhya. It should be enough to address the legal aspect of the issue.

Secondly, it is my ardent appeal to the GOI, through the Ministry of Urban Development, DDA and Lt. Governor of Delhi should immediately address the issue before things get worse. The situation, it seems, is already on the boil particularly in Punjab. Kindly don’t wait, as usual, to react after people take law into their own hands. It is a matter of great regret that the community is rudderless and leaderless. The vested interests and anti-social elements might tend to take advantage of the void. Let us take due note of these ground realities before it is too late. The ruling outfit must understand the sensitivities with about 50 MPs out of 84 of the reserved category in their fold. I have not seen or read any public statement by the ruling party’s Ministers or MPs on the demolition of Guru Ravidass Temple at Tughlaqabad.  Are they sleeping or are they waiting for the people to come out on the street to make their feeble voices heard?

I have purposely not gone into the merits or demerits of the case on the basis of facts and figures as it is not the time to argue the matter but find a solution to address the concerns of the followers of Guru Ravidass as equal partners in the country and society at large.
I would like to take this opportunity to advise my fellow followers of Guru Ravidass that like good citizens of the country and worthy followers of the great Guru and our icon BabasahebAmbedkar not to succumb and resort to unconstitutional and violent methods to express and conduct themselves. Let us approach and appeal the GOI and the civil society to address the issue and stop the demolition of the temple at Tughlaqabad with a sense of accommodation and justice.

With all the best wishes and hope that a saner sense will prevail.