Gandhi Won but We failed the Mahatma

Gandhi Won but We failed the Mahatma

Today, October 2, is the 150th birth anniversary of Mahatma Gandhi, one of the greatest sons of India in contemporary times. Government of India and the indebted nation are celebrating, and rightly so, the occasion in all solemnity and respect. I greet my fellow countrymen and the world at large on this occasion.

I write this piece with a mixed bag of feelings of good and bad. Mahatma Gandhi, like many other great men preceding him, is much revered on one hand and on the other maligned in no less measure for his deeds and thoughts - not so much by the international community but by some sections of his own country that is India. Many people would shy away from telling this ground reality. But, as a novice, Ifelt like saying what I feel with a sense of respect and regard to Mahatma Gandhi.  Mohandas Karamchand 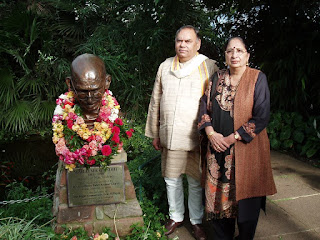 Gandhi did win as a politician,and may be as a nationalist as well, in spearheading the struggle for freedom from the British rule and setting the direction and pace of the politics of free India for many decades which followed. But at the same time, it seems, he failed miserably as Mahatma who professed and followed the dictums of morality, spirituality and humanity. It is a matter of regret to say that we the people of India have failed the Mahatma in Gandhi – be it establishing casteless society, cleanliness (swachata), corruption, environment, non-violence, intolerance, respect for minorities and trusteeship of the rich, inter alia.

Mahatma Gandhi was a man of great understanding and mass approach both for his political goals and also for his social, religious and spiritual agenda. He successfully led the movement for independence and won. Happy ending, India became free on August 15, 1947. He was a staunch Hindu and fought tooth and nail to save Hindu society from disintegration in the wake of the Communal Award of PM Ramsey Macdonald in 1932. Mahatma Gandhi was a wily politician. He made Babasaheb Ambedkar to relent, by hook or by crook, to sign the Poona Pact of 1932 which rejected the Communal award granting separate electorates to the Depressed Classes and the Sikhs. Had the separate electorates prevailed as stipulated in the Communal Award, the political history of India would have been different.  Gandhi won us independence from the British rule. He saved the Hindu society from further division and disintegration. Gandhi became the Father of the nation. His birthday, October 2, is observed as the International Day of Non-violence. He enjoyed unparalleled respect and recognition both at home and beyond. A hardcore Hindu, Nathu Ram Godse removed him from the scene, on account of ideological differences, soon after on January 30, 1948 in a fatal shoot-out in Delhi. It was a sad and bad thing to happen to a person like Mahatma Gandhi and the Indian nation. On the other hand, some analysts feel that providence intervened and saved Mahatma Gandhi from ignominy to see the Mahatma in the persona of Gandhi falling apart and failing in the decades to follow.

Gandhi failed or we Indians failed him as a Mahatma. The country and the society are increasingly becoming non-violent. People are resorting to public lynching and the ruling outfits seem to close their eyes. Corruption has gone to the roots of the system. The cries of Hindu India are getting shrilled by each passing day. The Hindu society is still as cruel and torturous to the fellow dalits as was before. No caste Hindu is still ready to understand and undertake the “spirituality’ lessons of the great Mahatma in cleanliness. Dalits are condemned to do this ‘dirty spirituality’ as before. Casteless society is still a dream even after numerous constitutional provisions to abolish caste based discrimination. Minorities in the country feel threatened. It is a saga of utter failure of the lofty ideals of the Mahatma. It seems that these spiritual experiences of Gandhi proved to be utopian. Take the case of caste and untouchability, Gandhi’s reading differed from that of Ambedkar.  According to Suparna Gooptu, Director of the Gandhian Studies Centre at Kolkata, while Ambedkar preferred rights based approach, Gandhi believed in faith and spirituality. Sometimes, it is felt that Gandhi’s approach to address these issues was half hearted which could not impress or reform the Hindu manuwadi mindset. Dr. Ambedkar in his interview to BBC in 1956 said, “As a politician he (Gandhi) was never a Mahatma”.

The redeeming feature of the scenario, with respect and regard to Mahatma Gandhi on his 150th birth anniversary, is that the current government of PM Narendra Modi has done and is committed to undertake some of the so called spiritual experiences of Mahatma Gandhi for the advantage and benefit of the society such as International Yoga Day, Swach Bharat campaign, Fitness Movement, Plastic Free India among others.

It is a real tribute to the memory of the great leader Mahatma Gandhi.  Let me conclude with a quote from Martin Luther King Jr., “Christ gave us the goals and Mahatma Gandhi the tactics. If humanity is to progress, Gandhi is inescapable. He lived, thought, and acted, inspired by the vision of humanity evolving toward a world of peace and harmony. We may ignore him at our own risk”

Posted by ramesh chander at 5:24 PM