Kashmir Issue – Kashmiri leader Farooq Abdullah is grabbing the headlines these days for his said-to-be provocative and anti-national statements on POK. Farooq Abdullah is of the view that Pakistan is a stakeholder in the Kashmir issue and it should be discussed and settled. He also inserted that POK, under the given circumstances and history of the issue, belonged to Pakistan and India-held J&K belonged to India. Both the claimants, India and Pakistan, did not have the wherewithal to change the status quo even after 70 years of the dispute, he further asserted. He believed 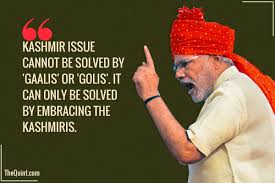 that this may settle the matter and bring peace in the region. Obviously, these provocative statements were criticized widely, particularly by the BJP and its allies. Without going into the history of the Kashmir issue, which is well documented, let us consider and analyse the point of view of Farooq Abdullah dispassionately. No normal and easy solution is possible, it is almost certain. The status quo is difficult to change with force or by military means, given the nuclear status of both India and Pakistan and also direct or indirect involvement and strategic interests of China and other powers. Too much damage and harm has already been inflicted on India and her people. A viable solution has to be found, sooner the better. The time has come, I think, to try, explore and find an “Out of the Box” solution through political and diplomatic means to address the issue. The governments of the day with involvement of civil societies on both the sides should forge national consensus on the issue and move ahead with an attitude of “Give and Take”. Otherwise, there will be no peace in the region and people will continue to suffer. Some hard but realistic decisions need to taken by the leaderships.

Democratic Hypocrisy – We observed the Constitution Day on November 26, the day we gave ourselves the constitution in 1949. It was a low key affair as the government did not pay much attention. It was noted and I term it as democratic hypocrisy by the vested outfits and by the so called extra-nationalists. I have two immediate instances on hand to prove my assertion. One, the needless controversy on the film Padmavati spearheaded by the Rajputs and some narrow minded Aasthawadis. The film has not been cleared and certified by the competent authority that is CBFC. Not only some street-smart leaders but some people occupying positions of responsibility are making a hue and cry without caring for the law of the land and also established norms of democratic behavior. They are threatening the producer, the actors and supporters of democratic rights, such as freedom of expression, as stipulated in the constitution.  Unfortunately, the governments are 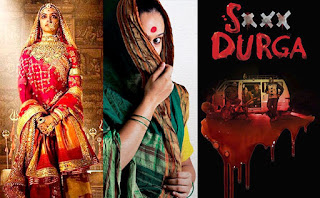 seen as silent spectators. The leaders of Bhim Sena, an outfit of dalits having no social and economic clout, are languishing in jails and the leaders of Karni Sena and their associates are calling the shots from the roof tops. Is it not a democratic hypocrisy? The second is rather more bizarre. Whether Rahul Gandhi is a Hindu or something else? The crony media is hosting debates on the issue. Both the BJP and the Congress are jumping on each other on the recent visit of Rahul Gandhi to the Somnath Temple which has created a controversy on the religion of Rahul Gandhi. Non-Hindu visitors are required to register their religion in the register of the temple as required by the temple authorities? Common people are not interested in the religion of Rahul Gandhi. Yes, the politicians are interested. Are we secular as enshrined in the constitution? Nobody has raised any objection to the discriminatory and communal practice of the Somnath Temple. Is it not a democratic hypocrisy on the part of Rahul Gandhi who did not set the things in their right perspective once and for all?  And on the part of his opponents who raised uncalled for controversy by flagging the religion of Rahul Gandhi in so-called secular India? Are we heading towards “Grammar of Anarchy” as warned by Babaseheb Ambedkar?

Adampur Airport to be named after Guru Ravidass – The Punjab Legislative Assembly has done well by passing a Resolution to name the Adampur airport after the name of Guru Ravidass, a great Guru who stood against the torturous caste system and propagated the principles of liberty, equality and fraternity which later became the core values of the constitution of India.  I fully support and endorse the decision of the Punjab government which has already been communicated to the Ministry of Civil Aviation in Delhi. I am confident that the central government of PM Narendra Modi will accept the recommendations of the Punjab 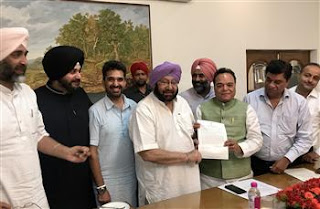 Legislative Assembly and also the wishes of the millions of followers of the great Guru who live in the Doaba region and beyond not only in India but abroad also. Naming the airport after Guru Ravidass will go a long way in providing impetus to affirmative actions of the government and the society at large to empower the weaker sections of society by giving them psychological and moral support on one hand and will also be considered a befitting tribute to the social and spiritual icon Guru Ravidass.
Posted by ramesh chander at 3:54 PM