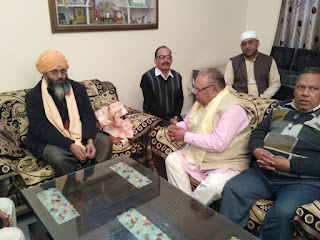 social spiritual personality of the Doaba region. He got initiated and trained under the wings of Sant Garib Dass and Sant Ramanand and acquired and earned good recognition in the aftermath of Sant Ramanand’s assassination in Vienna (Austria) in a mindless shootout by some Sikh fundamentalists in May, 2009. He earned and attained further prominence in the following years as the chief spokesperson of the Dera and Chief Aide of the Dera Chief Sant Niranjan Dass. It is a common knowledge that Sant Surinder Dass was main adviser and executor of the Dera Sachkhand Balan in the run up to the pronouncement and propagation of Ravidassia Dharam in 2010-11. He is said to be one of the major contributors to the compilation and making of the Amrit Bani, the said to be holy book (Religious Granth) of the Ravidassia Dharam. But due to reasons not available in the public domain, Sant Surinder Dass Bawa fell from grace and was made to part ways with the Dera in the following years. Sant Surinder Dass Bawa now runs his own Dera in a village in the outskirts of Jalandhar. He resisted the unpleasant fallout but could not gain the confidence of Sant Niranjan Dass and his coterie. Though we knew each other somewhat earlier as well, in this meeting we could interact a bit more seriously. I enquired about the main thrust of his mission these days. He said of course it was to enlighten, unite and empower the weaker sections of the society as visualized by Guru Ravidass and Babasaheb Ambedkar. He said he was fully engaged, both in India and abroad, in spreading and acceptance of Ravidassia Dharam and the message of Amrit Bani for the good of the down trodden people. The accompanying Ragi Jatha of Bangar Brothers later while singing gave the audience the fore-taste of their mission – their unbroken allegiance to the Dera Sachkhand Balan of yore, Ravidassia Dharam and Amrit Bani as the new identity of dalits, congruity of the philosophy and mission of Guru Ravidas and Dr. B.R. Ambedkar etc. Currently the underlined theme of ‘Chamar Pride’ was a visible item on their agenda. Sant Surinder Dass started his discourse, after the singing of Banger Brothers on the lines of the above mentioned trend setters. I had to leave midway due to some other engagement and could not listen to him. Later my brother Paramjit told me that Sant Bawaji spoke about his untiring efforts to enlighten the community and carry forward the caravan of Guru Ravidass and Babasaheb Ambedkar. He spoke very high of Prof. Balbir Chander and his alma mater, Doaba College in shaping his personality. I respect Sant Surinder Bawa as a well meaning Sant who has dedicated himself totally to the causes of the community. But I have my doubts and reservations on the need and desirability of the Ravidassia Dharam, the authenticity of the Amrit Bani as a holy granth, limited agenda of chamar pride, confining the total thrust of the agenda of the community to Dera Sachkhand Balan. I think, these things lead to disunity and generate animosity which is the anti thesis of the mission and philosophy of both Guru Ravidass and Dr. B.R. Ambedkar.

MLA Chaudhary Surinder Singh: - Though we nodded at each other on a couple of public occasions earlier as well, yet I had a chance encounter with MLA Chaudhary Surinder Singh at the marriage of my nephew (Bhanja) Kamaljit yesterday, December 3, 2017. I introduced myself and exchanged usual courtesies and niceties. Chaudhary Sahib was harmoniously responsive. I introduced my brothers Krishan Lal and Paramjit and Chaudhary instantly responded that they were no strangers and he knew them already. He came on the invitation of the girl’s side. I informed him 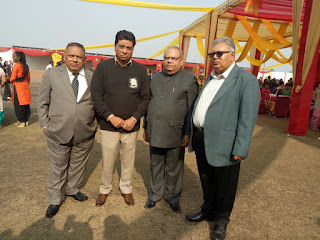 that it was the marriage of my Bhanja. He was happy to know and congratulated me and my brothers. Saying that since there were many more people waiting in the wings to meet him and say hello, I will not like to engage him further and wished to meet him some other time. He humbled me by saying that don’t worry on that count and added that he was pleased to meet me as an important person of our community. I found Chaudhary Surinder Singh a well groomed and cultured personality. His grounding and upbringing in an important dalit family of Punjab, Master Gurbanta Singh, who made a good and positive contribution to the polity and society was clearly demonstrated in a few minutes of our interaction. Surinder Singh is the grandson of Master Gurbanta Singh, a Congress leader who remained a Minister in various governments in Punjab. Surinder Singh is the son of Chaudhary Jagjit Singh who stepped into the big shoes of Master Gurbanta Singh and added many feathers to the family’s turban and handed over the baton to his younger brother MP Chaudhary Santokh Singh. Chaudhary Surinder Singh is a first time MLA from his family’s bastion, Kartarpur Assembly segment. Sometimes it may happen that one carries a false image of someone just on the basis of misinformation or disinformation.  I must write that it was so with me in the case of Chaudhary Surinder Singh. I was told that he was an alcoholic and was not a serious politician. It was wrong. My brief encounter with the scion of Master Gurbanta Singh’s family changed my impressions of Chaudhary Surinder Singh completely. I close this with hearty compliments and all the best wishes to the upcoming leader of the community. It is rightly said:

The significance of December 6:- I was to post this blog on December 6, death anniversary (Mahaprinirvan Diwas in 1956) of Babasaheb Ambedkar and the date of demolition of the Babri Masjid in 1992 on December 6 but could not do so because of technical reasons. The Hindustan Times of November 4, 2017 carried a well articulated article by Shashi Shekhar, Editor -in- Chief of the paper under the heading ‘The significance of 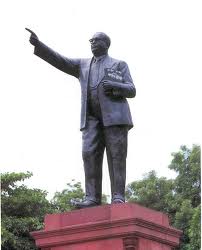 December 6’. The Supreme Court also started the hearing of the Babri Masjid case on December 5, on the eve of the 25th year of the demolition.  Shashi Shekhar has raised a valid question in his article.  He argues, “The date has a special place in the pages of Indian history. In 1992, the Babri Masjid was demolished on this date and in 1956, Bhimrao Ambedkar breathed his last in Nagpur (There seems some inadvertent mistake. Actually it was in Delhi) on the same day. Why I am connecting Ambedkar with Ayodhya, you may ask in surprise. From the outside, these two appear unrelated but the threads of the Indian survival instincts connect the two.” He added, “Don’t be surprised, if within the next two years, you see the temple and the mosque being built at the same time. If that happens, as Indians, we can again proudly declare that our model of coexistence is timeless, eternal, and indestructible. If Ambedkar’s life struggle and teachings drive home the message of social harmony, why can’t the city of Ayodhya become a symbol of our coexistence?” Shashi Shekhar has given us ‘food for thought’ underlining the significance of December 6 in the larger national interest to ward of the lingering dangers to the social and constitutional fabric of India.

Posted by ramesh chander at 6:44 PM