Greetings on the Constitution Day

Greetings on the Constitution Day

Today, November 26, is the Constitution Day, the third, since its inception in November, 2015, as one of the events to commemorate the 125th birth anniversary of Babasaheb B.R. Ambedkar, father of the Indian constitution. The constitution of India was finally adopted, enacted and given to the people of India by the 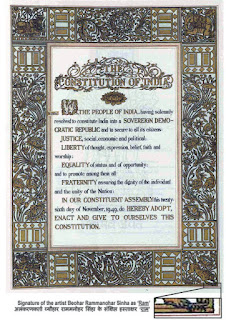 Constituent Assembly on November 26, 1949 which came into effect on January 26, 1950 which we observe as the Republic Day. The day was earlier commemorated as National Law Day, after a resolution by the Supreme Court Bar Association, a lawyers’ body, in 1979. Some of the interesting facts of the making of India’s constitution are:

The Indian government of the day should ensure that the Constitution Day is observed and commemorated with all seriousness and solemnity as an important day in the calendar of events. It was, to begin with, that the nodal Ministry for the purpose will be Ministry of Social Justice and Empowerment. It was perhaps correct as the event was being observed as a tribute to Dr. B.R. Ambedkar during the 125th birth anniversary of the great leader. I think now the nodal Ministry for the Constitution Day should be changed either to Ministry of Law and Justice or to the Ministry of Parliamentary Affairs or the Parliament of India in the joint care of Vice President of India, as Chairman of the Rajya Sabha and Speaker of the Lok Sabha. The Constitution Day should not be left and considered as a vote bank stance because of Dr. Ambedkar, who no doubt played a seminal role in the making of the constitution, but should be commemorated as a day concerning the whole country. It must be underlined that today India is India only because of its dynamic and functional constitution which we gave to ourselves on November 26, 1949. It should be celebrated and observed without fail not only in the parliament of India and the state legislatures and municipalities but also by all the universities, colleges and schools appropriately. The idea is to instill a sense of adopting and adhering to constitutional means to address and solve all matters of concern and interest by the people of India as visualized by our fore-fathers and makers of our constitution. It will help to ward of the dangers of “Grammar of Anarchy” as warned by Dr. B.R. Ambedkar in his last speech in the Constituent Assembly before the constitution was finally passed on November 26, 1949.

When I say that India is India because of the constitution of India, I mean it. India is the biggest functional democracy of the world. Change of guard takes place smoothly in the system of adult franchise on the basis of ‘one vote one value’. The often raised question “Who after Nehru?” was fully addressed under the constitution. One of the strongest PMs Indira Gandhi was unseated by verdict of a judicial court. Resenting and protesting the imposition of emergency, people in a popular vote defeated PM Indira Gandhi and brought in new dispensation of PM Morarji Desai. PMs Indira Gandhi and Rajiv Gandhi were removed from the scene in senseless violence. Indian polity stood its ground and managed the crisis under the constitution. These are not small achievements and could become possible only because our constitution is fully functional and aptly competent to meet the challenges. We should be proud of this.

After 67 years of smooth functioning of our constitution since January 26, 1950, we need to take a fresh look at the current situation. We need to make an objective assessment with regard to the core values and fundamental structures of the constitution. The lofty ideals of democracy, secularism socialism under the dictum of ‘Liberty, Equality and Fraternity” as enshrined in the preamble of the constitution need to be protected and ensured. It is all the more important in the visibly growing tendencies of narrow nationalism and intolerance. The vision of Dr. B.R. Ambedkar to transform political democracy into a social and economic democracy is yet to see the light of the day. We have come a long way in the development and progress of our country and have perhaps arrived but still we are to go a long way to reach. For this, we need to learn to follow and safeguard our constitution as PM Narendra Modi said in November, 2015 “Let us always uphold the ideals & values of our Constitution and create an India that would make our founding fathers very proud.” He further said, “No mention of our Constitution is complete without remembering the stellar contribution of Dr Babasaheb Ambedkar. I salute him.”

Greetings on the Constitution Day to my fellow countrymen.

Posted by ramesh chander at 8:29 AM