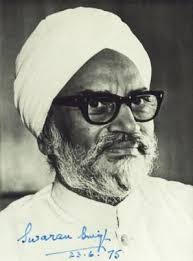 personality and smartly dressed in white khadi, many a times at my native place Bootan Mandi where he used to stop at Seth Khushi Ram’s, a Congress leader, place on his way to his native village Shankar or on tour of his Jalandhar parliamentary constituency. I was impressed by Sardar Sahib’s personality. After joining the MEA, I met him briefly in the Parliament House sometime in the later months of 1970 along with Master Sadhu Ram who was the MP from Phillour. I often saw him coming to his office in the South Block where my office was also located.

I was attached to the Interpreters Cell of the MEA from 1970 to 1973. Interpreters often get the opportunities to work with the top leadership during the course of their duties as Interpreter. Some interesting encounters were often discussed in the Cell. I would like to narrate some such anecdotes relating to Sardar Swaran Singh. One of the Arabic Interpreters and Persian Interpreters narrated interesting anecdotes:-

Protocol Conscious EAM – Sometimes in 1971, Sardar Swaran Singh was on an official visit to one of the Arab countries. He was to call on his counterpart after lunch. He went to his room in the hotel for a siesta telling his aides that he would come down to the lobby five minutes before the scheduled call. But Sardarji did not turn up. They waited for another five minutes. There was no sign of the Minister. In panic the Interpreter went to the EAM’s room and belled. Sardarji opened the door quickly in a huff saying that he was sorry, he fell asleep. He picked up his untied turban (he was not in the habit of using already made turbans) and rushed out. He tied the turban while sitting in the car by using the car mirror. On arrival, he apologized to his counterpart and narrated the entire laps in a childlike simplicity. There was a big laugh. The second such incident was narrated by the Persian Interpreter. Mohammed Daoud, Special Envoy of Afghanistan Head of State King Zahir Shah, was in Delhi, sometime in the early 1970s. He was slated to call on EAM Sardar Swaran Singh in his South Block office. The Interpreter and the Protocol Liasion Officer were to bring the Afghan Envoy to the call from his Hotel. At the eleventh hour Mohammed Daoud refused to move stating that the Indian Minister should call on him as he was senior to him as the Presidential Envoy. What to do? These officers were dumb founded. The matter was reported to the Chief of Protocol. His intervention also could not resolve this protocol intricacy. The Interpreter was sent to EAM’s office to brief him appropriately on the protocol stance of the Afghani guest. Sardarji calmly listened and got up with a big laugh and said let us go. He was fully aware of the sensitivities of such trivial matters.

Cool-headed Sardar:- Sardar Swaran Singh was a cool- headed and soft spoken person with a demeanor of a seasoned diplomat. He was apt at maintaining his cool in the face of extreme provocations by his opposite side. He was often fielded to hold the fort where it was expected or desired that nothing concrete would come out of the talks and negotiations. He would carry on endlessly in the garb of seriousness knowing full- well that it was a sheer waste of time. After one such negotiations, one of his opposite numbers remarked that the Hon’ble Minister must be carrying a slab of ice underneath his turban. On reporting the matter to him, Sardarji had a hearty laugh and said that he was deliberately creating that ‘Bhambalbhussa” (bamboozlement).

In April, 1974, I joined the PMO, the then PM’s Secretariat, as Protocol and Hospitality Assistant and worked there till October, 1977. In that capacity, I had many more opportunities to see Sardar Swaran Singh in the meeting rooms of the South Block and also in the corridors of power in the PMO and the MEA as a humble functionary.

Seasoned Diplomat: I saw Sardarji in action for the first time in April, 1974 in the protracted meetings and negotiations at the Tripartite meeting of FMs of India, Bangladesh and Pakistan to address and settle the issue of repatriation of POWs and civilian internees. Sardar Swaran Singh, Aziz Ahmed and Kamal Hossain headed delegations of India, Pakistan and Bangladesh respectively. I was impressed by the statement of Sardarji at the opening plenary session and was privileged to be present in the conference room of 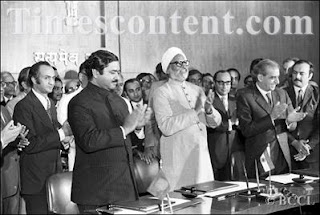 the PMO. One of the formulations of his statement still lingers in my mind when he said in a calm and cool manner, “let us forget the hostilities and confrontations of the past as a bad dream.” Our job was to look after the hospitality that is requirement of tea, coffee, snacks etc.  during the meetings. On the final day at the concluding plenary session in the evening when the protocol and agreement was to signed, I was standing outside the conference room along with my boss Vimla Sindhi, commonly called Behanji. The three FMs came out from the office of PM Indira Gandhi after an official call, situated on the other corner of the corridor, and walked towards the conference room. Seeing Behanji, whom Sardar Swaran Singh knew from her duties at the Teenmurti House in the staff of PM Jawaharlal Nehru, enquired in lighter vein “Han to Vimlaji, ab kya seva karogi? Humne bahut kaam kiya hai. Koi badiya cheez lana.” Vimlaji responded instantly and said, “Yes sir, Aaj bahut garmi bhi hai. Hastakshar hone ke baad, Faluda Kulfi serve kiya jayega.” Sardar Saheb smiled and muttered, “Han yeh theek rahega.” I learnt how Sardar Swaran Singh mastered the art of lowering the diplomatic temperature with his earthy wit.

Political Sagacity: Here is one more anecdote which may be of interest to see another facet of Sardar Swaran Singh’s personality. It is recorded fact that Sardar Saheb was not too happy with the imposition of emergency. His portfolio of MEA was changed. After a cabinet meeting, one day, he came out of the conference room along with some other Ministers. I was standing near the lift in front of the conference room. One of the Ministers asked Sardar Sahib the reason and logic for the change. Sardar Sahib responded curtly, but with his usual smile, and said, “She wanted young blood” in the MEA, probably referring to Y.B. Chavan who replaced him in the MEA. I liked Sardar Swaran Singh as a pleasing and amicable personality.