I wrote on India - Stockholm economic and commercial co-operation and the added opportunities provided by the new liberalized policies of the new Government in India. Let me add to the same theme a small incident as oral history.

I was the First Secretary of the Indian Embassy when PM Narsimha Rao took over in 1991 with Manmohan Singh as the Finance Minister (later PM). The new Government ushered India into liberalized and restructured economic policies to integrate India to the world economy. It was a big event not only for India internally but also for its international partners through out the world. Since my charge in the Embassy was to work on the economic and commercial desk, it was a challenge for me to sell India´s new economic policies to the Swedish partners and invite them to join hands with India. Swedish Trade Council arranged for me a luncheon meeting with the India Interest Group in the India - Sweden Joint Business Council. It was a good meeting in which about twenty business representatives participated. Given my constraints, particularly in view of the evolving situation back home, I spoke as a layman and made a brief statement on the new policies and the political will and agenda of the new Government. I also underlined that India has reached this phase through the process of slow evolution and not as a drastic and disturbing revolution. There were some questions by the Swedish participants about the difficulties faced by them in doing business with India. It was a good interaction. There was a question which had some bearing on the political system and stability and also the policies. The question was a on the minority character of the Government that what would happen to the new liberalized policies if the Government was changed and some other political party came to power. It was a difficult question for me. I responded India was a democratic country working under a constitutional arrangement. Governments might come and go and added that, to my mind, the new agenda of liberalized and restructured policies and reforms, would remain as by now the policies had become a national need for development and progress of the country. I further said that any in-coming Government would not be interested in changing the course, to my considered opinion. There may be some diversions and regulation on the speed but the destination will remain. Most of the participants said that they would watch and see with fingers crossed. My heart and mind were reflecting the situation of anxiety but hope prevailing back home in India. 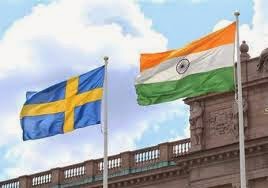 In the summer of 1992, the meeting of the India - Sweden Joint Commission onEconomic Cooperation was held in Stockholm. The Indian delegation was led by the then Minister of Industry P.J. Kurian (now Deputy Chairman of Rajya Sabha). Simultaneously, meeting of the India - Sweden Joint Business Council was also held. The climax of the story comes now. In the opening plenary session of the JBC, in the presence of Minister P.J. Kurian and his Swedish counterpart, the Swedish Co-Chairman of the JBC welcoming and congratulating the Indian side said that they were fully convinced and impressed by the reform process of India. He said, pointing towards me sitting in the first row of the audience, that here was the man, First Secretary Ramesh Chander of the Indian Embassy who came and assured us last year of the firm resolve of India to liberalize and reform. He added that we had doubts but India had proved otherwise and said that Ramesh Chander was correct and they were happy.

I was elated that I could contribute my small bit to the process of development and also to the India-Sweden relations. India is again, in spite of good progress and development registered so far, standing on the cross road like it was in 1991. The new Government has promised ´Ache Din´ (better days). The Indian masses and the world at large are watching us.

Posted by ramesh chander at 9:31 AM