Today January 30 is the election day in Punjab for the Punjab Legislative Assembly. It is just a co-incidence that India observes January 30 as the Martyres Day, the death anniversary of Mahatma Gandhi. My son Rupesh was also born on this day in 1978 in Beijing ( then Peking) in China. Ever since I came back to Jalandhar about 6 months before, the political dust was being raised by the all concerned and the political mercury was on the peak inspite of a cold winter. On suggestions from here and there, I seriously considered to jump in the fray and join pu 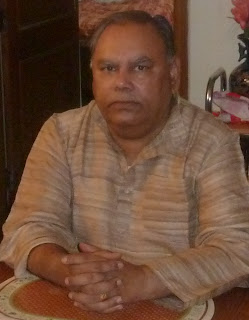 blic life as my second innings after my retirement from the IFS. But I could not find myself suitable for the job in which both money and muscle play an important role. I do not have these important ingrediantes to be in electoral politics in India. Nevertheless, I followed the political developments and more so the ongoing elections in Punjab with keen interest. I was in Delhi/Gurgaon last week and came back to Jalandhar only yesterday night to excercise my vote in the Jalandhar Cantonement constituency. We, with my wife Vidya, voted at the Government Primary School in Khurla Kingra. I was excited as we could participate in the election process, which is very vital for a democracy, after a long gap ( I voted in the 1977 Lok Sabha election in New Delhi) due to my postings abroad in the Indian Embassies. Let me share with you some of the impressions which I could make about the elections in Punjab.
* Family oriented politics ( Bhai-Bhatija wad) is getting strength in politics which is not good for a democracy. It is true of the Akalis and of the Congress.
* Money and Muscle tend to play a role in electroal politics which unfortunate and is a negation of democracy.
* Spiritual/religious deras tend to play an important role in politics which is not good for the health of the democratic system and the society at large. All the parties and the political players, without exception, associate themselves with these deras, willingly or otherwise.
* Youth participation in politics seems to be gaining strength which is good.
* Elections are less noisy, due to code of conduct introduced by the Election Commission, which is good.
* Election process is getting streamlined and better. We did not have Voter Cards as yet but the Voter Slips with Photos delivered at home by the official machinery made the excercise easy and we could cast our vote without any hassle.
In addition to these broad observations, I would like to make a focussed one. Punjab has the highest number of dalit population, around 30%. In some of the constituencies, the number of dalit votes is around 35-40%. It goes without saying that dalit candidates would make it to the Assembly from the reserved constuencies. But why canot they make it from the general ones ?Why the dalits have not been nominated by any party from the general constituencies. While we need to consider these questions, it will not be out of place to mention that in the coming years in Punjab the dalit question will be a live one. The dalit assertion, and rightly so, is on the rise. But let me add in haste that dalits themselves are to blame if there are not getting their right space and share in Punjab. Dalits are a divided lot. The dalit deras are short sighted. Instead of bringing them together and getting them united, these deras are playing a negative role, knowingly or otherwise. The dalit intelligentia shall understand this and do something to rectify the situation.
The redeeming feature of the democracy at work was that the elections were smooth inspite of many negative aspects like booze and cash playing its role. The polling booth where we went to cast our booth was well managed. The voters in the quoue were orderly and reticent. Let us wait for the results on March 6 and hope that the next Government takes it seat and serve the masses and to the value of democracy.
Posted by ramesh chander at 10:12 AM