On my retirement in December 2010, We came back to India and moved into our flat at the IFS Apartments in Gurgaon in January 2011. My native place is Jalandhar and I personally felt like going back to my roots and settle down in Jalandhar. Owing to some hesitation by my wife Vidya, we took sometime to decide. Nev 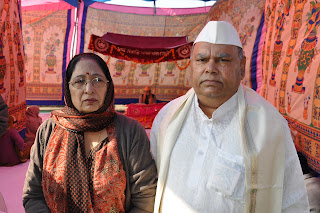 ertheless, we acquired a small flat at the Silver Residency Apartments near the TV Tower on Nakodar Road in Jalandhar in February, 2011 itself. It was the correct option rather than undergoing the labour and trouble of building a house and also because of security considerations as we tend to be flexible in our movements to Gurgaon or abroad as and when desired. Finally, I could convince Vidya and we decided to move to Jalandhar in July. Though the flat was ready to enter yet it was to be furnished as per our needs. It took sometime as I found that it was not easy even if one is able or willing to spend money. It was frustrating to begin with but by October/November, we were settled in our new flat. It is customary to have a HOUSE-WARMING ( Greha Pravesh) Ceremony and we also decided have a simple ceremony in this regard. We got little late in this regard due to some logistical considerations. Mahesh ( son of my brother Kishan) was getting married in the first week of January 2012. The family was to get together for the purpose including my son Naresh and his family who live in Stockholm ( Sweden).
Accordingly, the Greha Pravesh was done on January 8, 2012 with the Path ( recital) of SUKHMANI SAHEB and the SABAD KIRTAN. It is a customary and accepted norm to do so on such occasions. The path of Sukh 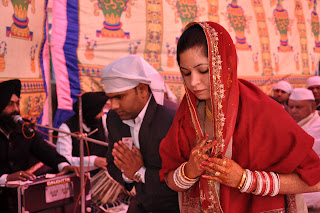 mani Saheb is meant to invoke the blessings of the Almighty WAHEGURU, in terms of the Sikh rites, to pray for happiness and peace in the new house. The Path and the Kirtan was followed by Langar ( community kitchen - frugal lunch). All our immediate family members and relations and friends from the society were invited. I think it is a good tradition to announce the new residence and get social. Since I am new, after a long time abroad, in Jalandhar, my brothers Kishan helped in arranging the Langar and Pammi in putting together the Path and Kirtan.
It was a happy occasion and a good family re-union to start on a good note in the New Year.
Posted by ramesh chander at 10:29 AM