Guru Ravidass Prakash Utsav was celebrated with the desired enthusiasm throughout India and abroad by the followers of the great Guru Ravidassji. on February 7. The day is an annual event of note not only at Bootan Mandi in Jalandhar but also throughout in Doaba region where the dalit followers of Guru Ravidass are concentrated and are well placed for the last 80 years or so. For the successive second year, I am in Jalandhar and observed the celebrations first hand.
The Shoba Yatra and the Nagar Kirtan were taken out in the city with all pomp and show on February 6. It was a sea of humanity at loose. The Yatra was joined by all the local dalit organisations and forums in and around Jalandhar city. The entire route of the Yatra was given a festive look with buntings and flags and was punctuated by the podiums with DJs and loud 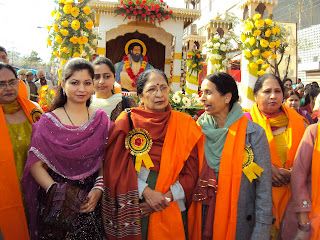 speakers playing glaring music singing the praises of the Guru and spirited numbers like " Hun Sare Kar Lao Eka Beguampura Vasauna aan " etc. It looked as if the whole city has come to streets. It is to be noted with appreciation that the entire route was spread out with Langars of lunch, fruits, sweets, water, tea and other food stuff to serve the moving caravan of the great Yatra. I am happy to observe that for last about 25 years the workers of Soccer International ( a big local company dealing in supports goods) under the stewardship of my younger brother Krishan arrange a big Langar near the Lovely Sweets on Nakodar Road and extend warm welcome to all the participating groups in the Yatra. It is good and healthy tradition. The strength of the community was at show. The energy and awareness which has come, of late, to the fore was clearly demonstrated. But the flip side of the great show was lack of discipline both on the side of the participants, organisers and also the authorities. The followers of the great Guru should consider this and set an example of order and discipline. It will add to their credit and raise their status. Almost all the vernacular dailies carried out the stories and photos of the Yatra and rightly so.
On the Gurupurab day that is February 7, Kirtan Darbars were arranged in the presence of the Guru Granth Sahib and the newly established Amritvani followed by Langars in the day time. The entire Bootan Mandi area right from the Wadala Chowk to Abadpura was turned into a great Mela in a total festive mo 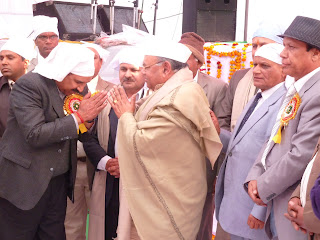 od. From the late evening to the late mid-night, a number of functions were held to sing and promote the mission and philosophy of Guru Ravidass. These functions were well attended where important and known singers performed in the presence of leaders including sitting and former MPs. MLAs, senior Bureaucats etc. The message was clearly emerging. The dalit community is awakened. It is bubbling with energy. It looks for avenues to find its due space and place in the society. As poet Iqbal put it " jara si nam ho to yeh mitti badi jerkhez hai saki ". But unfortunately, the leadership is torn and divided. They are doing a disservice to the whole community on account of their selfish and vested interests. In Bootan Mandi, a few self appointed and self styled Seths with narrow agenda and family fueds are holding the entire society to ransom. They must learn forthwith and stop. The caravan will go on with or without these short sighted individuals. Let us unite for the good of the society as I said in my speech in one of functions on February 7 at Bootan Mandi ' Tum hi tum ho to kya tum ho; Hum hi hum hain to kya hum hain ".
PS; I was one of the Panelists on a discussion on the Jalandhar Doordarshan on the topic " Relevence of the Vani of Guru Ravidass in the contemporary times' telecasted on February 7.
Posted by ramesh chander at 3:16 PM