AS I FEEL IT 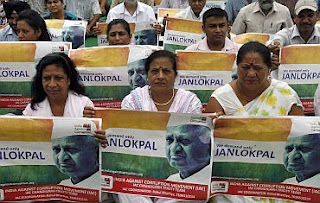 Today’s headlines in the various media organs read – ‘ Anna Arrests Government ‘ - ‘ Anna Marches and Government Crawls ‘. I wrote in this blog about Anna Hazare’s agitation against corruption and the related issues. The situation and the ground realities have changed fast and are taking a new turn which has been reported by the media in flowery and poetic headlines. It is not an ordinary development in the national landscape of India. Though I have full faith in the constitutional set up of India and I have supported the constitutional means to affect any change to meet the new challenges yet Anna Hazare’s role and actions have provided some fresh inputs which may 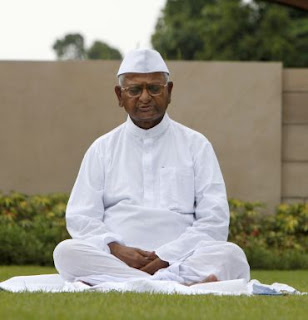 not be ignored. It is clear that Anna Hazare is, as of now, a potent force which has an ample and unstinted public support. The issue of corruption is important and the public upsurge in support of Anna Hazare and the Civil Society is a clear manifestation that the scourge of corruption needs to be addressed at a war footing. It is a matter of satisfaction that the constitutional machinery is still working and it shall remain so, if India has to survive. Some of the points which come to my mind and shall not be lost sight of are:
i) It is gratifying to note that the public uprising in support of the issue of corruption taken up by Anna Hazare and his associates is spontaneous and peaceful. It is not a small development. The credit goes to Anna Hazare and the Indian public. It is one of the most noteworthy inputs of the movement of Anna Hazare.
ii) The movement against corruption is wide spread in the breath and length of the county. It is so far is not marked by any political color generally. The movement is not sectarian and caste oriented luckily though Arvind Kejriwal in the initial stages termed the Lokpal Bill as anti-dalit and anti-poor. It is satisfying to observe that Kejriwal’s line of thinking did not find any mention later.
iii) The movement is no more an agitation alone. It has been supported by the wide spectrum of political establishment and parties as far as the issue of corruption and the mechanism to handle it is concerned. There may be differences in the means to achieve the goals but there is full convergence on the ends. The spiritual and moral Gurus like Sri Sri Ravi Shankar and Baba Ramdev, who enjoy a consider clout and following in the general public have supported and stood by Anna Hazare.
iv) Media appears to be enjoying the festival of democracy spear headed by Anna Hazare. We all know that media has an important role to play not only in informing the public of the state of affairs as correctly and faithfully as possible but also in molding the public opinion to conform to the constitutional and desired needs in the larger interests of the country.
All said, let me come to yet another aspect which is equally important. There are no two opinions that the issue of corruption needs urgent and tight handling. Anna Hazare and the Civil Society along with the Government, the Parliament and the other political players are seized of the matter. Anna Hazare and his associates intend to have a tough legal framework as against the so called soft approach of the Government. The agitation and movement of Anna Hazare has proved and demonstrated its strength in the form of peaceful public upsurge in the country. The Government has been made to relent and listen to the public demand. The forces of democracy are at work. Anna Hazare shall be mindful of the practical and constitutional requirements to deal with the issue. PM Manmohan Singh recognized the demands of Anna Hazare in the Parliament on August 17 and said “I acknowledge that Shri Anna Hazare may be inspired by high ideals in his campaign to set up a strong 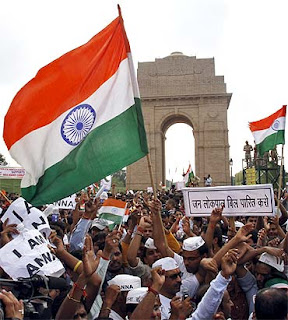 and effective Lok Pal. However, the path that he has chosen to impose his draft of a Bill upon Parliament is totally misconceived and fraught with grave consequences for our Parliamentary democracy “. Anna Hazare, to my mind, has made his point from the Tihar Jail. Ramlila Maidan shall send positive messages to the masses that we mean business in cooperation with the Government and in accordance with the constitution of India. It would not be good to further erode the authority of the duly elected and established Government. Anna Hazare and the public at large while celebrating the victory shall feel contented as their voice has made all the difference as, in the poetic words of Dr. Iqbal, the message is in the air and the Government cannot be oblivious of this:
उडाए कुछ बर्क लाला ने कुछ नर्गिस ने कुछ गुल ने,
चमन में हर तरफ बिखरी हुई है दास्ताँ मेरी !
उड़ाई कुछ कुमरिओं ने तुतिओं ने अन्द्लिवों ने,
चमन वालों ने मिल के लूट ली तर्ज़े फुग्हन मेरी !
Posted by ramesh chander at 11:46 AM