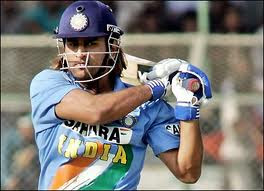 The Cricket World Cup is being played. Both India and Pakistan are the two important teams in the game. India's share and position in the international sports hierarchy is not high. It is much to be desired given the size of the country, home of a billion plus people. But it is gratifying to note that cricket is very popular in all the segments of the society. The performance of India is being watched with a lot of expectation. The Team India has done well so far. It has already made to the semi-final match of the Cup in the coming week. India can boast of Sachin Tendulkar, the best batsman, the cricket has produced. A number of other Indian players, the likes of legendary Lala Amarnath, have made a mark on the scene. Though I don't know much about the game yet would like to add with a sense of affinity that I was the contemporary of Mohinder and Surinder Amarnath, who were the leading national and international playes, in my school years at the Saindass School in Jalandhar. One of the semi-finals will be played at Mohali between India and Pakistan on March 30. It has generated and rightly so much expected interest and heat in the game, India and Pakistan the two adversaries not only in the game but otherwise also in all the meanings of the word. It is known fact. The people are interested on both the sides. The fever is getting high by the day. The Governments are not oblivious of the ground realities. PM Manomohan Singh has taken the initiative and made the first diplomatic move to invite President Zaradari and PM Gilani of Pakistan to Mohali to witness the semi-final between the two cricket giants. The idea is to lessen the tensions

between the two otherwise estranged neighbours and bring the people together in the spirit of the game. India has been doing so every time as and when such an opportunity arises. PM Rajiv Gandhi invited President Zia-ul-Haq and PM Manmohan Singh President Musharaf in the earlier events. Though these gestures are only symbolic as a part of diplomacy yet these are important and appreciated. It is said that you need two hands to clap. Let us hope Pakistan that Pakistan understands this. PM Atal Vajpayee, taking a dig at Pakistan on such exchanges, said in his usual poetic way:

India may win or loose in the game at the World Cup। But it will remain in the game of diplomacy aimed at improving relations between the two ountries - INDIA and Pakistan. I am reminded of Dr. Iqbal's thought provoking poetry: