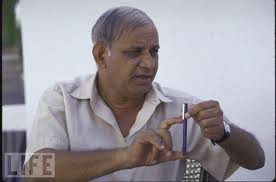 Today, March 15, is the birth anniversary of Babu Kanshi Ram ( March 1934 - October 2006 ), a great dalit leader of contemporary times. Babu Kanshi Ram belonged to an ordinary family in Ropar district of Punjab. After getting B.Sc. degree from the Punjab University, he joined the DRDO (a Ministry of Defence organisation) for the bread and butter and did not have any political inclinations. His posting in Pune exposed him to Dr. B.R. Ambedkar and his mission. The caste based discrimination and high handedness of the system touched and moulded the young scientific mind and temperament of Kanshi Ram. He started taking part in social and community activities. Based on the dictum of Dr. Ambedkar " Educate, Organise and Agitate ", Kanshi Ram along with other activists, established Backward and Minority Community Employees Federation (BAMCEF) in 1978. He consolidated his activities and floated another outfit the Dalit Soshit Samaj Sanghrash Samiti (DS4) in 1981. Gradually these efforts came a full circle and he founded the Bahujan Samaj Party (BSP) in 1984 to fight the ' forces of status qua ' and start the ' politics of transformation '. It was a one man army to begin with but slowly with his followers like Ms. Mayawati, who is currently the Chief Minister of UP state, and others, the BSP became a political force to reckon with in the emerging political battlefield. He pronounced with regard to his missionary approach and involvement " I will never get married, I will never a 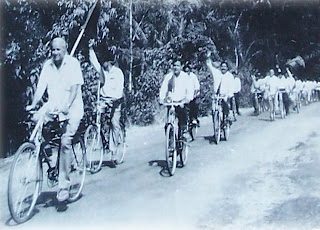 cquire any property. I will never visit my home, I will devote and dedicate the rest of my life to achieve the goals of ' Phule - Ambedkar Movement'. With the vision and strategy of Babu Kanshi Ram, the dalits and other under privileged came around. The much needed awakening and realisation to take a due share in the governance, not as a charity but by their own right, was generated by the untiring efforts of Kanshi Ram. The BSP could make a big dent and make its mark in UP and many other states and also could succeed in sending their representation to the Indian Parliament. Babu Kanshi Ram, in his life time, emerged as the symbol of growing political role for the dalits in the current scenario. Let me put it in a poetic parlance:

Babu Kanshi Ram gave the potent message of social change through the political route. Dr. B.R. Ambedkar was an intellectual and a visionary who started the empowerment of the dalits much before India's independence in 1947 and also by his positive and major contribution in the making of the constitution of India. Kanshi Ram carried forward Ambedkar's mission to complete the unfinished agenda by organising the dalits and other weaker sections of the society by making them realise that they were the masters of their destiny in the democratic polity of India and they should realise their strength. This message of Kanshi Ram changed the character of Indian politics and dalits became a formidable political force. I read some years before in one of Indian magazines what a leading and renowned political commentator and columnist M.J. Akbar wrote about Kanshi Ram - ' He has come but yet to reach '. It is so. But reach they must. Babu Kanshi Ram died in October, 2006 after a prolonged disability due to a brain stroke and other ailments. His agenda of social and political transformation is still incomplete and would need further concerted efforts. It would be a true tribute to the memory of the worthy son of India Kanshi Ram who is called, out of reverence, Babuji or Manyawar or Saheb, by his followers and rightly so.

I did not have the privilege of meeting Babu Kanshi Ram personally. I could see and listen him at a function he organised at a community centre near the Ambedkar Bhawan at New Delhi sometime in 1976 at the formative years of his and mine career. But I heard quite a lot about Kanshi Ram from my friend Prem Shant and my brothers in Jalandhar. Kanshi Ram was a simple man but was down to earth in public matters. My brother Kishan told me about a public meeting in Jalandhar in mid 80s which Babu Ram Kanshi Ram was to address. There was a lot of enthusiasm among the people। Kishan as a community activist was much interested in the success of the function and he went to see the arrangements some hours before the actual time of the public meeting. He found that Kanshi Ram himself, who was already a respected and recognised leader of the community, was personally supervising the erection and construction of the stage in disguise or incognito. The meeting was huge and unprecedented. There was no place even to stand. The sea of humanity inundated the arrangements and Babu Kanshi Ram finally arrived in an impressive but simple manner as a proud leader. It was his dedication and relationship with the masses. He was not not a sofa sitting leader who worked from the cosy drawing rooms. Babu Kanshi Ram belonged to the people whose destiny he wanted to control and guide.