Malice towards None - As I Feel

I retired from the Indian Foreign Service (IFS) on December 31, 2010. We returned to India in January, 2011 from Minsk from my last station of posting as Ambassador of India to Belarus. As a matter of routine, I tended to keep track of the community matters particularly of my home town Jalandhar. Though we have a flat at the IFS Apartments in Gurgaon to live in yet I thought of having a small establishment in Jalandhar too and acquired a flat at the Silver Residency Apartments at Nakodar Road ( renamed as Ambedkar Marg), near my native place Bootan Mandi. The idea was to integrate and associate myself with the community, as my post retirement activity, in whatever small way I may be able to do, in tandem and cooperation with my old colleagues and friends who are living in and around Bootan Mandi. I visited Jalandhar and as usual stayed with my brothers in Bootan Mandi in February, 2011. I was totally disappointed, to be frank, with the state of affairs and the behaviour of some of my friends and fellow Bootan Mandians whom I always held in high esteem. I tried to get in touch with them and establish contact. But to my utter surprise, the response was lopsided and rather negative. The community leadership was divided with their own personal agenda of either business interests or family feuds. It was an unfortunate situation which was detrimental to the interests of the society and community affairs. Obviously, I was not interested in joining the group politics but could not help associating myself with the fair and bonafide activities to some extent. One of the groups assumed and decided to completely ignore me and my presence on groundless assumptions. I could not get the chance to sit with them and speak my mind in spite of the fact i tried my best to send my message across with a view to strive for unity and togetherness. It was the height of self righteousness.
The major event in February was the Gurpurab - Guru Ravidass Jayanti. Bootan Mandi is considered to be the hub of the celebrations in the area and rightly so as B 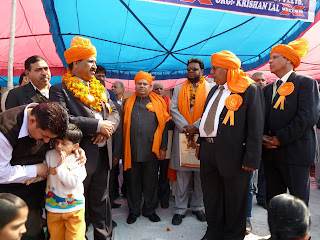 ootan Mandi always acted as the torch bearer or the flag bearer of the spiritual and social activism by the community. Guru Ravidass Dham, a nicely conceived project, was in utter neglect as the so called Kartadhartas (leaders) were fighting for control of the project for their selfish ends. The irony of the matter is that the Guru Ravidass Welfare and Education Trust which is headed by only one person for about a decade did not do anything in the past except chairing the functions arranged with public money and has neither any welfare scheme nor it has any educational project in hand. The name of the Trust itself has no justification rather it is negation of welfare and education.. It is some food for thought of some of my educated friends who are associated with the so called Trust.. The Dham, naturally, is the property of the community and shall be open to one and all. But I was told that the Seths who control the project allow or deny the access to the Guru Dham on their whims and fancies and political orientations. It shall be totally unacceptable. The Dham is not a personal property of any Seth or his/her cronies. I think a democratically elected Committee shall be formed and the project handed over to it. It will be unfortunate if the project gets stalled in the process because of the selfish agenda of the self seekers.

Even the great Guru has been divided। The Gurpurab was fragmented. The respective groups held separate functions including the Langar and the Shoba Yatra. The public money collected for the purpose by both the groups was spent mindlessly. The sense of one-up was prevailing which tended to increase heat and acrimony. I spoke at one of the functions and pleaded for unity in the larger interest of the society. But it seemed that the line of divide was getting deeper and bigger. The false ego and money power was getting stronger. The people and the society is bound to suffer and the struggle for empowerment of the dalit masses will get weak in the prevailing situation. The movement and mission of the Guru has been compromised by the so called followers themselves. The image of Bootan Mandi has been tarnished.May Guru Ravidass provide and grant us sense and sanity.