Future of Dalits and Minorities in the Indian Democracy

Future of Dalits and Minorities in the Indian Democracy

Jaagda Punjab, a socio-political NGO steered by Prof. Manjit Singh and Dr. Sukhdev Singh Sirsa and others organized a seminar at the prestigious venue in Jalandhar  – Desh Bhagat Yadgar Hall on November 7 on the topical subject “Future of Dalits and Minorities in the Indian Democracy. On information and an open invitation 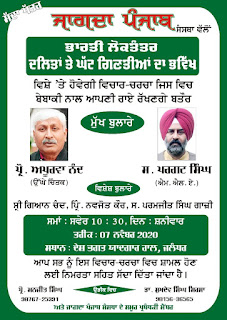 from my friend Lakhvinder Johal of Punjab Press Club on Facebook, I ventured to get out in these days of self-restraint in the wake of Corona virus to listen to the well placed main speakers – Prof. Apoorva Nand of Delhi University and MLA Pargat Singh. I was not disappointed as the seminar was a well conducted event with well-meaning contents, relevant and of interest in context of the ongoing situation in the country.

Prof. Manjit Singh set the ball in motion with his introductory remarks and informed that Jaagta Punjab was a newly formed outfit to provide a platform to create much needed awareness in Punjab about the prevailing situation in the country and put the things in perspective. Principal Navjot Kaur of Layalpur Khalsa College spoke spiritedly from the Left point of view and lamented that Indian democracy was not in its best of health to communal and sectarian forces gaining strength. She was of the view that the term ‘dalit’ should not be confined to caste/birth based criteria but to economic and political marginalization. The other speakers did not agree with her and said that as long as caste remains a factor all so called low castes would remain dalits. Member of the Punjab SC Commission, Gian Chand spoke and gave a good and clear presentation on the subject. He said that it was a matter of great regret that the lofty vision of our forefathers was willfully being distorted for narrow political agenda. MLA Pargat Singh, a sober and dedicated politician who was rightly introduced as an ‘honest politician’ chose not to speak much on the theme of the seminar but asserted himself on the dismal and worrisome situation in Punjab and the country at large, created by the wrong policies and self centered fellow politicians. He spoke with conviction but in the process touched a much maligned subject of ‘Reservations to Dalits’ which was taken as an anti reservation stand by some sitting in the audience during the later interaction. The main speaker Prof. Apoorva Nand in his speech referred to MLA Pargat Singh’s views and set the position in its right perspective by saying that Reservations would remain as enabling provisions till the social inequalities remain. Prof Apoorva Nand, as the lead speaker, spoke with clarity and authority on the subject of the seminar as a scholar and a good communicator.  He gave all relevant details and said that it was unfortunate that dalit and minority rights were much threatened particularly since 2014 when the Hindu Right Wingers came to power at the Centre and in many States of India. He referred to the recent happenings in France, Austria and other places in Europe in which Muslim minority was involved and appreciated the correct stand taken by the restive governments in those countries in dealing with the minority. Prof. Apoorva Nand was candid in his views that it was a matter of concern that dalits and minorities were not treated fairly in India and our secular and democratic credentials were under strain due to communal polarization which was intentionally created by the ruling outfits. He gave the examples of the terms like ‘love jihad’ in currency these days, recent legislation on citizenship, Bhima-Koregaon and Hathras incident, inter alia to support and justify his observations. I was surprised and much appreciative of the one assertion he made in the course of his well argued presentation. It pertained to the Sikh Riots of 1984 – ‘Katlogarat’ in his words. He candidly said that all along we have been trying to step-aside the truth consciously that more than 4000 Sikhs were butchered during the ‘Katlogarat’ and added that it could not have happened or committed by a handful of politicians. It was an act of the communally oriented majority community, he hinted obliquely. It was a bold statement which the worthy speaker made with a sense of intellectual honesty. Later during my brief interjection I took the opportunity to compliment Apoorva Nand’s guts and ability to say what he felt. Dr. Sukhdev Singh Sirsa ably answered some of the queries and observations raised by the discerning members of the audience.

Later at the working luncheon/langar, I briefly interacted with the organizers and Prof. Apoorva Nand and his gracious wife. Both of them partook their food with us standing at the fag end of the queue unlike most of the Chief Guests/VIPs in such functions. I was impressed by their simplicity and down to earth demeanor.

Posted by ramesh chander at 4:43 PM