Constitution Day of India is observed on November 26, the day when the constitution of India was formally and finally passed by the Constituent Assembly of India on November 26, 1949. PM Narendra Modi’s government officially instituted the Constitution Day in November, 2015 and ever since it is observed throughout India and beyond with all solemnity and dedication and rightly so.  Governments are expected to do some more to educate the common people to know and respect the constitution with a view to strengthen the edifice of our democratic and secular setup enshrined in the 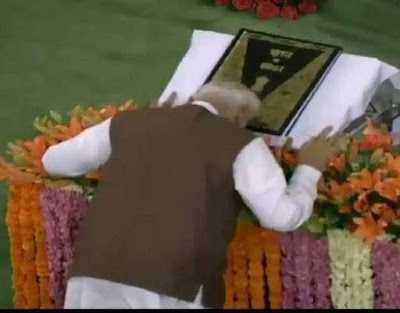 constitution and further dedicate ourselves to the lofty ideals of Liberty, Equality, Justice and Fraternity to all the citizens of India. It is all the more important to heed to the cautions and warnings given by the Chief Architect of the Constitution, Babasaheb Dr. B.R. Ambedkar on November 25, 1949 in his last speech in the Constituent Assembly before he moved to pass the Constitution not only to transform our newly established political democracy into social and economic democracy but also to ward off the dangers of putting our newly attained independence into peril if we did not conduct ourselves to ‘constitutional’ means as stipulated in the constitution. It is a matter of satisfaction that PM Narendra Modi, in spite of the perceived perception being spread by some of the opposition parties that BJP and its mentors in the RSS intend to subvert and change the constitution to promote their communal agenda, categorically set at rest these rumors many a times and reiterated that the government will do every best to educate the masses particularly the youth to educate them on the salient features of the constitution with a view to entrench and preserve the cardinal principles and values of the constitution. Speaking on the subject on November 26, 2020 in the Conference of Presiding Officers of Legislatures, PM Narendra Modi gave an analogy of KYC – Know Your Costumer as KYC – Know Your Constitution - to spread the much needed awareness about the Constitution of India. It is time to take these things at their face value rather than expressing apprehensions. The constitution of India is an important and potent document capable of dealing with all untoward eventualities, if such a situation arises.

With this background, I may report that I participated, as an apolitical person, in a function to observe Constitution Day arranged by the SC Morcha of BJP in Jalandhar as a lead speaker. It was a good gesture by the BJP leadership. I wish the other parties would have taken such decisions as the constitution belongs to the nation and not to any one party or two. The Constitution Day is to underline the principles and values of our polity and society and it should be a matter of national interest and concern.  While emphasizing the need to avoid the “Grammar of Anarchy” as warned by Dr. Ambedkar if

we continue to follow the “unconstitutional means” to register our demands and protests, I underlined the need to understand, implement and celebrate the constitution with all seriousness as India was India or Bharat because of the constitution alone. At the risk of offending my hosts, I decided to speak my mind and expressed displeasure on the fact that 99% of the audience, I could guess, comprised of people from dalit communities. Why should it be so?  Does the constitution belong only to dalits? There is a need to change the mindset, if we really want to bring about “Samrasta” in the society as propounded by RSS and its affiliates. Others namely; Former Chairman of the Punjab SC Commission Rajesh Bagha, Former Mayor Surinder Mahey, Community Activist Jiwan Singh and Convener of Jalandhar SC Morcha of BJP Bhupinder Kumar among others spoke at length about the constitution and its Chief Architect Babasaheb Ambedkar. It was a well attended function.

In the evening, Shri Guru Ravidass Educational and Charitable Trust observed the Day at Shri Guru Ravidass Dham at Bootan Mandi with Ardas and prayers for the welfare of the community. It was a matter of gratification to note that the young girls of the community, for the first time, participated and presented themselves in a befitting manner. Kashish read the poetic Preamble of the Constitution with an appreciative flare. Kirtan Trainee Ashwina, Jyoti a district topper 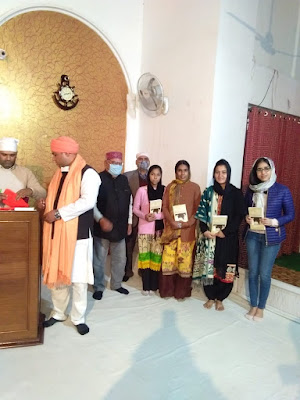 of 10th standard, a budding Mountaineer and student of Post Graduate student Priya Ambedkar spoke with full confidence and dedication on the constitution and Babasaheb Ambedkar. Community Activist Paramjit Mahey was the lead speaker at the occasion. As always, he spoke with conviction and in his impressive brief speech cautioned that any attempt to undermine and change the fundamentals of the constitution may result in bloody reaction and added that, as true followers of Babasaheb, we should try our best to diminish such an eventuality. Poetic interventions were provided by acclaimed poets, Param Dass Heer and Rajinder Thapar. Finance Secretary of the Trust and Former GM of Coal India Amar Nath Ram gave the vote of thanks and spoke at length about the constitution. I, along with Swami Balram Rai, was invited to the podium to honour the poets and young girl participants with Saropas and copies of the Constitution of India which was a pleasure. I will not conclude this piece without appreciating and congratulating the management headed by Om Prakash Mahey, particularly Prof. Mahesh Chander, who thoughtfully chalked out and aptly conducted the programme, the Trust and the Dham for arranging this befitting event and involving the young girls of the community. I wish them all the best for further success.

The Constitution of India will remain and prevail to make India stand up to meet the challenges of 21st century.