Since long I have been thinking of writing about an unsung dalit leader, a staunch Ambedkarite and community activist of yesteryears – Charan Dass Nidhadak. I tried to find some information about his early life and origins from some of my friends and acquaintances and also on Google but could not succeed. It is a matter of pity that we tend to forget and ignore our leaders easily, particularly those who were simple and quite. Charan Dass Nidhadak was one of them. It is also a matter of further regret that there are some well recognized people around, with whom Nidhadak Sahib worked to carry forward the caravan of Babasaheb Ambedkar, are willfully and consciously reluctant to remember and recognize him. With this background at the back of my mind, I thought of remembering Charan Dass Nidhadak who had left a good impression on my mind during my formative years in Jalandhar in the 1960s.

Nidhadak Sahib was a tall personality always dressed in Khaki with a well groomed stick in hand and an impressive khaki Pathani turban with “Kulla” – a cosmetic mount in the middle. He looked like a ‘Thanedar’ to a common man. I understand he was a native of some village near Phagwara near Jalandhar. In the 1950s, at a middle age of around 50, he was already a recognized leader of Ad-dharam 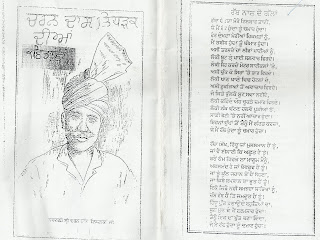 Mandal, Scheduled Caste Federation and later continued with Republican Party. I distinctly remember yet another young leader of these dalit outfits, Lahori Ram Balley and Duni Chand Shahpuri, Piara Ram Dhanowali, Ajit Kumar among others, always introduced Nidhadak Sahib as a ‘Bazurg Aggu’ - an experienced and senior leader. Nidhadak Sahib was a missionary poet of sorts apart from an impressive and excellent communicator as a speaker with his rustic style tinged and laced with witty and humorous anecdotes and narrations. People liked him as a son of the soil though he did not have any grade of formal education. He enjoyed his prowess of making his audience spell bound and relaxed in public meetings – Jalsas. Nidhadak Sahib reached the higher echelons of Republican party and rightly so. He aalso played an important role and contributed to the struggle of community including the RPI agitation of 1964.  I read some of his missionary poems and songs in the Bheem Patrika, a mouth piece of  ‘Ambedkar Thought’ edited by Lahori Ram Balley till he parted company with Charan Dass Nidhadak and others on the issue of Punjabi Suba in 1965-66. I also vividly recall Charan Dass Nidhadak often visiting my father and others, as a PR exercise to remain with the roots, listening to him with interest as he used to narrate interesting and funny stories with ease. In the process, I liked and appreciated his songs and poetry sung by a Tumbi singer Lal Chand Kamla of Reru village in public meetings and occasional recordings done by Seth Mool Raj the scion of the family of Seth Kishan Dass, my fellow Bootan Mandian and a close associate of Babasaheb Ambedkar, with his prestigious recording machine with spools. I even mugged some of his poems/songs like:- 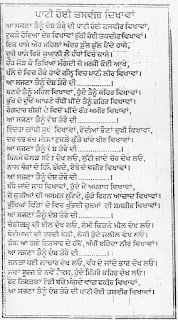 Back home after a long diplomatic career, I always felt like knowing and reading more of Nidhadak Sahib. I could not find much. With great effort, I could get a Xeroxed copy his published poems from a book vendor located at Ambedkar Bhawan at Nakodar Road. It will not be out of place to mention that Charan Dass Nidhadak was one
of the founders of the Ambedkar Bhawan, a nerve centre of the Ambedkar mission and philosophy in the region. Alas! Nidhadak Sahib died as an unsung hero of the community. He deserved much better. With this, I close this with respect and regard to Charan Dass Nidhadak, a leader by his own right. One of his poems “Paati Hoi Tasveer” is as relevant today as it was before.
Posted by ramesh chander at 6:05 PM