Good Wishes to the AAP

For the last more than two months, I have been writing every Monday An Open Letter of an AAM AADMI expressing my thinking, making comments and observations and also assessments on the forthcoming Punjab elections with particular reference to the Aam Aadmi Party of which I am a humble volunteer. This will be my last letter before the elections to be held on February 4. I will 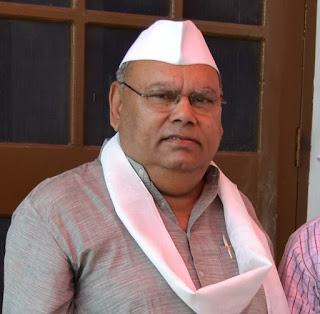 conclude this series of letters on Monday, 5th February with some more inputs and calmly wait for the results of this dance of democracy on March, 11 in the run up to formation of the new government in terms of the popular verdict given by the people of Punjab.

Both the AAP and the players have done their best. I take this opportunity to wish the AAP and its candidates all the best and success in realizing their aspirations and goals.

As I have been reiterating that dalit vote in Punjab is crucial. It has the potential of making or marring the next dispensation though it is a divided lot in itself. All parties are not oblivious of this ground reality and focused their campaign in the Doaba region. PM Narendra Modi addressed a public meeting on January 27 at Jalandhar. BJP leader Vijay Sampla, while speaking at the rally, with a view to woo the dalit vote bank, specially mentioned about the Akali-BJP government’s flagship projects – Guru Ravidass Memorial at Khuralgarh and Swami Ram Tirath Memorial at Amritsar. Congress Vice President Rahul went a step further. He not only addressed a rally at Phillour on January 28 but also visited Sachkhand Balan Dera at the outskirts of Jalandhar - the Dera is said have a considerable influence among the dalit voters in the region. Rahul Gandhi declared to name a University after the dalit icon Dr. Ambedkar. AAP while releasing its final manifesto at Chandigarh on January 27 highlighted their offer of the post of Deputy CM to dalits. BSP supremo Mayawati addressed an impressive rally at Phagwara on January 30. It is assessed that a mere 5% vote-swing, in at least 20 constituencies in the Doaba region where dalits are concentrated, will decide the outcome of the elections in the run-up to forming the government. It seems to me, as an Aam Aadmi, right or wrong, that AAP, unlike the traditional parties be it the Congress, Akali Dal, BJP and even BSP, is not fully alive to this hard reality of the Punjab electoral battle.

With a view to rectify the AAP view and placate the dalit educated class, as an Aam Aadmi, I suggested the following three points in this regard to the party leadership for their consideration. I don’t know the party reaction so far except that my communication was duly acknowledged by the high offices of the party. These points are:

1) Support my proposal to declare April 14 (birthday of Dr. Ambedkar) as International Day of Equality - I made this proposal to EAM and PM in May, 2015 and followed up with others. As a result, UN at New York celebrated Dr. Ambedkar's 125th anniversary on April 13, 2016. The enclosed letter of Punjab Speaker, Charanjit Singh Atwal to PM will inform you of the current position of the proposal. My suggestion to Arvind Kejriwal and Sanjay Singh is, as already suggested to the Punjab Dialogue, to make an announcement and assertion that if AAP comes to power in Punjab, the Punjab cabinet and the assembly will pass a resolution and forward it to the Government of India and PM for making a demarche to UN in support of the proposal to declare April 14 as the International Day of equality. It will catch up with the imagination of the dalit youth and benefit the party a great deal. For any further information and clarification, I am available at anytime.

2) Support to Training School for Entrance to Politics - Dr. Ambedkar started this School in July, 1956 at Bombay just a few months before his untimely demise in December, 1956. The School could not continue. There is a proposal to revive the School. The enclosed brief note on the subject will give more information. Given the AAP's own agenda to clean politics and inculcate moral values to politics, support to the revival of the School started by Dr. Ambedkar will go a long way in attracting the imagination of the followers of the greatest son of India. Dr. Shiv Shankar Das and Dr. Kshipra Uke, two JNU scholars have taken up the project. They visited Jalandhar last week and discussed the matter with Ambedkarite intelligentsia. Dr. Kshipra Uke may be contacted on Phone: 09868099669 for further details if required.  I am also available for any further talk on the subject.

3) Special arrangements and facilities for dalit youth to get trained for officer level entry in to Armed forces and central para-military and police forces. You are aware that there is hardly any recruitment of dalits into these forces because there is no reservation. In the absence of reservation, it will be good if dalit youth get special training and motivation to join these outfits. AAP may like to take the credit of bring in this out of the box idea. It will be much appreciated.

As I believed in the in the lofty ideal that politicians need not lie, I thought of sharing this with the voters of Punjab before they go for casting their vote on February 4. With this, I would like to conclude my letter with one suggestion and advice to my dalit brethren. It is a fact and I have been repeating and reiterating it quite often that dalits in spite of their demographic position are nowhere near their due space and share in the corridors of power as they are a divided lot and as such does not have any voice. They are divided on the basis of party affiliations and compete among themselves. This fact has marginalized their strength and even existence. What is the way out? The way out, to my mind, is that they that is the community should unite and stand with one party. Which could be that party? In the given circumstances, the time and political compulsions has thrown a viable option in the form of AAP. The traditional parties have failed in addressing the dalit issues. Let us give a chance to the new player that is AAP which professes to be a party standing for systemic change, transparency, social and economic vision for the empowerment of the weaker sections of the society. If dalits unite and stand by AAP and bring in seats to the kitty of AAP in a substantial measure, they every right and chance to ask for their due share in the power structures of Punjab. Why they should contend with the offer of Deputy CM’s position alone? They can and rightly so even aspire for the coveted post of the CM. After all numbers count in democracy.

With this, I wish AAP and its candidates all the best on February 4 and March 11. I stand for change a positive change. 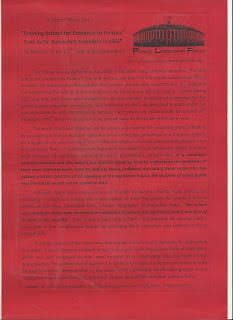 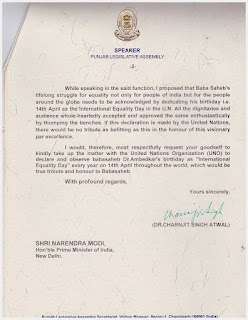 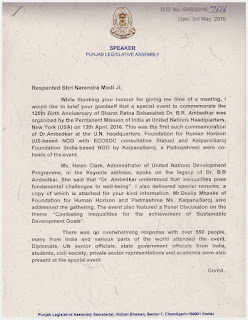