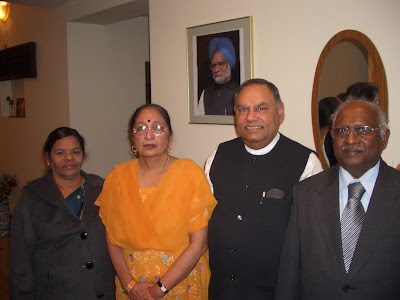 Justice K.G. Balakrishnan belongs to a dalit family of Kottayam district of Kerala. His father was a clerk in a Munsif Court.Facing the caste hurdles of the society, Justice Balakrishnan came up through sheer hard work and occupied coveted posts in the judiciary of India. Commenting on his humble origin Justice Balakrishnanan said ' Really it is matter of pride for us, but what I have achieved is the result of hard labour and integrity '. Indian judiciary needs to develop a social philosophy which should be sensitive to the social aspirations of the masses. Even after more than 6 decades of our independence, only three dalits could rise to be the Judge of the Supreme Court of India - (i) Justice A. Vardarajan in 1980 ( ii ) Justice B.C. Ray in 1986 & ( iii) Justice A Ramaswamy in 1989 other than Justice K.G. Balakrishnan. The situation needs to be rectified through affirmative action even though there is no reservation in the higher echelon of the judiciary.

I have the honour to meet and interact with Justice K.G. Balakrishnan during his official visits to Belarus in April, 2009 and May, 2010. I found him an embodiment of simplicity. He would put the other person just at ease and could continue talking on matters of importance without any sense or hang up of a big man. He would not speak from the pedestal of authority but that of humility. It is a coincident that I had the good fortune to know and work with President K.R. Narayanan, who also belonged to native place of Justice Balakrishnan and also a dalit, in Beijing (China) when he was the Ambassador of India to the Peoples' Republic of China in 1977-78. President Narayanan also gave a few lessons on ' positive thinking ' while dealing with official matters. He was a great man. Justice Balakrishnan told me that his father and President K.R. Narayanan studied together and were class fellows. The life of Justice Balakrishanan is to be emulated by the younger generations particularly that of the dalit community. I have sent a congratulatory message to Justice Balakrishnan today on his high appointment as the Chairman of the National Human Rights Commission which he earned and deserved.