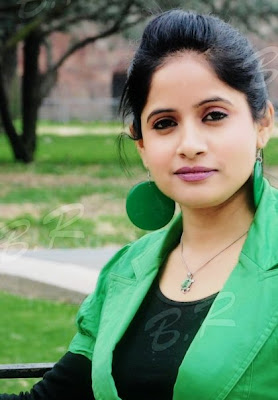 Miss Pooja, the singing sensation of the punjabi song and dance, has created ripples in the cultural life the punjabis not only in Punjab but through out in India and overseas. Miss Pooja with her debut album in 2006 did not see back and gained rural success with the catchy lyrics and high pitched voice. She is rightly called the ' Queen of Duets '. Miss Pooja is instrumental in reviving the culture of duet songs having partnered with the ' who is who ' of the punjabi singers to the full contentment and entertainment of her audiences.

Miss Pooja is the stage name of Ms. Gurinder Kaur Kainth ( December 1979) of Rajpura in Punjab. She is well educated and fully trained in with a Bachelors in Vocal and Instrumental and a Master's degree in Music. Miss Pooja was teaching music before she got acclaim as one of the best punjabi dance ( bhangra/Gidda ) artist and a dynamic singer with an impressive personality. She is by now is the best selling punjabi female singer.

Miss Pooja is the worthy daughter of Mr. Inderpal Kainth, a god fearing dalit family. She excelled equally in singing spiritual and community themes of the sikhs, Nirankaris and those of the great Guru Ravidass as a conscious punjabi. Miss Pooja stole the lime light with her album 'Begumpura Vasauna'. The whole philosophy of Guru Gobind Singh is captured in the line ' एक्स के हम बराक एको पिता बनौना आं ' she sang with an utmost flare and conviction - hats off to Miss Pooja. The whole punjabi community shall be proud of her. She deserves all recognition and appreciation in spreading the message of equality and fraternity of the great Guru Ravidas in the title song of her album ' हुन सारे कर लओ एका ; बेगुम्पुरा वसौना आं ! Balwainder Bhaura's lyrics are not only musical and poetic but also full of culture and tradition. Her popularity in the dalit community has sky- rocketed, if the Internet exposure is any indication. At the same time, it has been noticed that some semi literate fanatics have spoken against her in a foul and disgracing manner. But there is a saying that the dogs bark and the elephant moves on. Let us wish Pooja all the very best and further success in her chequered career for the benefit of the punjabi culture and the community at large.

It may not be out of place to mention that the dalit artists from Jamla Jatt to Hans Raj Hans and many more of equally high calibre have contributed considerably to the music and dance of Punjab - ' गाता बजाता पंजाब '. It is a matter of satisfaction for me that some of my fellow ' Bootanmandians ' in Jalandhar, like Pritam Ramdaspuri, Bibi Nooran, Hans Raj Bukha, Jai Ram Parwana earned a good name in this regard not only for themselves but also for the community. I learnt that even Ustad Puran Shahkoti used to live in Bootanmandi. His students -' चेला ' like Hans Raj Hans, Master Saleem and Sabar Shahkoti has made their mark on the cultural scene in Punjab.