Sardar Buta Singh, an astute politician, assertive minister and involved community leader (March, 1934 – January, 2021) passed away on January 2 at the age of 86. He was a dalit leader of stature after Babu Jagjivan Ram. With the demise of Sardar Buta Singh country has lost a leader by his own right. 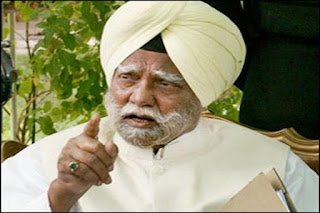 Buta Singh was born and brought up in Jalandhar in a socially and economically marginalized family. I am told that he was a Pathi (who recites Guru Grant Sahib) in his early years in his village Mustfapur. With his sheer grit and untiring spirit, he graduated from Layalpur Khalsa College and came under the influence of Master Tara Singh and the Akali Dal. While pursuing his education and apprentice in politics in Jalandhar, he tried his hand in journalism under the patronage of The Ajit, The Akali Patrika among other vernacular media organs besides activism as a student leader. Master
Tara Singh sponsored him to do his Master degree from Guru Nanak Khalsa College in Bombay (Mumbai). He was an orator with a deep knowledge of Sikh scriptures and ethos who could make the audience spell bound. I recall a personal experience sometimes in 1975-76 in Delhi when he was a junior Minister in PM Indira Gandhi’s government, at a function to celebrate the Gurpurab of Guru Ravidass ji. Along with him, some senior IAS officers were there as guest of honour. He spoke with his usual candor in a humble way, which was his strength, and said that he was a humble public functionary as a politician and my friends in bureaucracy present here choose to become rulers and administrators whereas he choose ‘Fakiri”. I was impressed by his delivery. There is yet another anecdote which I recall when I was posted in the PMO in mid 1970s. One day he came to PMO for a Cabinet meeting after his first appointment as Deputy Minister for Railways. I was standing in the corridor of PM’s Office with my boss Vimla Behnji who knew Buta Singh very well being close to the Nehru-Gandhi family. Vimla Behnji greeted him and said that Bhai owed her a big gift. Buta Singh smiled and stopped with folded hands and responed “Behanji, Tushin Hukam Karo, Tuhada Chotta Veer Hazir Hai” I found that he was a good communicator with an impressive personality.

With qualities of head and heart and down to earth approach, Buta Singh succeeded and rose to adorn many coveted positions in many governments as senior Minister, MP for record 8 tenures, Chairman of National SC Commission, Governor Bihar among others. He was an astute politician with an undoubting sense of survival among controversies. His role as Home Minister in Ram Janambhoomi, building Akal Takhat in the aftermath of Operation Blue Star, sacking of a number state governments, and controversial role as Governor of Bihar may be cited as some of the actions which kept him in the limelight of politics and governance. On the flip side, I was told by some of my friends that his role in creating division among the Chamars or Ad-dharmis on one side and Balmikis on the other (Buta Singh himself was a Mazahbi Sikh) for short term political agenda was not liked by the SC communities at large. Anyway, let us take a human view that ‘nobody is perfect’. Sardar Buta Singh was a leader of worth by his own right. My humble tributes to Sardar Buta Singh.

Posted by ramesh chander at 5:17 PM