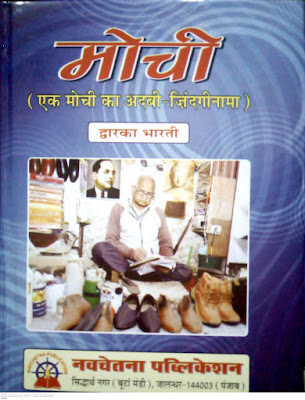 While reading Dwarka Bharti’s recently released book - MOCHI – Ek Mochi Ka Adbi Zindginama), I was reminded of a famous phrase – From Log House to the White House -  attributed to President Abraham Lincoln of the USA and thought of giving the title - From
Mochi’s Theeha (shed) to IGNOU (Indira Gandhi National Open University) for the book review in hand. The book Mochi was released some days ago at the Budh Vihar at Sidharath Nagar (Bootan Mandi), Jalandhar, my native place, at a simple ceremony by invoking the Trisharan – Buddhist invocation by Harmesh Jassal, and launched by a renowned writer and rational thinker, Dr. Surinder Ajnat in the presence of  ardent Buddhists and staunch Ambedkarites, Lahori Ram Balley and Ramesh Sidhu both intellectual friends of the author, Dwarka Bharti. It has been published by Navchetna Publications of Varinder Kumar. I could guess that Dwarka Bharti was also a Buddhist, an enlightened person in the literary sense of the word. Dwarka Bharti himself wrote in Chapter 8 of the book – The Baghi Mochi - that the vagaries of life and literature had changed the course of my life. I was not simply a cobbler now who nailed in the sole of shoes but a rebel (Baghi) who will nail and stand against the people who had been nailing the society for long. The entire narrative in the book dwells on this theme of transformation from a low caste Hindu and a follower of Radha Soami of Beas to the equitable order of Gautama Buddha. In the process, it is evident that Dwarka Bharti has really come a long way from a marginalized Mochi to a recognized Intellectual with his sheer mental and spiritual faculties in spite of the fact that he did not get opportunity to get formal educational degrees. He participates in prestigious literary meets and seminars, writes in acclaimed literary magazines and papers, worked on the coveted position of a member of the syllabus committee of IGNOU as a proud literary personality. Dwarka Bharti is also one of past Presidents of Ambedkar Mission Society of Jalandhar like Surinder Ajnat. The book makes a good reading.  The life of the author could hold as a good motivational story. The book has been rightly dedicated to “Andheron Ko Bedhne Mein Sanlagn Tamaam Kalmon Ke Naam” (to the pens engaged in removal of darkness).

The introduction of the book has been written by the author’s long time friend and guide and himself a literary personality of standing Dr. Surinder Ajnat who also launched the book. Justifying the title of this review – From Mochi KA Theeha (shed) to IGNOU – let me endorse Dr. Ajnat’s comment on Dwarka Bharti’s poem which forms the part of post graduate course in IGNOU – Aaj Ka Eklavya – “Bharti ji Ki Bhasha Bahut Sashakt, Chust aur Vishyanukul Hai. Us Mein Vyangaarth Ka Udaharan Dun To Yeh Hoga: Ki Ab Angutha ‘Katvaiya’ Nahin Jayega, Sirf ‘Dikhaya’ Jayega” (now the thumb will not be allowed to be cut instead it will be used as a symbol of revolt).

In the prologue – EK Nazar Idhar, the author himself says that the book was not an expression of self-pity – “Prastut Zindginama Ek Mochi Ki Rudankatha Nahin Hai Balki Chamde Ko Mathne Ke Saath Saath Ek Aise Sahityik Mochi Ke Jiwan Ki Katha Ke Mukhya Ansh Hain.” The book has been divided into 9 chapters starting with Mochi Ka Theeha (Shed of a cobbler) and concludes with his poem “Aaj Ka Eklavya” which is prescribed in the syllabus of MA classes of IGNOU – From Mochi Ka Theeha to IGNOU. Dwarka Bharti has no inferiority complex that he is a Mochi and rightly so. He narrates interesting stories of his school days where even the teachers like Vidya Sagar among others treated him shabbily because of his low place in the social hierarchy. The caste divide and discriminatory treatment even at Radha Soami Dera aptly explain the deplorable practices at our centers of spiritual and social outfits. The author tells a curious incident when his own father-in-law Mani Ram scolds him, with disdain, that he (Dwarka Bharti) was nothing but a Mochi and should remain in his lowly limits. This incident touched the author’s sensitivities and pushed him further to rebel against the social order based on inequalities. The author’s sojourns to Jordan and Iraq for earning his bread and butter helped in opening his vision further which helped him in carrying forward his interest in literature.  As regards his contact and interaction in the literary circles particularly the so called “Dalit Sahitya”, while reading the narration one virtually finds a directory of Who’s Who in the academic and intellectual sphere. This easily explains that Dwarka Bharti enjoys a status of wide recognition in literary circles of India. Yet another interesting feature of the book, at least for me, remained that some well known names whom I happen to know personally do appear in the book as associates and co-players of the author namely; Lahori Ram Balley, Surinder Ajnat, Gian Singh Bal, Mohan Lal Philloria, Balbir Madhopuri, Desh Raj Kali among others. It was a matter of gratification for me to learn further about the life and mission of Gian Singh Bal from the book. The Chapter – Ek Baghi Mochi says all about the transformed status and state of mind of the author who termed himself as “Nir-ishwarwadi” who stands against social ills generated and perpetuated by “Ishwarwad” of various religious orders. There are many more like Dwarka Bharti and I have nothing to comment on his candid view point. But sometimes, as a layman, I surmise as to why liberated or transformed minds should be dogmatic about certain things? Dwarka Bharti is a practicing cobbler or Mochi but he consciously chooses not to hang a picture of Guru Ravidass, the lone icon of all Mochis, at his Theeha (shed). I could see the picture of Babasaheb Ambedkar at the author’s work place. Frankly, I find a tinge of some sort of complex, perhaps subconsciously, in the mind of the author. I don’t think even Lord Buddha professed this kind of rigidity or dogmatism. The answer may lie in the fact that we are still to go a long way in the journey to liberate ourselves from narrow considerations. Nevertheless, I fully know we are all human.

I take this opportunity to congratulate and thank Dwarka Bharti and Navchetna publishers for giving us much needed food for thought in their book - Mochi to face and address the societal maladies. I recommend the book to my friends and discerning public. With this, I conclude with a Shabad of Guru Ravidass which says much:

Posted by ramesh chander at 5:41 PM