S.C. Commission Ch Mere 6 Saal is said to be an account of the Chairman of the Punjab SC Commission, Rajesh Bagha. It is also claimed to be an auto-biographical narration but the contents, if I venture to say frankly, do not justify the claim. I think, Rajesh Bagha, is an educated and well groomed political and social activist under the wings of RSS and the BJP. His biography is still in the making. It is better to wait and see. Rajesh is a good friend of mine and I take the liberty of saying this at the risk of getting misunderstood. But my intension is positive and complimentary.

In the brief prologue of the book, he has clearly indicated that even after completion of his tenure as the Chairman of the Punjab SC Commission in November, 2017, he intended to keep the oil burning in the journey of his social and political work. Rajesh has frankly indicated that it could become possible only with the active support and involvement of Desraj Kali, a community activist and a renowned and duly recognized figure in the acclaimed literary circles not only in India but beyond. The book clearly carries the signatures of Kali Sahib in the prose and presentation. Desraj Kali is also a dear friend of mine. It is a matter of gratification.

The book has 15 chapters spread over 112 pages. Many chapters carry verbatim record of some important meetings of the Commission and decisions taken. It seemed a routine aspect but a couple of pointers came to fore. One, the system, or say the government did not attach much importance to the Commission and its functioning, though it is said to be a statutory body. The low level of official representation at the meetings deputed by the Departmental or Divisional Heads where they were supposed to be 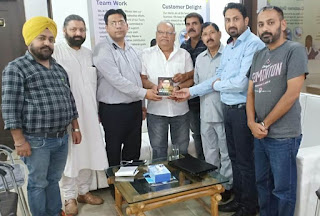 in attendance was disturbing. The financial crunch and lack of proper working tools like computers and other apparatus and also human resources i.e. staff, obviously, adversely effected the functioning of the Commission. Chairman Rajesh Bagha tried his best, given all the constraints, to set the position in order but it appeared the political bosses did not have the will to provide teeth to the Commission.

The first Chapter touched upon the social and economic condition of the Punjab Dalits in the changing socio-economic and political scenario. Chapters 2 and 3, if I say so, are the only pages where the auto-biographical aspect found some space with regard to Rajesh’s initiation into RSS fold and his political affiliation with the BJP. Rajesh Bagha carefully chose his path which helped him to find his due place in the BJP hierarchy. He became President of the BJP’s SC Morcha at a young age under the able stewardship of now President Ram Nath Kovind. Incidentally, it may not be out of place to mention that Rajesh came to our family home in Jalandhar to meet my brothers Krishan Lal and Paramjit along with Ram Nath Kovind Sahib in 2006 for a political rally “Dalit Bolia Shinghasan Dolia” at Bootan Mandi. Kovind Sahib, one of our family friends, was an MP and President of the SC Morcha of BJP. Kovind Sahib’s gracious wife Savita Behen is a close friend of our sister in Delhi, Kamla Kumar. Rajesh rose up the ladder in the party and was made the General Secretary of the Punjab BJP and rightly so before his appointment in 2011 as the Chairman of the Punjab SC Commission, a well deserved position and an important job. While the book under review is awaiting its formal release and launch, Rajesh Bagha has been made the Vice President of the BJP in Punjab, yet another high position in the party. Congratulations to the young and energetic Rajesh. Chapter 3 is devoted to his family. Rajesh’s upbringing and thinking, it seems, have been influenced by the personalities of his UK returned grandfather, whose name should have been mentioned, and his elder brother Tilak Raj ‘Bhalwan’, the Punjabi version of Pehalwan or wrestler. Rajesh himself was a sportsman of sorts and remained a wrestler. It is a matter of satisfaction to note that he was never a politician or social activist depending financially on others and ran successfully his restaurant and community palace to earn his bread and butter. Of course, these business establishments helped him dig his roots and also make and nurture his political associates in his chosen career.
Rajesh considers that the issue of reservation should be seen not through the prism of economics but through the social background.  He is of the view that good results and resultant positive impact of reservation is much visible in Punjab. There is a need to harness 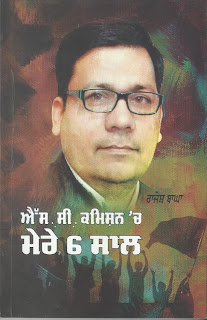 and channelize the newly generated energy among the dalit youth to make them equal partners in the social, political and economic order of the country and the society at large. Surprisingly, in spite of his political affiliation with the BJP, Rajesh Bagha is a fan and follower of Babu Kanshi Ram. It fully demonstrates his strong sense of understanding and conviction. I liked his narration, attributed to Babu Kanshi Ram, when answering a question from the media that BSP had not issued its election manifesto Babu Kanshi Ram replied that Shri Guru Granth Sahib was his manifesto. Rajesh has rightly termed that Babu Kanshi Ram was not a person but a phenomena.

Rajesh Bagha has listed some of his major activities and contribution towards empowerment of dalits of Punjab during his tenure as the Chairman of the Punjab SC Commission viz. Post-Matric Scholarships for dalit students, allotment of common land to the dalits for agriculture, redressal of complaints of high handedness and discrimination against dalits in the villages and government services, celebration of 125th birth anniversary of Dr. B.R. Ambedkar in a befitting way involving the bigwigs and the academia in the process, demand for revival of Chamar regiment, inter alia. These are not small achievements but it could have been better if the government and the political bosses could have extended all due help and facilitation to the functioning of the Commission and its Chairman.  Frankly, I was expecting some firework in the book exposing the Thekedars for putting hurdles in the functioning of the statutory Commission on account of their own hidden agenda. But it was not to be. Rajesh Bagha has promised the second part of the book. Let us hope to listen something more to make a full assessment both of Rajesh Bagha as Chairman of the Commission and the Commission itself. Nevertheless, I am impressed by the simplicity and unassuming nature and demeanor  of Rajesh Bagha as clearly narrated in the last chapter of the book when the security guards of a leader in Chandigarh mistook him as the driver and treated Des Raj Kali as the VIP.

Posted by ramesh chander at 5:42 PM