Poona Pact of 1932 – A Cursory Appraisal

Poona Pact of 1932 was signed on September 24. Today, is the anniversary of this unsung and forgotten but important pact which was signed by Babasaheb Ambedkar and upper caste Hindus led by Pandit Madan Mohan Malviya to save the life of Mahatma Gandhi who had undertaken a fast unto death to oppose the Communal Award of PM Ramsay MacDonald? In the aftermath of the Round Table Conference to address the communal issue, PM Ramsay MacDonald gave the award on August 16, 1932 in which all the minorities including the depressed classes or dalits were given separate electorates to elect their representatives to the provincial and central legislatures. Mahatma Gandhi opposed Dr. Ambedkar, who pleaded for separate electorates for dalits, and termed him as “unrepresentative” of the depressed classes even at the 2nd Round Table Conference. Having failed to convince the British rulers, Mahatma Gandhi resorted to the coercive and clever method of fast unto death, to undo the communal award. The entire leadership of the Congress party and hardcore Manuwadis stood against Dr. 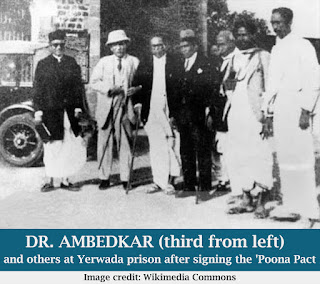 Ambedkar and even threatened him of dire consequences to the extent of endangering his life. The emotions were raised to a sort of frenzy, terming Dr. Ambedkar as an ‘anti-national’ and ‘anti-Hindus’. Mahatma Gandhi was of the view that the separate electorates to dalits would “slowdown the integration of the depressed classes into the society”. He did not oppose separate electorates to others but to dalits. It was a clever ploy, as some critics observed, to keep dalits under the subjugation of upper castes as ordained in the traditional texts of Hindus. While promising to undertake the issues of untouchability and empowerment of the weaker sections of the society, Mahatma Gandhi opposed the communal award tooth and nail and said that it was an “injection of poison that is calculated to destroy Hinduism and do no good whatsoever” to the society.

The Poona Pact was formulated under such diverse and difficult political and social scenario. The objective and intention of Mahatma Gandhi was to save Hinduism at the pretext of social cohesion at the cost of rights and dignity of dalits on one hand and on the other Babasaheb Ambedkar was concerned about the welfare and empowerment of suppressed and oppressed people of India. It was a challenging situation. Dr. Ambedkar was a nationalist to the core. He was a spiritual person with a strong moral standing. Dr. Ambedkar succumbed to the pressure and machinations of Mahatma Gandhi and other Hindu leaders who were raising the bogey of saving the life of Mahatma Gandhi who was continuing his fast unto death in the Yerwada jail at Poona now Pune. The Poona Pact, a turning point in the Indian history and the position and space of dalits in the polity and society, was signed and Mahatma Gandhi ended his fast unto death. Some analysts termed it as “Ambedkar won the battle but lost the war to safeguard the rights of dalits” to save the life of Mahatma Gandhi and maintain the social cohesion and also the momentum of struggle for independence from the British as a true nationalist and human par excellence.

The Poona Pact carried forward the concept of reservations propounded by William Hunter and Mahatma Jyotiba Phule in 1882. It carried 9 clauses stipulating, inter alia, 148 reserved seats for dalits under the joint electorates (dalits clubbed with Hindus) as against 71 seats reserved for dalits under the separate electorates as provided in the communal award of PM Ramsay MacDonald. It was provided to give special consideration to dalits in civil services and sufficient educational facilities. The Hindu leaders under Mahatma Gandhi agreed to launch a movement against untouchability and care for empowerment of dalits with a view to integrate them with the main stream of the society. These pronouncements were made by the leaders at a conference in Bombay, now Mumbai, on September 25, 1932 in which Dr. Ambedkar also participated. He endorsed the Poona Pact in the larger interest of the country and the society. The necessary and relevant provisions of the Poona Pact were duly incorporated into the subsequent legal framework including the constitution of free India. The rest is history.

Since the Poona Pact of 1932, much water has flowed into the Ganges. It is time to have an appraisal of the pact in the given and current socio-political and even socio-economic status of dalits in India even after almost 9 decades. Not long after the signing of the pact, the dalit leadership led by Dr. Ambedkar expressed their regret and dismay on the outcome and results and even behavior of the upper castes to address the problems of dalits. All India Scheduled Castes Federation of Babasaheb Ambedkar in its Madras, now Chennai, session in 1944 passed a resolution and demanded separate electorates for dalits.  Dr. Ambedkar took up the matter with Lord Irwin and Winston Churchill appropriately to get the separate electorates as stipulated in the communal award. The reason for such a change in their approach was the non-serious attitude of the upper castes and the society at large to address the issues of untouchability and empowerment. Moreover, it was felt that the reservation of seats in the joint electorate tended to promote and elect stooges and yes-men who were not the true representatives of the suffering masses. Even after independence and provisions in the constitution of India, the question of true representation and social acceptability of dalits remained an issue.  Babasaheb Ambedkar along with his several lakhs of followers converted to Buddhism in October, 1956 to end the social and spiritual subjugation of dalits. The subsequent developments and leadership under the likes of Babu Kanshi Ram underlined the ground situation and demanded to rectify the situation appropriately to get the true representatives of dalits elected to the legislatures and parliament.  Babu Kanshi Ram’s book “Chamcha Age” published in 1982 addressed the issue threadbare. The question of reservations in services and educational institutions attracted the attention of the community and its leadership in the face of unplaced clamour and opposition of the so-called general classes or say Manuwadis. These issues tend to generate avoidable heat and animosity in the society which is termed as ‘unwarranted and dangerous’.

Let us try to find answers to some of the relevant questions in this regard. In spite of constitutional provisions, has untouchability and caste system been abolished? The answer is a big NO. Did political reservation in the legislatures help? Again the answer is a big NO. In the given political arrangements, the dalit representatives are nothing but glorified ‘Chamchas or Stooges’ as termed by Babu Kanshi Ram. Reservation in the general electorate has no meaning. It seems separate electorates are the answer. Political polarization of dalits on the basis of issues pertaining to their empowerment and integration into the main stream of the society is much needed to address the issues of caste, social, economic, educational and political marginalization of dalits. The so called general class or Brahmanwadis oppose reservation of dalits in the services and educational outfits. Is it justified? Not at all. Are they interested in abolishing caste discrimination? Do they tend to claim their share in the dirty work like manual scavenging and going down the sewer? No they want to have the cake and eat it too. The general class must know that these special provisions or reservations for the weaker sections of the society were not given voluntarily by sweet will of the rulers and the society. These were earned and obtained by a relentless and right struggle by the suffering humanity under the leadership of Dr. Ambedkar and his associates. His heirs are interested in maintaining these till the lofty ideals of ‘Equality, Liberty and Justice’ as enshrined in the constitution are attained to usher the country into much needed ‘Harmony’.  Could we succeed in transforming our political democracy into a social and economic democracy, as visualized by Babasaheb Ambedkar and other leaders? Again the answer is in the negative. Let us have a sincere introspection to answer these questions on this day of the anniversary of the Poona Pact which was an instrument to preserve the social and political order and to maintain the momentum of our struggle for freedom from the British rulers. The issues of dalits should be addressed with all sincerity before it gets too late. They contributed much in sacrificing their ‘identity’ under the Poona Pact in the larger interest of the country to defeat the often alleged ‘Divide and Rule” policy of the British. We will ignore this historical background at our own peril.

Posted by ramesh chander at 6:35 PM