Rahul Gandhi’s Kailash Mansarovar Yatra – Rahul Gandhi has arrived in the political firmament of India, it seems. But, let me add hastily that he is yet to reach. His position and space i.e. “Dasha and Disha” will be decided by the elections of 2019. Many new stories about him, good and bad, are discussed in the media not to tell the truth to hapless voters or general public but to camouflage and confuse things, unfortunately. I take one such issue, Rahul Gandhi’s on-going Kailash Mansarovar Yatra. The forces opposed to Rahul Gandhi including the pliant media, I think, are making unnecessary noises to cater to their political ends. General public is not interested and is totally unconcerned. The Mansarovar Yatra is a private matter. There is no need to highlight the issue. The media and the BJP, if I 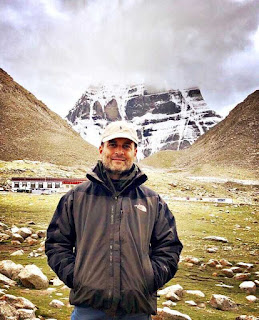 go by the debates being conducted on the electronic media, are dragging in China in the matter which is totally unwarranted. Kailash Mansarovar is located in China. There is no way one can go there without going to China. What is the issue? Why has Rahul Gandhi gone to Nepal first and from there he has flown to Beijing? Whom he would meet and why? These are irrelevant and bizarre questions particularly because of the security aspects of the one who is having the highest category of security umbrella provided by the government of India. He is also a leader, President of the one of oldest political parties which is also the biggest opposition party. Rahul Gandhi is also the scion of Nehru-Gandhi clan which ruled the country for decades. And as such he enjoys his own political and social standing not only in India but also abroad. It would be better for the subservient media and the vested political interests to rise above petty politics particularly the China connection. It is a sensitive matter. It has already become a laughing matter. Media, knowing full well that it is a non-issue, still showing exclusive interviews a Minister terming the photographs of Rahul on the yatra as fake and photoshopped. It is the height of lopsided reporting at the cost of hapless public. Rahul Gandhi to put the things in perspective tweeted “The waters of lake Mansarovar are so gentle, tranquil and calm. They give everything and lose nothing. Anyone can drink from them. There is no hatred here. This is why we worship these waters in India.”

Now I come to some diplomatic insight as a humble player in game of diplomacy. The opponents of Rahul Gandhi have raised a question on the said interest and request of the Chinese Ambassador in New Delhi to go to the airport to see off Rahul Gandhi leaving for the Kailash Mansarovar Yatra. There was no diplomatic “not to do” in this. Rahul Gandhi President of one of major political parties of politics in India. He is the young face of Indian politics in the years to come and is the flag bearer of the cherished legacy of India. Any Ambassador stationed in India will only be too happy to avail of an opportunity to come closer to the current and future leadership of India. Why one shall find fault with the Chinese Ambassador when Rahul Gandhi was going to his country. It is a recognized diplomatic nicety. I think any Indian Ambassador should have done the same, in such an eventuality.

RSS Invitation to Rahul Gandhi - Yet another non-issue and an hypothetical proposition of RSS’s intended invitation to Rahul Gandhi to come and join them at some meeting/dialogue to be fixed and arranged in Delhi along with other political and academic personalities in September, 2018. As usual, the so called ‘Bhagat” electronic media made it a big issue and wasted hours in discussing Rahul Gandhi and RSS’s masterstroke. The RSS invitation is yet to come. Obviously, Rahul Gandhi would respond to it as he considers fit and proper. Where is the need to raise the dust to blind the general public?
As regards whether Rahul Gandhi should accept or decline the invitation,

my personal thinking is that he should accept the RSS invitation to join others to say their mind as openly and candidly as they deem fit to address the challenges before the country. We are living in a democratic country. There is no harm to sit and discuss issues of interest and concern. RSS is the biggest outfit engaged in socio-cultural life of India with an enormous political clout. There is no point in treating them as ‘untouchables’. More over the ‘caste system’ has been abolished in India. RSS, though still considered a ‘Manuwadi’ organization by the large chunk of dalits, is to prove itself that they stand for social justice and equality as stipulated in the Indian constitution and not in the traditional Hindu texts.

Posted by ramesh chander at 9:56 AM