Some Random Thoughts of an Aam Aadmi

After joining public life towards the end of February this year, I 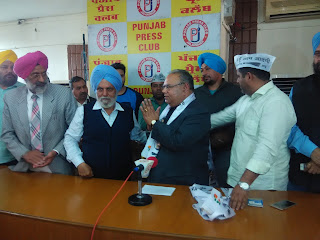 shared some of my impressions in these columns as a new recruit in politics under the banner of the Aam Aadmi Party (AAP). I am a humble volunteer or a worker of the AAP and as such write this from my personal perspective as a student of this game called politics.

The AAP is a new political party born out of a movement against corruption. The agenda and the vision of the party is to remove corruption, establish grass-root democracy (Swaraj), transparency in administration, social empowerment with bottom to top approach to bring about transformation and change i.e. Parivartan (systemic change).  These lofty ideas appealed to me, as I wrote earlier also, and I joined the AAP to make my humble contribution towards that much needed and visualized Parivartan.

Unlike the other political parties, I have found that the AAP does not project new entrants as leaders but make them work as volunteers and workers. Some of them may become leaders but it would happen through the process only. The observers appointed by the central leadership in Delhi work with the local coordinators to carry forward the agenda of the party and to look after the organizational aspects. The volunteers and workers are advised and directed by the observers and coordinators with regard to the activities of the party. Being an Aam Aadmi and an ordinary member of the party, I have been following the directions and conducting myself accordingly with regard to the party activities as a dedicated student. I think my total involvement will get registered.

Public contact is one of the important aspects of public and political life.  I remained in this business but from a different perspective as a faceless diplomat. By now, I have realized that in politics, it is done in a different fashion. One needs to be pushy and noisy. One needs to be visibly vocal and loud mouthed. One needs to be artificially humble. Let us see, how best I adjust myself to these requirements. Some of my friends advise me to throw myself into the thickness, if I want to succeed in politics. I have seen some of my fellow workers in the party, who aspire to be leaders and party candidates in the forthcoming elections in Punjab, know these unwritten rules of the game quite well. These slogan shouting, loud mouthed leaders engage some non-descript, uneducated and gullible young fellows, whom I term “Bhade Ke Tattoo”, and create scenes at public meetings. I don’t know how the party leadership views them but I despise and dislike them. The AAP is a party with a difference and we are to prove it. Let us develop some good political culture and precedents so that good people, sober people, considerate and thinking people could come and join politics for the greater good of the polity and society. Let us bring some dignity and decorum to the game of politics. Apart from numerous nukkad meetings in the area (Jalandhar West), I have had opportunities to speak briefly at the AAP Jan Sabha at Basti Guzan, Ambedkar Jayanti celebrations at Desh Bhagat Yadgar Hall and the AAP volunteers meeting at Victoria Gardens. It was a unique experience. As a diplomat, I was used to deliver both structured and impromptu 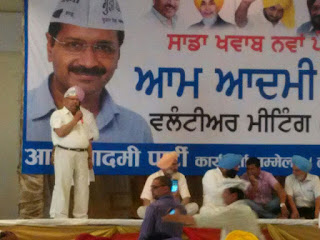 speeches on different occasions without any hassle. The juniors like me are made to rush and finish. The loud mouthed, referred to above, are apt in presenting and keeping themselves on the mic whereas the protocol conscience and disciplined fellows like me find it difficult and succumb to the dictates of the stage managers. Another problem is the timing and schedule of functions and engagements. We tend to pass this as a joke ‘Indian standard time’ rather than showing any inclination to maintain the time and schedule. As a result, most of the time, I claim the honour to be the first at least in this exercise as I could not manage to be the first in other substantive aspects of life. Some consolation! My party managers advised me informally that I should try to register and increase my presence at public functions. I tend to accept and honour their advice, but it is difficult to imbibe the culture of pushing around and elbow out the friends of my own political clan. Nevertheless, I am determined to survive and prevail.

The AAP is a transparent, democratic and an open party. The manifesto for the forthcoming elections in Punjab is under study and formulation under the newly devised dispensation called “Punjab Dialogue”. The experts are meeting the cross sections of the society to elicit their views on various subjects and matters of concern and interest. They are yet to come to Jalandhar where I reside. But on my own, I have already made suo motto, suggestions and observations for consideration particularly with regard to some of the issues pertaining to a sizeable, about 32% in Punjab and around 40% in some of the constituencies in the Doaba region, dalit community. The dalit community will play an important role in the politics of Punjab. 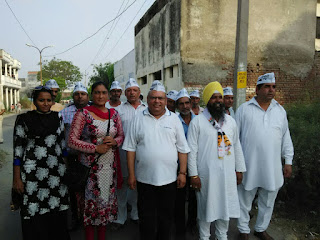 under the flag of the AAP. In the process of learning the tricks of the game, I am open to any suggestion and advice from my friends, well wishers, supporters and above all my party observers, coordinators and managers. I recall some lines of Hindi poetry: